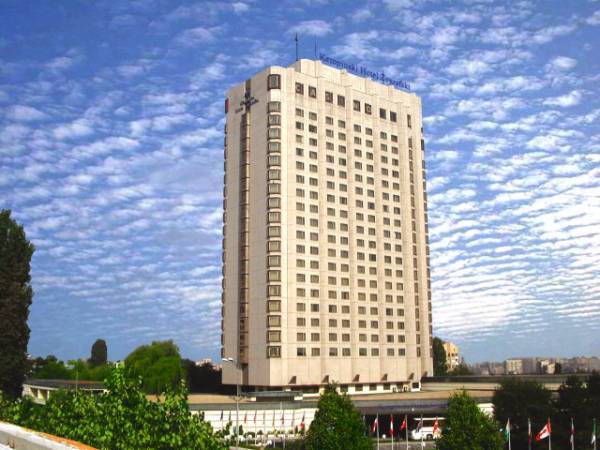 A VIEW ON THE ZEN GARDEN

LOCATION
One of the most prestigious hotels in the Bulgarian capital is named after the entrepreneur Ivan Zorgrafski, who took over the hotel in 1997 and incorporated it into the famous Kempinski hotel chain. The 21-storey tower is a widely visible symbol of the prestigious Lozenetes neighborhood. The hotel is a veritable ‘small town’, comprising an area of over 30,000 m2 and including the largest hotel convention centre in the capital. It is also close to the largest convention and cultural centre of Bulgaria, the National Palace of Culture.

ACCESSIBILITY
The hotel is located at the edge of the city centre. Traffic in Bulgaria is quite chaotic, so it is best to leave it to the city’s experienced taxi drivers. Taxi drivers will get you from the airport to the hotel in about 15 minutes. It is recommended that the price is agreed upon in advance, otherwise a very cheap taxi ride could become very costly. From the hotel to the city centre it is not far away, on foot about 10-25 minutes. It is also close to the metro station, which is very inexpensive and well organised. Another advantage is a large hotel garage should you arrive in Sofia with your own car.

COLD APPETISER – Architecture and aesthetics
Sofia defines an intertwining of the old and new, which is mixing with every step. The hotel has an interesting architectural history. It was built between 1974 and 1979 in line with plans by the famous Japanese architect Kisho Kurokawe. In a striking modernist skyscraper the most interesting detail is a Japanese garden with a house and a lake, which is a copy of the garden in Tokyo’s Hotel New Otani. Otherwise, the architecture raises mixed feelings today. Lovers of modernism will like the building, but to many the building is reminiscent of East European socialist realism.

WARM APPETISER – Personnel and culinary offer
The personnel is not always at the level that one would expect from the famous hotel chain. At multiple visits one can have a variety of situations that range from complete professionalism and kindness to cold and even arrogant reception. On the culinary side, it is one of the best hotels in the capital. Six restaurants and two bars are adapted to different tastes. Particularly impressive is the national restaurant Lozenets, where it is worth trying typical Bulgarian specialties that are a blend of Balkan and Turkish influences. The menu is dominated by various types of meat and the famous oriental sweets, such as baklava and lokum. The hotel’s Happy Sushi restaurant is probably at this moment the best sushi in the city.

MAIN COURSE – Congress and hotel offer
On taking over the hotel they have tried to adjust the hotel rooms to the standards of the Kempinski chain, although compared to other hotels in the chain the rooms are too small and not well enough equipped. They would be more suited to 4**** standard, also because of the relatively tired furniture that has otherwise had exemplary maintenance. The rooms that are the weakest part of the hotel and are calling for an urgent renovation, which is already being carried out. Therefore, it is worth requesting rooms in the renovated part of the hotel. The largest hotel convention centre in Sofia can accommodate up to 700 guests in a plenary setting in the multifunctional hall Sofia Grand. Three medium-sized meeting rooms – Kyoto, Vitosha and Silhouette – can each take 100 guests. In addition, there are 6 smaller meeting rooms available at the hotel.

FLOP – NEGATIVE SURPRISES
The old and not yet renovated rooms are not at the level one would expect from the Kempinski hotels.

OVERALL IMPRESSIONS AND CREDIBILITY
Reasonable prices, a solid selection of restaurants, beautiful views from the rooms (especially to the Vitosha mountain) and a great convention centre are the main advantages of the hotel. Still, the hotel is far from the standards of other hotels in the Kempinski chain. The most disturbing aspects are the lobbies and other public areas, which call for urgently needed renovation, and the inconsistent services. In a final evaluation the hotel fits more readily into the four star category and does not reach the five star standard, but because of the diversity of the hotel offer in combination with the cuisine, a large number of rooms and the overall spaciousness it is still a very good choice for meeting planners. 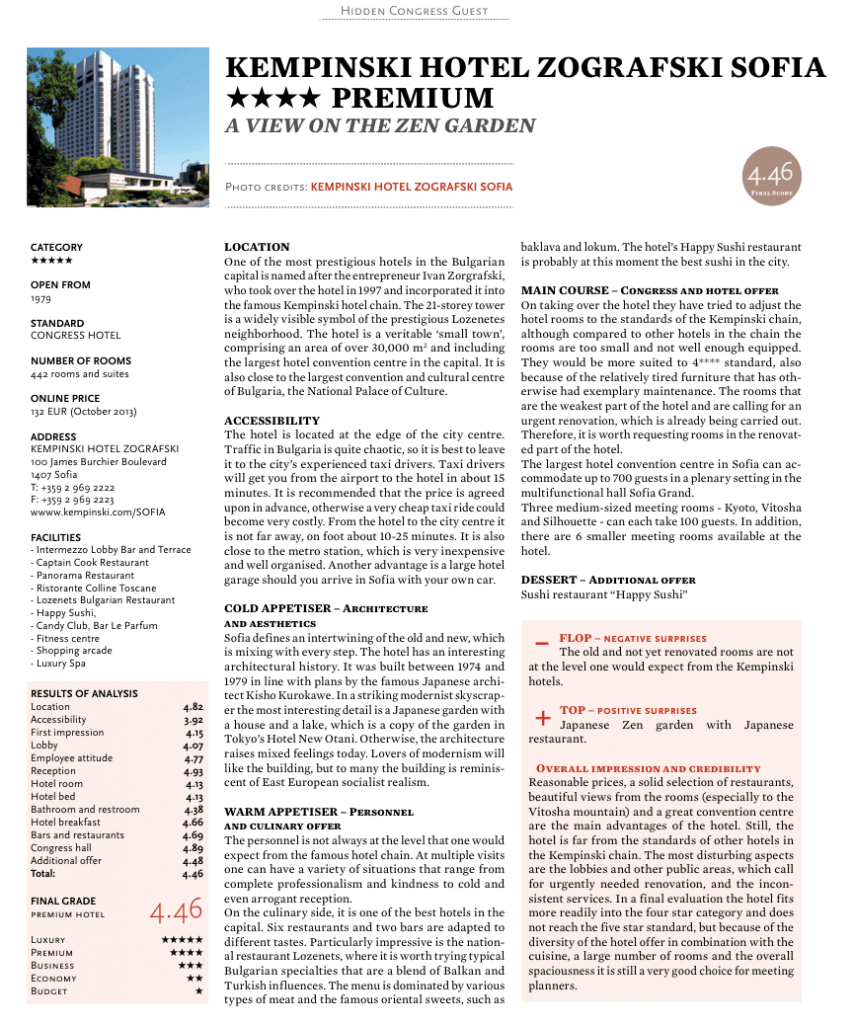