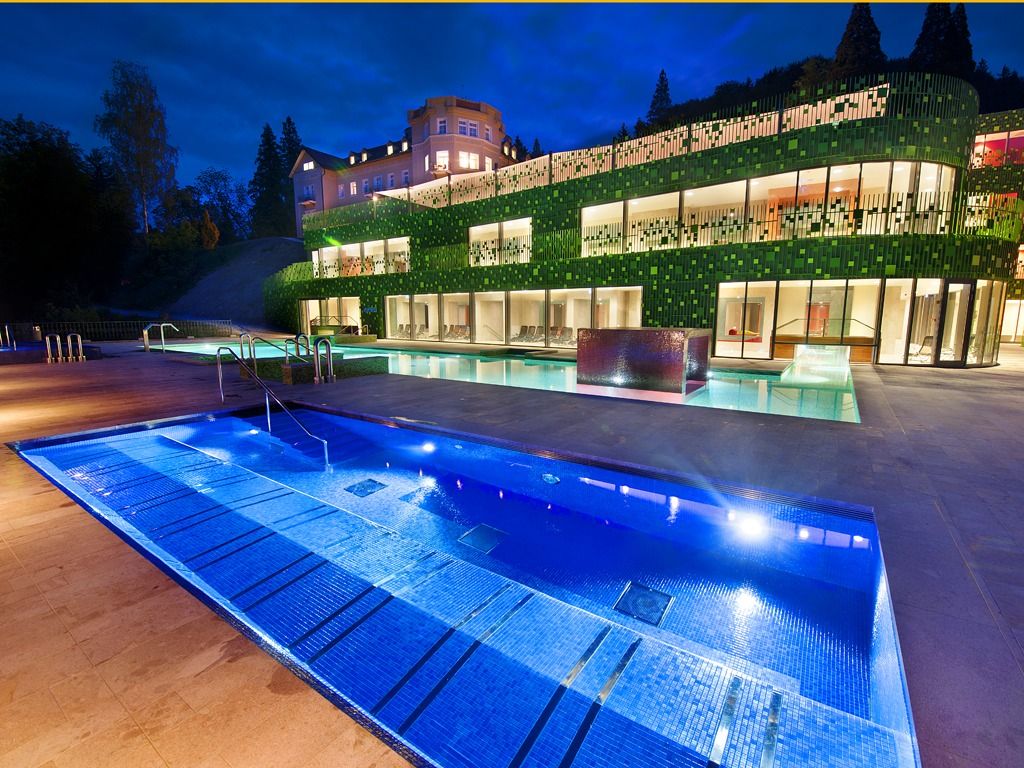 LOCATION
The oldest Slovenian spa was discovered by the Romans as early as 39 BC. The turbulence of history did not spare the Spa, but despite changing times the spot by the Savinja River was again settled by optimism in 2011. It would be fair to say that the entire history of the place is based on the healing water that springs from the forest on the side of the Stražnik hill. The spa lies outside of major settlements in the valley, in the middle of undulating terrain, and is surrounded by magnificent forests and a beautifully landscaped spa park. It is an ideal location to disconnect from everyday stress and indulge in holistic incentives and other congress programmes.

ACCESSIBILITY
With the development of the Vienna – Trieste railway line in 1849 the Roman spa underwent rapid development to become world-renowned. Even today, the rail link remains favourable both in the narrow and wider sense. Besides accessing the Roman spa that lies halfway between Ljubljana and Maribor, in the current economic situation rail is becoming a more and more attractive sustainable mode of transport. Parallel to this, the Celje-Zidani Most link was mostly developed with access to the Slovenian highway cross in mind. Transport links to airports, however, fare less well; here the Roman Spa shares the same fate of Slovenia’s air accessibility with other providers in the region.

COLD APPETIZER Architecture and Aesthetics
The Spa was formed and developed throughout different periods and consequently they have tried to connect building complexes at each renewal with a meaningful link. It consists of two main buildings – the Roman and Sofia Mansions, which are now connected with the new hotel complex, called the Rimski dvor (Roman Court). The new part connects two different hotel styles in a coherent and environmentally friendly way, and is also pleasant to the eye. It seems like the new part of the hotel is growing organically from a forested hillside. However, the look of the hotel is quite an achievement, especially if we take into consideration its original architecture and that the dynamic architectural communication and passage between buildings requires some adjustment. A special feature is the spa park with exotic trees and walking paths, which is inherently Zen and anti-stress.

WARM APPETIZER – Staff and Food
The staff is friendly and hospitable, and it is evident that the hotel management is under an experienced woman’s hotelier hand. The culinary offer is currently classic, but with a bit more innovation it is likely that things will turn to a more creative direction. Guests count mostly on the a la carte restaurant in Sophia. The cuisine deserves a bit more attention and local specialties should also be looked at and included in the offer.

MAIN COURSE – Congress Hotel offer
Hotel rooms are good quality and in the Sofia Palace are bordering on prestige. A few small add-ons that would take the hotel into a higher grade are missing. Overall it is pleasing, harmonious and modern. The soothing views and vistas from the rooms are particularly inspiring. The Congress Centre is spatially flexible enough to be fully competitive to rivals in the class of up to 250 participants, although there is slightly less space than in neighbouring Thermana. With quality interiors and technical equipment, however, we estimate the congress centre to be very close to ideal.

DESSERT – additional offer
Bathing in the historic spa’s traditional baths, the thermal water quality and the exclusivity of the whole wellness experience.

FLOP – NEGATIVE SURPRISES
Complicated hotel logistics, from the entry to the garage to orientation around the hotel.

TOP – POSITIVE SURPRISES
Latin proverbs, which are located in different areas and contribute to the positive effect of staying at the hotel.

FINAL IMPRESSION AND CREDIBILITY
Following a period of turbulence, the Spa management is now working to restore its lustre and it must be admitted that so far they are making good progress. The hotel is undergoing its spring and is especially blowing on the souls of those who want a different experience and a disconnection from the everyday world. With their offer they are trying to move towards above standard to high quality, while taking into account local traditions. The main complaint is related to the offer of the town, which is still not aware what kind of a pearl the Roman Spa is. With a special offer, an exquisite cuisine and its pleasing architecture, the Roman Spa is a competitor to Slovenia’s more experienced thermal providers worthy of serious consideration.