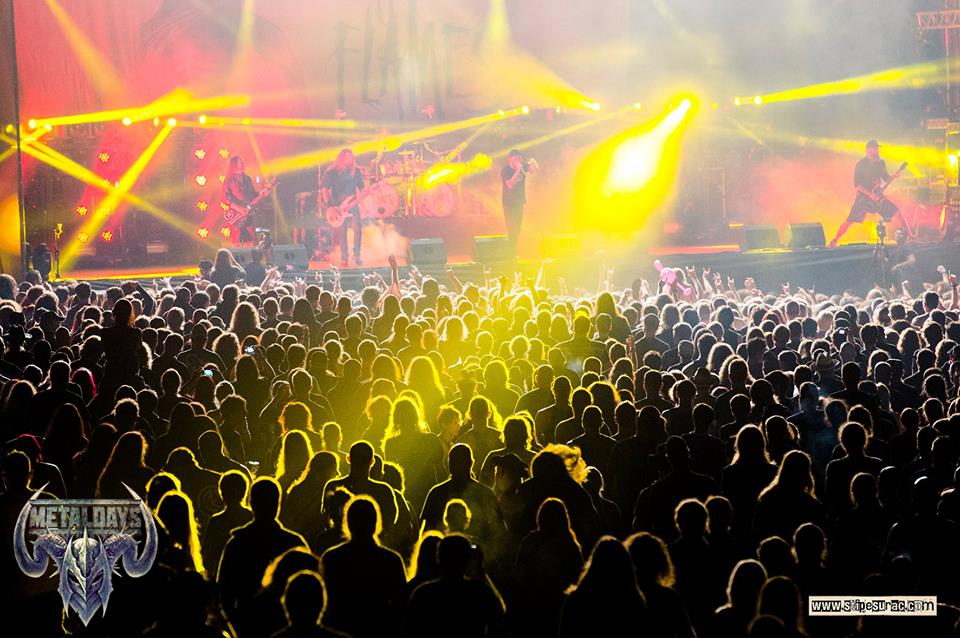 Metal Camp, today Metal Days is a unique phenomenon that was born from the provocation of the domicile Tolmin local metal scene. A paradise for all kinds of metallers from symphonic, thrash, crossover, death to black and progressive metallers. Head-bangers delirium, folks are going crazy, infernal noise, many sacrifice their holiday for the festival and visiting the festival becomes a holiday for the whole family. It seems that metallers are not just about music, it is a way of life.

Looking at the development of the metal scene it was at its inception radically criticised, a marginalised subculture. The whole concept is based on a challenge that has slowly formed into a specific ideology and way of life. Among the rock fans metallers were initially considered rock primitives. With morbid messages, occult and Satanism they were marginalised on the scene.

The essential elements of metal iconography are united in strength, which is expressed through the noise of electric guitars. Head-banger’s power is based on anger, defiance and pain, it excludes sentimental subtlety.

If we are to learn something from the metal scene also in the organisation of events, then we need to understand the three dimensions of the metal provocation:

– Sound: the event must have its own colour of the sound. With metallers it sounds powerful, quick and efficient, often at the limit of the noise, but harmonious. To mainstream consumers this sounds like sawing, tamping peppered with guitar solos.

– Visuals: setting of the stage, light effects and choreography are an extremely important part of any event. Metallers are masters of image. The visual image is an important part of their events. Do you remember the spandex trend that has prevailed in the eighties in the form of elastic tight clothes and tights?

– Content: The name of the event as part of the construction of the image of the event and a unique branding of bands, fans and all around. Fantasy stories drawn from history, mythology and science fiction.

At your events you can play with all three elements and on any or all three together to reach a memorable and above all a positive provocation of the participants.

Any fears of metallers are unnecessary. Stereotypes have long ago been survived. Metal-tribe is based on honesty and mutual respect. Behind the blackness hide gentle souls. This is also confirmed by reports from Tolmin, where residents are praising visitors from all over Europe. The project is also supported by the local politics with the mayor at the helm and all the local tourism industry. Satisfaction is justified, as the festival managed to bring a 12.000 headed tribe to the valley from all over Europe, who on average spent a whole week in Tolmin.

Deeply rooted prejudices can be a major obstacle for the event organisers. If we, as the organisers concentrate, only on the mainstream, we are in great danger of letting out of sight a full range of extravagant subcultures that will eventually one day become the mainstream somewhere.

Personally I am still happy to play the air guitar or an invisible guitar and occasionally I also head-bang, if the opportunity is right …..

Case Study:  NIKE BARBER SHOP
An example of addressing different target groups, but which are also global subcultures is Nike Barber Shop, which took place last year during the European Football Championship. In the heart of Paris they opened a barber salon, where football fans gathered, and barbers arranged their hair in the styles of the famous footballers. The bar was decorated in the style of Nike and included a goods store, space for press conferences and a series of accompanying events. All this was accompanied by a facebook application and excellent marketing results.

There Is No Sustainability Without Persistence