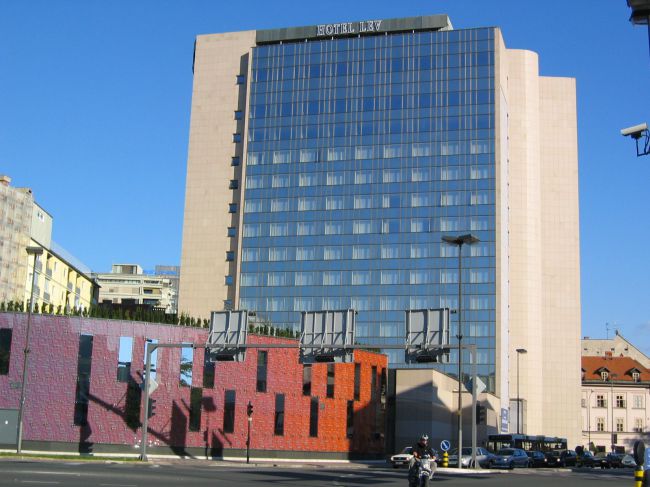 LOCATION
Hotel Lev is in a dominant position at the entrance to the city on the Celovška road. The location in the business centre of Ljubljana and just on the outskirts of the city centre is ideal for accessing the city and all of its top spots on foot. The hotel, which was renovated for the Intercontinental chain that was then followed up with a glass facade and a red glass extension, has for many years been one of the icons of the Ljubljana hotel landscape, since its opening playing host to many famous guests. The hotel is now associated with the recognisable Grand Hotel Union, with which they sit at the top of Ljubljana hotel offer. ACCESSIBILITY
The hotel was built on the site of the former Pri Levu (‘at Lion’s’) inn, after which it took its name. It is situated at one of the city’s most important intersections on the edge of Ljubljana’s inner transport ring. This means very easy transport accessibility and frequent public transport, as it is next to one of the public transport hubs in the city centre. Very close by are also railway and bus stations, in fact everything is very close making all of the key points accessible on foot. For hotel guests or conference participants there is also hotel parking garage available and in addition there are also two large public parking garages available in the local vicinity.

COLD APPETISER – Architecture and aesthetics
Hotel Lev was the first more ambitious post-war hotel building in Ljubljana, built in what was then a modernist style.
The hotel renovation in 1999, for the Intercontinental chain, was not revolutionary, but was in fact very classic and in the manner of the Intercontinental standards. This is not bad, as the design is good, functional and enables the utilisation of space. This approach is continued in the interior, with its simple design, elegant and subdued and with the use of premium materials. Architecturally the most striking aspect is the Lev business centre at the foot of a tall building within a printed glass envelope of the building in which the convention centre is located. After leaving the hotel chain Intercontinental, there now remains a very functional hotel product in Ljubljana.

WARM APPETISER – Personnel and culinary offer
At the Hotel Lev everything is about convenience and usability, which business guests are looking for. To this the most professional and very friendly staff contribute, who build on a personal relationship. The smiling staff are there to help you learn first hand about anything you want to know about the hotel and the destination. Even breakfast is tailored to the needs of business guests and caters to a very wide range of European and American flavours. Pri Levu is a nice restaurant, offering exciting daily menus that attract a wide business audience. The offer is based on fusion cuisine and for Ljubljana the hotel is at the top for its creativity, supplemented by a relatively extensive wine list.

MAIN COURSE – Congress and hotel offer
The hotel rooms are nicely decorated, albeit not amongst the largest or most modern in the city. They are, however, very precisely and carefully maintained and the upper floors offer wonderful views of the city. The convention Centre is a modern designed centre of medium size, complemented by seven smaller conference rooms on the 13th floor. Very positively surprises are with the flexibility and professionalism of the staff that is in all areas the red thread of the hotel. DESSERT – Additional offer
A la carte restaurant ‘Pri Levu’ is one of the best hotel fusion restaurants in Ljubljana with a very creative selection of dishes.

FLOP – NEGATIVE SURPRISES
Smaller lobby than one would expect in a hotel of this category (5 *****). The space is too small, especially when the entire Karantanija hall is being used. OVERALL IMPRESSIONS AND CREDIBILITY
Hotel Lev is somehow reminiscent of car limousines: in our region, despite numerous advantages they are not always the first choice. The situation is completely different in other markets, where limousines dominate among cars as do those with pedigree and genetic blueprint of large hotel chains among hotels. Lev is love at second sight, which never disappoints. After all, not all guests are the same and to some more important than the appearance of the hotel are the well-being, comfort and friendliness of the staff that makes all the difference. After all, this hotel is “good value for money”, which today is also very important to business guests.