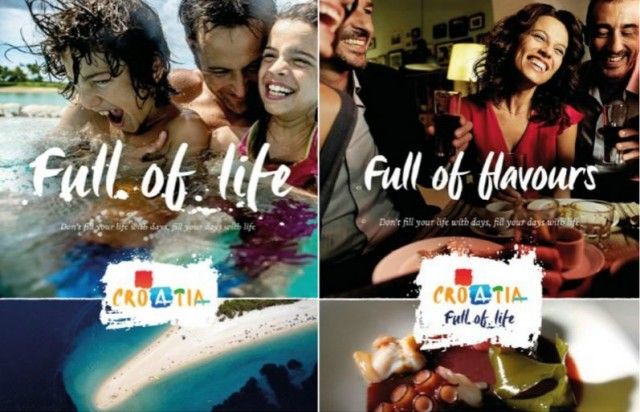 Today, Croatian Minister of Tourism Darko Lorencin and Chief of Croatian Tourist Association Ratomir Ivicic announced the country’s latest slogan. Croatia, Full of Life will be the new tagline used in Croatian tourist promotion, and the leading thought in the new concept of communication with the market, labeled „Big Idea“.

The new slogan is a product of several influential marketing companies, including BBDO from Croatia, AMV BBDO from Great Britain and DEC BBDO form Spain. It was chosen because of its simplicity and flexibility. It is also original and does a good job of presenting Croatia as a tourist destination.[pullquote]Croatia’s previous slogans include “Croatia, Heaven on Earth” , “When Hearts Says Summer, It Says Croatia”, “So Beautiful, So Close” and “When Heart Says Summer, It Says Adriatic” and “Mediterranean As It Once Was”.[/pullquote]

After an international competition to search for its replacement which saw a number of leading advertising agencies submit their proposals, it was decided that ‘Croatia, Full of life’ Around 20 million euros will be spent on re-branding, international PR and strengthening and repositioning Croatia as a tourist destination in 2015 with the new slogan playing a big role.

“We like the uniqueness of the new slogan, because the keyword life does not appear in the taglines of other tourism-oriented countries in the world, and life in Croatia is always perceived as a wonderful experience, so potential tourists will immediately recognize our message,” said Tourism Minister Darko Lorencin, adding the slogan was chosen because of its simplicity and flexibility.