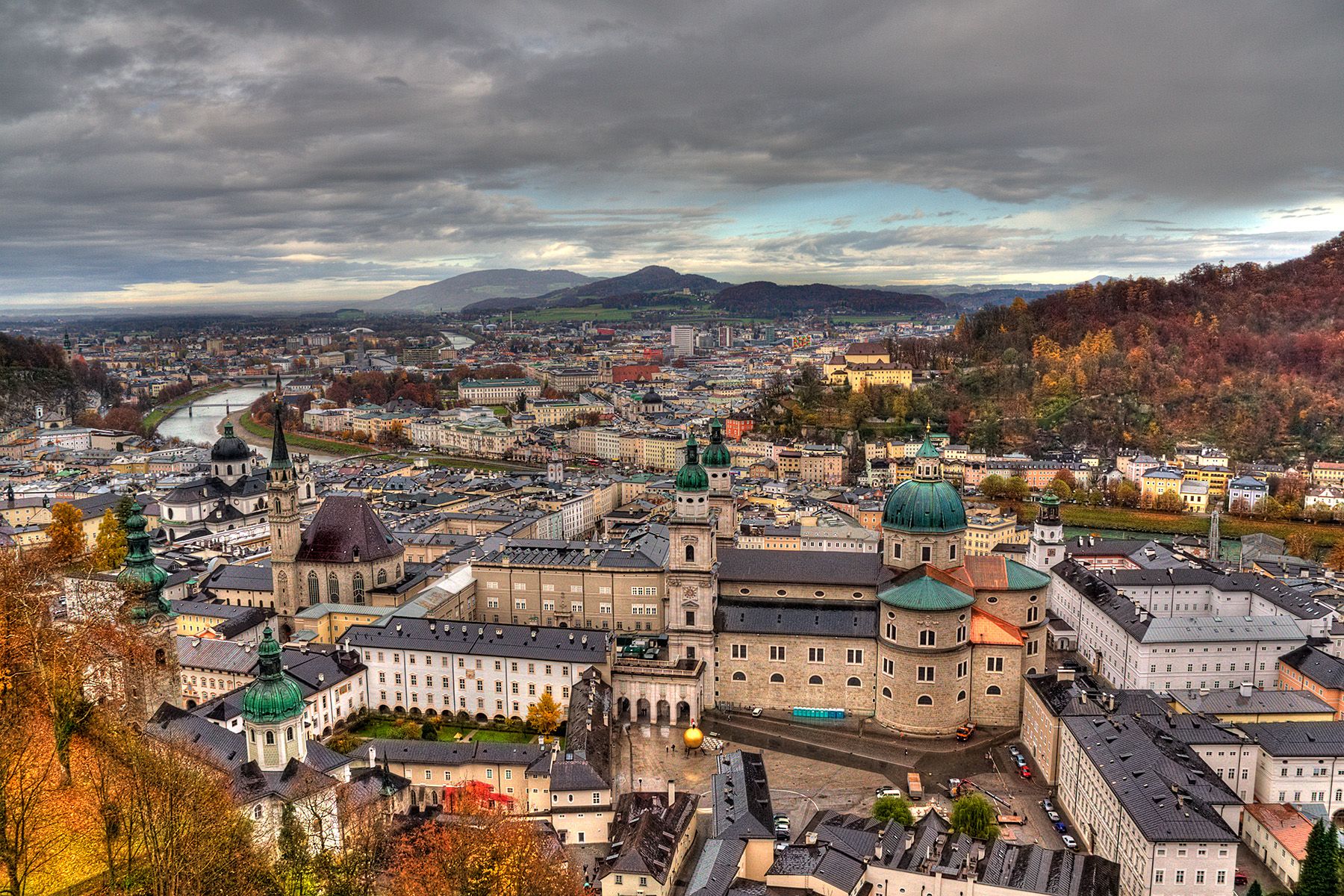 Salzburg – A charming cultural metropolis with worldwide fame
Looking for the perfect destination to go for your next incentive or conference? Well, you have found it in the heart of Europe. Salzburg is the stage of the world and offers great opportunities for professional events and meetings. The ideal setting between Alps and urban city life – the city and province of Salzburg.

The best places to meet, stay and incentivize in Salzburg:

Salzburg Messezentrum – Salzburgarena
Exhibition Center Salzburg is unique due to its geographical location in the heart of Europe and Austria. 10 exhibition halls with an overall exhibition area of 36,625 m2 and the Salzburg Arena with an area of 2,545 m2 attract more than 628,000 visitors annually. Last year 34 million euros were invested in building Hall 10 to provide the space needed for international congresses and trade shows.

Hotel Goldener Hirsch*****
The Hotel Goldener Hirsch offers event planners three event halls with a total area of 135m². This hotel’s first-class location in the heart of Salzburg’s old town makes it easy for conference guests to enjoy their breaks and free time. With so many sights and attractions nearby, it is easy to create the perfect social or incentive programme. The Herbert von Karajan® Salon and the hotel’s library are ideal venues for exclusive meetings.

St Peter Stiftskeller
A long past and a promising present. The St Peter Stiftskeller is a wonderful venue situated at the foot of the Mönchsberg mountain in Salzburg’s old town. It has been a popular meeting point since the year 803. More than 600 people can be seated in this event venue – perfect for larger events. Guests can still dine in this centuries-old venue with dining rooms for 10 to 180 people.

STAY LOCAL
Enter the World of Brewing
Salzburg claims the title of ‘The Austrian Beer Capital’. With a history spanning over more than 500 years, Stiegl plays a significant part in this beer culture given, among other things, the huge variety of beer it offers. Over the years Stiegl has developed from a small local brewery into Austria’s largest and most successful private brewery. Visit the brewery, admire their beer-tasting and maturing cellar, and make the most of a unique opportunity to savour the seasoning and sample some Jungbier (young beer) in the traditional way to assess its progress. It’s a tour you won’t forget…or will you?

HIT THE STREETS
Classical Music capital
Salzburg may be small at first glance, but it’s actually a metropolis of cultural happenings. More than 4,000 events take place in Salzburg. Max Reinhardt, Michael Haydn, Georg Trakl, Thomas Bernhard, Stefan Zweig, Hugo von Hofmannsthal – they all have left their marks on Salzburg. The most impressive track record comes from an artist who has given the city its nickname: Wolfgang Amadeus Mozart. Mozart’s musical heritage lives on in Salzburg. Not only when the Mozart-Week in January is celebrated, but over the entire course of the year his works of musical genius seem to be ubiquitous. And Mozart should certainly be part of your conference’s side event or social programme. Mozart’s ‘Geburtshaus’ has earned its status as one of the most frequently visited sights and places of interest in Austria.

PLAY THE GAME
Spice up your life
Around 20 km away from Salzburg city, deep down underneath the ‘Salzberg’ mountain a secret world awaits your discovery. For many years, only the salt miners in Berchtesgaden were allowed to enter the complex tunnel system of Salt Mine Berchtesgaden. Today, part of the mine – which has been in operation for over 500 years now – is open to all fans of adventure who wish to get to know the place where the famous Bad Reichenhall brand salt originates.

An entertaining evening of “Volksmusik”
An evening programme of events in a traditional country inn or a rustic evening in a mountain lodge where you can try typical Salzburg cuisine accompanied by performers or musicians that provide typical traditional entertainment.

Medieval Festivities in Fortress Hohensalzburg
Food, drink, pleasures and entertainment of the medieval period. It all starts with a welcome drink and leads on to plenty of typical rustic delicacies of the age such as knights’ lard spread, herb curd cheese and crispy bread, cream of potato soup with mushrooms and many more! There are also plenty of old medieval activities, such as firing a crossbow, throwing the horseshoe or a wood tile race.

Alpine Olympics – Rustic and Fun
The perfect combination of activities and culinary treats for an incentive. Try your skills in Alphorn blowing, Masskrugstemmen (beer stein holding competition), Alpine triathlon (made up of sawing, cow milking and an alpine game called “nageln), Crossbow and Needle and thread.

Brandboxx Salzburg
This perfectly equipped event venue has 6,500m² of space for as few as 50 or as many as 3,000 guests. Whether you’re looking for a modern, loft-like event hall or an elegant venue for your next corporate event in Salzburg – this venue’s flexible concept can be customised to create the exact setting you picture for any event.

MUST TASTE – GASTRONOMY
Salzburg Nockerl
Salzburg Nockerl is a sweet soufflé served as a dessert, a culinary speciality of Salzburg. The sweet dumplings are made of egg yolk, flour, sugar, and vanilla, mixed into a thin dough. Then egg white is whisked until it is stiff and mixed carefully with the dough. Afterwards dumplings are formed and baked on low heat in an oven. Salzburger Nockerl are always freshly prepared and served warm with powdered sugar, sometimes with a raspberry sauce.

CARRY ME HOME – GADGETS/GIFTS
Mozartkugeln
Mozartkugeln, originally known as the “Mozartbonbon”, was created by the Salzburg confectioner, Paul Fürst, in 1890 and named after Wolfgang Amadeus Mozart. Produced according to the original recipe and using the original technique since 1890,the round chocolate delight filled with nougat and marzipan is one of the most popular Austrian souvenir.