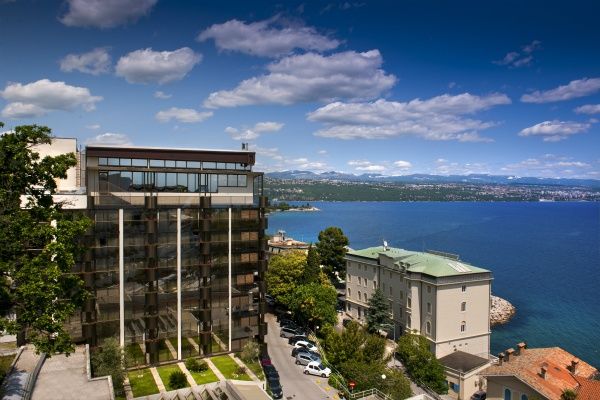 LOCATION The construction of the Adriatic Hotel started in 1968 and was completed in 1971; at the same time the great congress hall was opened. In former Yugoslavia, this was one of the first hotels with congress halls and the hotel team was one of the few which was specialised for providing congress services. The hotel is located in the vicinity of downtown Opatija, 50 meters from the beach with a breathtaking view to the Kvarner Gulf and the island of Cres. This hotel, under the brand name Lifeclass, is managed by the hotel company Istrabenz Tourism; however, according to the latest information the company is planning to sell it this year.

ACCESSIBILITY The hotel is easily accessible and the road signs are well positioned. Road access to Opatija is acceptable, but air access remains one of the biggest challenges for tourism policy planners, despite the relatively close proximity to the airports in Pula and Krk. Tourists generally arrive in Opatija by road. The city is squeezed between the slopes of the Učka mountain range, limiting the amount of space the city enjoys. Parking is therefore a problem, which is partially solved by the hotel car park.

COLD APPETIZER – Architecture and Aesthetics This compact hotel was built in the golden era of Yugoslav hotel modernism. The complex is composed of two buildings, the Adriatic I and the Adriatic II, which have a joint reception. Due to various renovations the hotel remains in good condition, although small wrinkles are beginning to appear in some corners, e.g. the outdated swimming pool area. In addition, colour choices and a few very dark parts of the hotel seem to be from another time (Adriatic II). Furthermore, the interior is reminiscent of old times, as the space design reminds visitors of the last years of the 20th century, and is therefore due to be adapted to modern times.

WARM APPETIZER – Personnel and Cuisine The personnel are professional, but at times not overly friendly or attentive. One must accept the hotel with its positive and negative sides. One of the advantages is certainly the hotel’s culinary delights, especially the breakfast. For catering purposes lunch is offered as well, which undoubtedly exceeds hotels’ traditional board. It must be pointed out that nevertheless most guests are boarders and this comes at a price. Still, the meal which comes with full board is proper and delicious, sometimes even unique. The congress cuisine range is broad enough to satisfy even the most demanding congress guests.

MAIN DISH – The Hotel’s Congress Services Rooms in the Adriatic I hotel are spacious enough, the comfort is acceptable and the interior has been thoroughly renovated. Rooms in the Adriatic II building are older and of a lower category; they show their years. Quite ordinary, no real surplus and from the viewpoint of competitive hotels the interior is overly outdated. The congress centre has a popular amphitheatre congress hall with fixed seating for 550 persons. Due to its acoustics and state of the art equipment it is considered to be one of the best halls in the Adriatic area.

DESSERT – Extras The Tantra Spa with 550 m2 and a breathtaking view over the Kvarner Gulf.

TOP – POSITIVE SURPRISES A timeless design of the congress hall, which is still very fresh and modern.

FINAL IMPRESSION AND CREDIBILITY The hotel was once the epitome of a congress hotel and its philosophy. Despite its years, the Adriatic still delights with some unique solutions and the well-equipped congress area. Compared to the competitors, the hotel lacks some dynamics and details but nevertheless persistently proves that it has mastered the congress scene in exemplary fashion and that in regard of congress events it still is as interesting as at the day it started. This implies that the congress centre is spacious, well-equipped and that the team professionally masters meeting tourism, whereby it justifies a number of renowned references gathered since its establishment in 1971. Cooperation with this hotel is worth considering; however, everything depends on the wishes and expectations of the client.