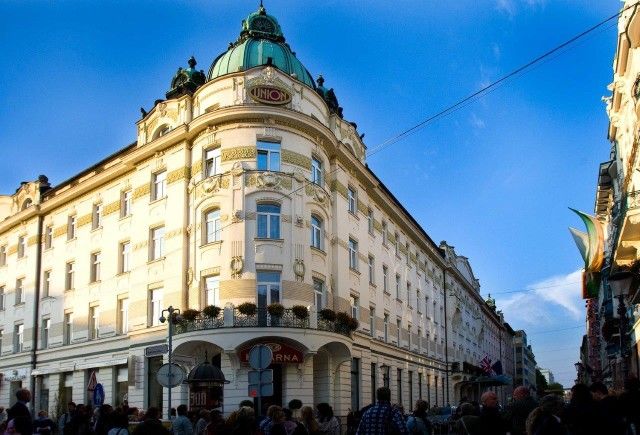 In over a century of existence, the Grand hotel Union has been an important co-creator of the political and social life of the capital and the wider Ljubljana region.

This year, the Grand Hotel Union celebrates its 110th anniversary, having first opened its doors in 1905. Way back then, Ljubljana boasted a total of 9 hotels and was visited by 43,000 foreign visitors. In over a century of existence, the Grand hotel Union has contributed significantly to the political and social life of the capital and the broader Ljubljana region. Over the course of its rich history, the hotel has been witness to many important events and has hosted many famous people – including actor and director Orson Welles in 1979, American president Bill Clinton and his wife Hilary Clinton in 1999, the spiritual leader of Tibet the Dalai Lama in 2002, Queen Elizabeth II and her husband in 2008, King Harald V of Norway and his wife to name but a few.

Over the centuries, the Grand Union Café and Union Hall have also served as the centrepoint of the city’s cultural, political, and social life. Well-known Slovenian intellectuals, artists and traders frequented the café to share ideas. In addition to painters Rihard Jakopič, Matija Jama and Maksim Gaspari, the café was the meeting place for writers such as Ivan Tavčar, Oton Zupančič, Josip Vidmar, and many others. In the period between the two world wars, Union Hall regularly hosted Ljubljana’s elite events, such as the Black-and-White Reduta and dances under the patronage of His Majesty King Alexander. That tradition is still alive today, as the Grand Hotel Union continues to regularly host a wide range of interesting cultural events.[/vc_column_text][/vc_column][/vc_row]