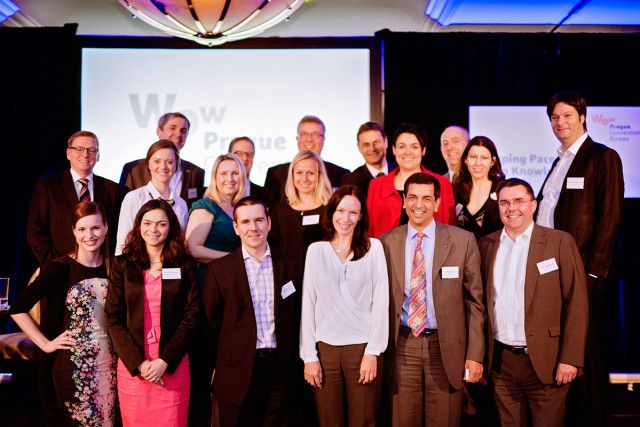 The seminar was attended by more than 120 MICE professionals who heard presentations of seven renowned foreign and Czech speakers. The seminar, which is becoming an annual tradition, was held in Prague for the fourth time. This time it focused on Prague as a host city of the 56th ICCA Congress and the latest trends in the field of congress tourism.

The seminar was opened by prof. MUDr. Jana Hercogová, CSc., former president of the European Academy of Dermatology and Venereology (EADV), who had been awarded for her activities in the organization of international congresses and conferences, and is also one of the patrons of Prague Convention Bureau’s Ambassador Programme. In her presentation she focused primarily on the key factors that determine the selection of the host destination. Based on her long experience in organizing congresses she also defined the main conditions for successful events – most importantly an interesting topic and coordinated organizational team.

Miloš Milovanović from the company Gaining Edge spoke about growing importance of strategic partnerships in the congress industry in response to the changing needs and requirements of clients. Creating strategic alliances is one of the current trends in MICE which is crucial to a destination’s success in today’s highly competitive environment. He stressed, however, that the trend cannot be just blindly followed without knowing in advance what we want and how to achieve it. Successful cooperation that brings the desired results and helps to meet the specified objectives to all interested parties depends especially on the selection of suitable partners.

The former managing director of Prague Convention Bureau Lenka Žlebková presented the case study on Prague’s candidacy for the ICCA Congress in 2017. Prague submitted its candidacy for this congress twice, the second time successfully. She explained the reasons that resulted in Prague Convention Bureau’s decision to prepare a bid for this “Congress of Congresses” in cooperation with local entities and partners from among its members and public institutions, as well as the three pillars on which the presentation of Prague’s successful candidacy depended. She said Prague Convention Bureau’s main motivation was to raise the awareness about the importance of congress tourism and to increase visibility of Prague on the congress market. Prague’s bid was based on three pillars: inspiring topic, lots of networking and fun, and perfect infrastructure.

André Kaldenhoff, Executive Director of the Congress Center Leipzig, shared his experience with organizing the ICCA Congress in 2011. As in case of Prague, the increased visibility and stronger position of Leipzig on the congress map was the main motivation and benefit of the ICCA Congress candidacy and congress organizing. In addition to the benefits for the destination, he also mentioned challenges related to such commitment. The congress was attended by over 1000 delegates from around the world of different nationalities and religions. That resulted among other in the need to comply with many cultural and dietary requirements during the congress. Thorough preparation for an event of such size and significance is crucial for success of the congress.

Rob Davidson from MICE Knowledge, who also moderated the entire event, introduced the second part of the seminar focused on the latest trends in congress industry. He analysed the current economic situation with the growing importance of emerging destinations, especially the developing and Asian countries. In particular, he mentioned trends related to demographic changes and new technologies. He stressed out the growing influence of the generation Y. By 2025 the generation Y will represent 75 % of the world’s workforce, therefore it is necessary to adjust the destination strategies to fit the requirements, expectations, values and interests of this generation in the future.

Pierre Fernandez, Senior Director of European Operations at Meeting Professionals International, introduced results of the latest MPI research on the congress industry and its further development. The results indicated that the industry can expect recovery and increase in inquiries. Analysing the trends in event type revealed a significant growth of educational events presumably due to the companies’ greater investments into the human resources development. By his research he also supported the trends presented by Rob Davidson, especially the trend of using new technologies in event industry. In relation to the technological development he declared that despite the increase of number of hybrid meetings, the live meetings are not at risk of losing the attendees that are willing to travel to the congresses and conferences in person.

The seminar was concluded by presentation of Petr Bříza, a longtime ice hockey professional and the Chairman of the Organizing Committee of the Prague World Cup 2015. The topic of his presentation was Prague as a venue of large sports events and the specifics of their organization. Sports events are very popular and as well as large congress events they attract thousands of participants to the destination. Petr Bříza used the example of upcoming Ice Hockey World Championship in Prague and Ostrava in May to demonstrate the specifics of sports events organization.