Zagreb Be There was voted the best Croatian mobile application at The Communication Days in Rovinj last year. The application was launched in the middle of last year by the Zagreb Tourist Board. It included a new tour, Advent in Zagreb, and was developed by the Bruketa&Žinić OM and Brlog agencies. They won the MIXX Award at the National Festival of Marketing Communications, whose organizers are the Croatian Association for Marketing Communication (HURA) and the Croatian branch of the European Association of Digital and Interactive Marketing (IAB).

The Zagreb Be There mobile application offers five possible routes, each of which presents Zagreb in a different way. One of the routes, “Space Explorer”, features artistic installations by Ivan Kožarić and Davor Preis, representing planets in our solar system. The “Hidden Places” route reveals the last remaining well in the Upper Town, an abandoned cemetery on Jurjevska Street, and the water pump which was painted as part of the “Pimp my Pump” project and dedicated to Dino Dvornik. The “Indie Zagreb” route features the Museum of Broken Relationships, the Museum of Street Art and the memorial plaque for Tomislav Gotovac, Zagreb I Love You, on Ilica. There are two other routes, Refreshing and Classical Zagreb… 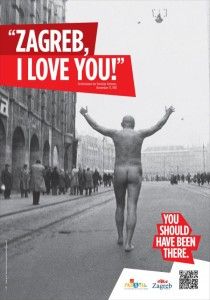 The application works on iPhone and Android systems, and it is based on the so-called gamification principle, which applies video game rules and ways of interaction to the real world. Tourists using the Zagreb Be There application should virtually check-in at each location they get to, and once the route is completed they win awards such as discounts on admission tickets, etc.

The application can be downloaded from the betherezagreb.com micro-page, or via the QR code on flyers that can be found at all major tourist spots around the city.