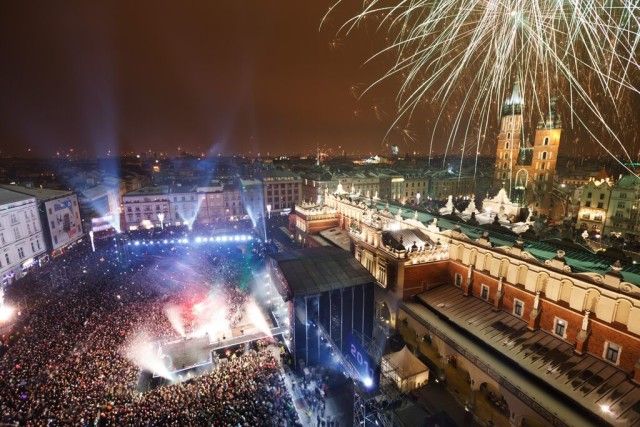 Hotel Copernicus, located in Kanonicza Street at the foot of Wawel Hill, is a real marvel for guests thanks to its fascinating architecture combining the style of the past with exquisite contemporary comfort. The venue is Poland’s only member of the luxury Relais & Chateaux hotel network. Particularly demanding guests can also enjoy locations overlooking the Rynek Główny, for example Hotel Wentzl or the Bonerowski Palace Hotel. The Old Town has also a long been home to old family-owned hotels.

Krakow plays a crucial role on the culinary stage of Poland, where traditional Polish cuisine meets global influences. The 2014 Michelin Guide recommends 41 Polish restaurants, 19 of which are located in Krakow. The list of Kraków’s restaurants recommended by Michelin’s reviewers grows each year (the venues with the highest rating in Kraków, awarded three knives and forks each, are all hotel restaurants: Copernicus, Wentzl and Trzy Rybki at Stary Hotel). As we all know, the way to someone’s heart is through their stomach, and Krakow’s culinary fandom keeps growing. If this is not enough, among the 20 Polish gourmets that are protected by European Union 10 are from Małopolska Region.

Krakow is very well known as a former capital of Poland, city of splendid monuments, churches, museums and galleries. But the city has also other faces – and getting to know them is the aim of our escapade. During our trip we will meet with different mysterious persons from the past – alchemists searching for the philosopher’s stone, astrologers, builders of crooked towers, mummies.

Instead of dessert served standard way in the restaurant we invite you for a chocolate feast – Krakow’s Chocolate Manufacture will open its doors special for you, after hours when nobody is there, we could enter inside. In the cozy interiors you will indulge in the world of aromas and flavors. White, milk or dark, served from the fountains or in tablets, pralines or bars – every chocolate aficionado will find his favourite bite.

The guests will see the most interesting and magic places in Nowa Huta-district with streets slightly different than in the centre of the city, also different buildings, tenements… and this huge factory.. but still we are in Krakow. Once it was supposed to be separate city, nowadays it is a district of Krakow – Nowa Huta. There are things to see, stories to hear… Here you can get better look
at a history…

This is a very interesting activity for people interested in getting to know more about the Polish culture and, of course, its gastronomy.

During workshops, smaller groups of 5 persons each will work on different stations with different topics: painting on glass – on of the most deep rooted tradition; strings of wooden beads that decorated Polish traditional cloths; pottery and painting pottery and to mould a pot in clay and paint floral decoration of ceramic pots; wicker – to weave a basket on wicker, decorating toys – old Polish toy on paper and wooden; paper cut-outs – to cut out the famous linen tablecloth paint decoration.

Rynek Underground
Visitors may not only see, but also touch history from the beginnings of the legendary town. The archaeological park, located 5 meters under the surface of the Main Market Square, presents a unique picture of the Medieval Krakow – huge and vivid. The exhibits on display confirm the continuity of commercial activities which have been taking place here continuously for more than 800 years. This unique scenery can also be used as a venue for a conference with full multimedia service and the possibility of separation from the remaining part of the exhibition.

New Main Building of the Polish Aviation Museum in Krakow
The Polish Aviation Museum in Krakow is one of the oldest permanent airports in Europe. The Museum, founded in 1963, collects and presents items related to the history of aviation technology in Poland and worldwide. The architectural shape of the building is very original – from a bird’s eye view it looks like a rotating propeller. It is a great ‘Gate to the Aviation Theme Park’. For the organisers of formal dinners, banquets, cocktails, concerts and business meetings, the Museum offers spacious premises – the main hangar and a multi-function room, as well as the exposition room in the Main Building.

Juliusz Słowacki Theatre in Krakow
Juliusz Słowacki Theatre is one of the most famous and recognized polish theatres, which has been operating since 1893. It’s building is classified as one of the most precious monuments of theatre architecture in Europe. The interiors are decorated by fresco by a Vienna artist, Anton Tuch, and a famous curtain by Henryk Siemiradzki. Apart from its own artistic activity, the theatre offers its premises for hire. A beautiful, three-level air-conditioned audience and period foyer are a perfect venue for the organisation of business meetings, banquets and ceremonies. The theatre is perceived as a luxurious „Krakow’s salon” and a place of elitist meetings.

Wieliczka Salt Mine Tourist Route
The Wieliczka Salt Mine is the only mining site in the world which has been continuously operating since the Middle Ages and is one of the most famous tourist destinations in Poland. In 1978 it was registered on the I UNESCO List of World Natural and Cultural Heritage. The underground world of the Mine comprises as many as 2391 chambers connected by pavements of a total length of 245 km. The historic salt chambers enjoy huge interest among organisers of all types of events, parties, banquets, concerts and business meetings. The mine is also the owner of the four-star Grand Sal Hotel in Kinga Park, just next to the Daniłowicz Shaft building, which is the entry to the historic underground.

Wierzynek Restaurant
The Wierzynek Restaurant is located in the very heart of Krakow, at the biggest Medieval Market Square in Europe. Its name refers to Mikołaj Wierzynek, a townsman who in 1364 organised
a famous fest for the European rulers. The restaurant comprises nine historic rooms whose interiors offer a perfect background for business and private meetings, irrespective of their size and nature.

TOP 5 THINGS TO DO IN KRAKOW

1. Spend a few hours at The Main Market Square – Huge 10-acre square, the largest among Europe’s medieval cities, features the 16th-century Renaissance Cloth Hall and the splendid 14th-century Gothic Basilica of the Virgin Mary. The all-time centre of Krakow, full of cafes, pubs, clubs and restaurants. A must see in Krakow.

2. Visit The Wawel Hill and the Royal Castle – The steep and lofty limestone hill boasts the most beautiful polish castle. It features magnificent architecture with structures dating back even to late 10th century, a magnificent Cathedral, astonishing renaissance residence part and numerous other attractions among which you can find Leonardo Da Vinci’s Lady With an Ermine guarantee unforgettable experience.

3. Feel the Cultural Life – Krakow, with its royal legacy, is today not only a city of museums and architectural landmarks, but also a vital centre for contemporary art, and a thriving organiser of festival life.
Krakow teems with events. Annually nearly 100 festivals and other events of international renown are held here. The European Capital of Culture 2000, spares no effort – the events covered by the urban 6 senses strategy have built themselves, just in recent years, a global brand Krakow, a city of writers, also has the country’s largest Book Fair, as well as great literary festivals; here there is the sensational recently launched theatrical review of The Divine Comedy, and here, finally the ArtBoom Festival boldly introduces the latest art into the historical fabric of the ancient centre. Off Camera, the Krakow Film Festival and the Film Music Festival attract cinema lovers, who soon return here to shoot their next films.

4. Don’t forget about The Jewish District (Kazimierz)– founded in the 14th century as a separate town, was, by the end of the 18th century, connected to Krakow. At the end of the 15th century, the Jewish quarter was created here, which existed until the Second World War II, when the Nazis crowded the entire Jewish population of Krakow into the ghetto located on the other side of the Vistula River in Podgórze. The pacification campaign carried out in the ghetto in 1943 sealed the tragic fate of Krakow’s Jewish community. Today, the former inhabitants of the area surrounding Szeroka Street are recalled by the preserved synagogues and the restored Remuh cemetery. Kazimierz – a favourite place of artists, full of studios and art galleries – is today one of Krakow’s biggest tourist attractions. The magic of the old Jewish town can still be felt here, and the unique conglomeration of the district consists of many contrasts: There are churches and synagogues here, Hasidim and clubbers, solemn celebrations and the weekend bazaar in Nowy Square. in 2010, opened in Podgórze the branch of the Historical Museum of Krakow besieged by visitors – the former Oskar Schindler Enamel Factory and nearby, also including the use of post-industrial buildings, the modern building of the Museum of Contemporary Art (MOCAK) was created.

LET’S SEE THE MINERS WORKS
During the visit the guests will have an occasion to personally experience see how miners were working excavating salt. Passing through the corridors and entering chambers group will try to transport salt, build wooden constructions supporting the walls and ceilings of the chambers, remove salty water endangering the existence of the mine. On the way guests will have unique occasion to go off the tourists’ route – they will explore part of the mine normally non accessible for regular visitors. Participants will receive lamps and overalls and follow the experienced guide into the mine’s darkness. Route, leading through excavated in 19th century chambers and corridors nowadays out of use, demands more effort but rewards with feeling of speleological exploration unknown to most of the visitors.