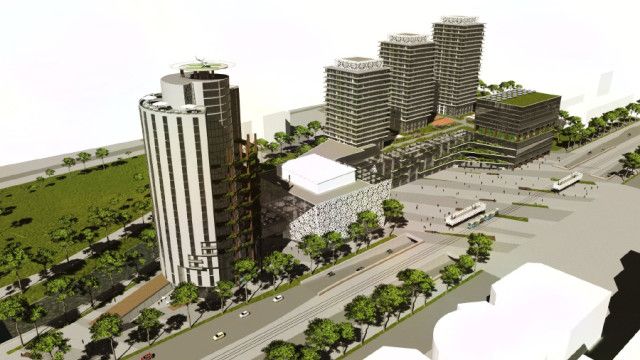 [pullquote]The Congress Centre Sarajevo will complete the offer of the capital of Bosnia and Herzegovina and will in the future certainly become one of the key reasons to come to this town[/pullquote]Congress Centre Sarajevo preparations began at the end of 2012 and now, after making a decision to start the preparation of an urban project and after a public hearing, the final version of the project has recently been adopted.

Q: Why Sarajevo?
This city is part of the world’s cultural and historical heritage, set in the heart of Europe and a meeting place of diversity. The Orient and Occident were literally found in Sarajevo and have offered a new value to this city – beauty in diversity. That is why Sarajevo is interesting and special.

Q: We now find out that Sarajevo will get a new Congress Centre – why did you decide on that kind of investment?
As Sarajevo currently doesn’t have a convention centre and we are witnessing the expansion of congress tourism around the world, we had the idea that in the centre of the Novi Grad Sarajevowe Municipality we would move towards the implementation of a facility for that purpose. Our wish is that the construction of the Congress Centre Sarajevo will put Sarajevo on the map of conference cities of Europe and the world. In countries where congress tourism is popular, the multiple economic effects are already visible and with such a convention centre Sarajevo will become a serious competitor on this market.

Q: Do you think that with the new centre Sarajevo will reach the level of other European capitals?
It is certain that the not just the development itself, but also the content and quality of the Congress Centre Sarajevo will attract the attention of those who are in constant demand for such facilities, and they will choose to organise their congresses, conferences, and similar events right in the capital of Bosnia and Herzegovina.
Sarajevo has always been known as a tourist destination and in the few last years there has been an evident increase of tourists from around the world. Only last year, according to the tourists themselves, Sarajevo was repeatedly highlighted as a mandatory stop for a visit. Following an article in the Huffington Post Sarajevo was also on the list of 10 most beautiful cities in the world, and it was published on the portal Buzfeed.com on the list of 53 world cities that must be visited. Alongside Dublin, New York, Istanbul and other world famous capitals Sarajevo was also placed.

Q: Why is this project the most significant of the “Pokrenimo Novi Grad zajedno” programme?
It is true that this project is one of the main projects of the „Pokrenimo Novi Grad zajedno“ programme for which, together with the Municipal administration, we have been actively working to implement for the last four year. The financial value of this project itself, for which the estimated value is around 300 million KM, places it among the most important projects of the aforementioned programme. The project is clearly of great importance to our local community, but also for Sarajevo in general, as Sarajevo now has high-quality conditions for all forms of tourism other than for congress tourism.

Q: Will the new Congress Centre be intended only for Congress use?
Beside its congress focus, extra facilities are also planned. Bearing in mind that only holistic and multi-functional projects have a chance in today’s competitive market, alongside the congress component where it will be possible to maintain the central business and educational, cultural and other events, it is also planned to construct hotels with envious levels of accommodation capacities, a shopping centre, underground parking, additional business facilities, as well as the construction of an element of housing. Furthermore, after the traffic will be dropped one level below ground (allowed for in the existing projects), conditions will be met for the arrangement of an attractive central square in our Municipality.

Q: How popular will Sarajevo be as a destination for events and what are Sarajevo’s strengths as a future meetings destination?
Sarajevo is interesting for several reasons. First of all, it has a very favourable geographical position, located in the heart of Southeastern Europe and well connected with the whole region. Just 15 minutes from where Congress Centre Sarajevo will be located is Sarajevo Airport and every other part of Sarajevo is easily accessible by public transport, taxi or even walking. The advantage of Sarajevo as a destination for holding business meetings is that it will be a completely new destination. The tourist movement across the world shows the need for new destinations, and Sarajevo will be on tourist map of the world as a new destination for this type of tourism. Another very important reason that Sarajevo will surely be an attractive destination is the excellent price-quality ratio that visitors will get for their money.

Q: What will set Bosnia and Herzegovina apart and make it attractive to the meetings market?
In addition to its core business aspect congress tourism has also an unavoidable element of tours, dinners, shopping, recreation, etc. With the high quality offer of Congress Centre Sarajevo and the excellent service which will be insisted upon, I am sure that given the richness and diversity of the overall content on offer, with well-organised visits to natural and cultural attractions, BiH will quite quickly become a regular destination for many visitors. Here we offer untouched nature, ancient cities, friendly people, a rich history, a unique cultural mix, Bosnian cuisine with dishes that leave no one indifferent, healthy and organic food and, what is very important, good prices compared to other world capitals.

Q: Which markets and countries are you targeting with your investment?
We do not have specific countries that we are targeting with this investment. What is important is that this idea comes alive. From the tourist community of the Sarajevo Canton, we were informed that an interest exists, but often for significant and major queries they do not have the opportunity to offer what is being required of them. It is known that visitors as part of the congress type of tourism are significantly bigger consumers than the average tourist, but during the construction and renovation of hotel facilities in Sarajevo little care was given to this type of guest. The halls which existing hotels have generally correspond to the organisation of seminars and other small gatherings. We hope that with the construction of the Congress Centre Sarajevo we will change this, and that we will be able to respond to these kind of requirements also.

Q: What are you predictions for the future?
Future Congress Centre Sarajevo will certainly make Sarajevo not only more beautiful, but will also change the perception of our capital for everyone who lives here and who visits Sarajevo. The new content and the new value that the Congress Centre will bring will classify Sarajevo among the few European capitals that beyond just large and significant events can also offer value in its rich and interesting cultural heritage, historical monuments, the Olympic Mountains and a whole range of continental and Mediterranean tourism that are very close to Sarajevo. After the construction of the Congress Centre in Municipality Novi Grad Sarajevo, I am convinced that nothing in this Bosnia and Herzegovinan city will be as it was before. These investments enrich and change the character and vision of the development of cities. I’m glad to be part of this project.