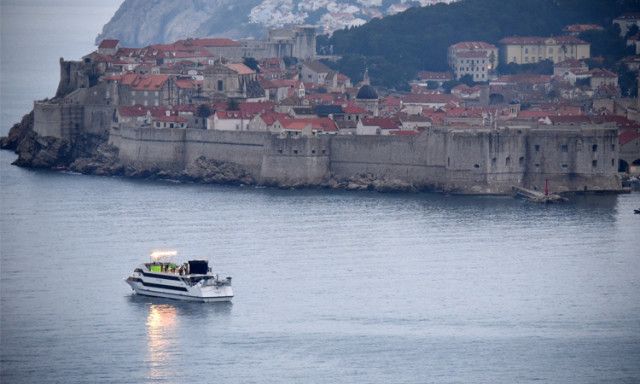 The excitement in the city of Dubrovnik is growing day by day, as the shooting of the Star Wars: Episode Eight is going full blast.

In February the Kongres Magazine already published this breaking news on Dubrovnik hosting the Lucasfilm production, which chose the city as the perfect location for the galactic-like scenery film shots. The filming days have already started on the 9th March and are due to end on 16th of March 2016.

Numerous media reports on the Star Wars on-going filming locations have already disclosed pictures from different movie sets in Dubrovnik, namely the incredible shots of Dubrovnik’s Main Street Stradun, interior pictures of Rector’s Palace and the city’s lovely Onofrio fountain, but a few days ago another filming location was revealed – the Adriatic sea.

The ship of a total length of 45.25 m and width of 10.5 m can accommodate up to 400 persons and has a large sun deck that extends to more than 150 m² which served for the production crew as the perfect podium for making wide screenshots. The crew took the vessel all the way from Dubrovnik’s old harbour and sailed towards the city walls where they spent the entire afternoon circling around and gathering the right footages of the city’s majestic protection walls, that were also illuminated several times during the filming.

The ship was of course escorted by maritime police as well as a team of divers, so that nothing could interrupt the creating of this latest episode of the epic American space saga that has been stirring our imagination for the past 40 years.