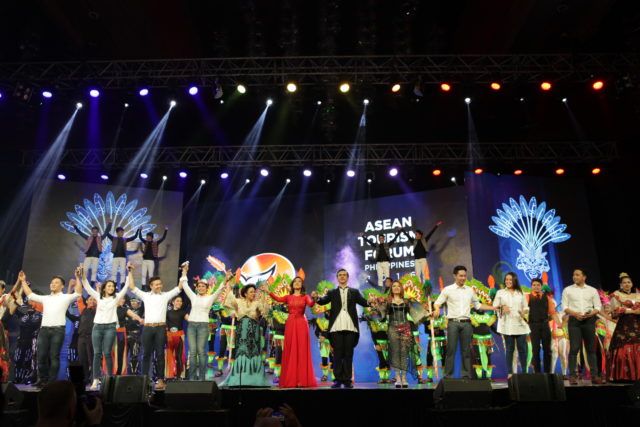 Bringing together the ten nations who make up the ASEAN region – Brunei Darussalam, Cambodia, Indonesia, Lao PDR, Malaysia, Myanmar, Philippines, Singapore, Thailand and Vietnam – may be something of a logistical minefield, but it is one that bears ripe fruit in terms of helping not only strongly promote the best of the region, but also to accelerate strategic decisions that can boost its competitiveness on the world stage in how it can attract visitors and events.

[pullquote]Over its three days the show floor was abuzz with 2,620 delegates, including more than 1,000 ASEAN exhibitors, 457 international buyers and 175 international media. Being at home, the Philippines made up the lion’s share of the ASEAN booths and marked their largest participation in the history of the event.[/pullquote]

In ensuring that this takes place in both the planning and execution of the Forum, its most notable aspect is the high level of political commitment afforded to it, with each of the member states sending a prominent political envoy to attend. This dedication to promoting the region had a profile opening, with the gala night opening speech delivered by no less than the Philippine President, H.E. Benigno Simeon Aquino III, after which the 35th iteration of ATF quickly moved through its business gears – after some wonderful gala night festivities, of course.

Beyond the show floor there was also much buzzing going on around the impressive arena for the event, the SMX Convention Centre Manila, with each of the ASEAN nations giving media briefings and ministerial, NTO and other meetings all taking place on the fringes.

For the media briefings, each country was keen to set out their growth targets and forward strategies for achieving them, with Indonesia even honouring media delegates by presenting Arief Yahya, the Minister of Tourism of the Republic of Indonesia, to present their briefing!

Given that each country of the ASEAN region was exhibiting itself distinctly, however, and that they are indeed distinct destinations, one might lose sight of the regional focus, or as ATF 2016 Philippine Host Committee chairman and DOT Tourism Development Undersecretary Benito C. Bengzon Jr. said, “promoting all ten members of the ASEAN region as one destination might seem ‘undoable’ because of the region’s archipelagic nature.”

“However, getting the industry to package tours covering three or more countries and involving land, sea and air transport could be the most exciting and attractive value proposition a tourist could get,” he added, keen to highlight the success of the ATF’s intra-travel campaign under the ASEAN Tourism Strategic Plan 2011-2015.

With this in mind, it was timely that this year saw the release of the region’s latest strategic vision, the ASEAN Tourism Strategic Plan 2016-2025, setting out the two major strategic directions for the coming decade and the strategic actions and activities for how they will be delivered. The plan is something of a benchmark for how other regions can better coordinate their own activities and reap full dividend from a healthy co-opetitive approach.

In making the plan a reality and getting the region out to the world, many of the key goals begin right at home, with Mr. Zulzalani Osman, Acting Head of Marketing and Promotion Centre from the Ministry of Primary Resources and Tourism of Brunei Darussalam noting that “although many ASEAN people are quite familiar with their neighbouring countries, there are still plenty of unique tourism attractions in each ASEAN member state yet to be visited and experienced. We’d like the people of ASEAN to be fully aware, appreciative and proud of the great diversity of tourism assets in the ASEAN member states.”

This support from home is bolstered by each of the ASEAN member states taking on a key focus in the growth of the region: Brunei Darussalam promotes community-based tourism, Cambodia and Myanmar promote ASEAN culture and heritage tourism, Indonesia endorses ASEAN spa and wellness, Lao PDR advocates nature-based tourism, Singapore promotes cruise tourism, Vietnam river-based tourism, Malaysia adventure travel and Thailand experiential and creative travel, all with an eye of regional promotion.

As with the many initiatives and aspirations of the ASEAN region, ATF has become a benchmark event for how regions can elevate their standing on the global stage and attract more visitors and events to visit a recognised ‘region’. The strategic plan and unwavering political commitment to its success guarantee that the ASEAN region is set to go from strength to strength.

‘More Fun in the Philippines’

With this year’s ATF being hosted in Manila, it was a guarantee that alongside the core business and political matters there would be a lot of fun – as per their marketing slogan – and the host nation didn’t disappoint.

Manila itself is another sprawling Asian megacity, one considered by many leading economists as “the next big thing” in Asia in a country for which the economic fortunes are projected to grow notably in the coming decades. For now, however, Manila is having to carefully manage its development – with cranes peppering the city, traffic gridlocked and poverty visible around the city, there are many challenges that the city faces as it pushes forward into the twenty-first century.

What is common to all of the Philippinos, though, is the desire to enjoy life to the full and to have fun, which permeated all of the social activities and the post-show tour. The pre-show tour was the chance to see a little of the city’s historic side, with a tour of Intramuros, the walled enclave of old Manila carrying its history of Spanish, British and American rule, as well as Japanese invasion. It wasn’t long before things got into party mode, though, and the TTG late night function after the gala night at the Chaos: City of Dreams venue ensured that delegates could flex their dancing shoes early on. The Singapore Tourism Board-hosted cocktail event the following evening was the chance to digest the information load of the day and make some new connections, before the farewell party on the event’s last night at One Esplanade (Mall of Asia Complex), a lovely waterside venue, sent everyone off for their post show tours.

This was where the chance for the host country to showcase itself kicked into full swing, with an unprecedented ten (yes, really!) options for post-show tours available to delegates. Each of the options captured a different slice of the Philippine islands and lifestyle, and none would disappoint the delegates, including your correspondent who was fortunate to be invited to Palawan, an island to the west of the Philippine archipelago and quickly gaining recognition as one of the world’s top destinations.

“The tours showcase the efforts of the local government units in preserving, developing and promoting their respective tourism assets the way every ASEAN-member country and its component communities should,” said Benito C. Bengzon Jr. “In effect, we are sharing our best tourism practices in ASEAN with the rest of the world.”

[pullquote]“The tours and the many other componet parts of ATF 2016 are similarly diverse, but are made possible by a common factor – government and industry cooperation – the same element that will make the ASEAN tourism integration a success,” said Bengzon.[/pullquote]

Over the four days, groups had the opportunity to experience some of the most wonderful incentive-style activities on offer anywhere, from snorkelling to crocodile farms, heritage trail visits, wellness, open-air dining and much more, and all in the company of the extremely friendly Philippino hosts.

This would seem to be the case. ATF 2016 highlighted a number of things: that the Philippines is a truly welcoming destination and a fine host for a regional event, that the ASEAN region is on a sold trajectory for growth and that other regions around the world can learn from the initiatives and efforts taking place in the ASEAN region and from the ATF project. Next year ATF will take place in Singapore and it will be enlightening to learn how the strategic plan has helped take this dynamic region forward.