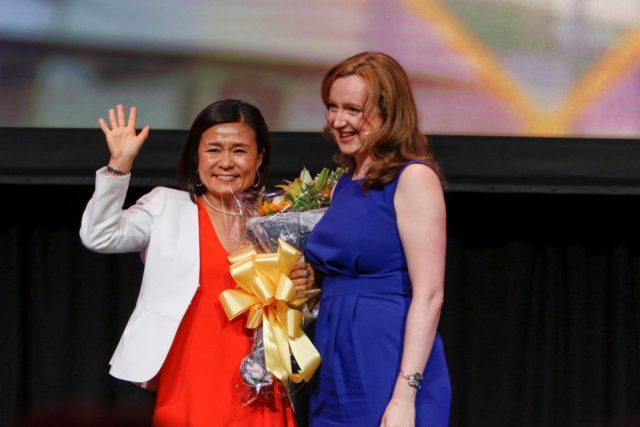 Meeting Professionals International (MPI) is proud to announce the recipients of this year’s RISE (Recognizing Industry Success and Excellence) Awards. The recipients were selected for exceptional achievements in the meeting and event industry and honored today at the annual MPI RISE Awards Presentation and Luncheon during the association’s 2016 World Education Congress (WEC) in Atlantic City.

This year’s RISE Awards feature seven awards in three categories: individual achievement, community achievement and organizational achievement. Recipients are recognized for innovation, global transferability, impact and influence within the industry, and will join the MPI Community of Honorees, a group composed of past MPI award winners and distinguished leaders.

“Congratulations to the 2016 RISE Awards recipients,” said Paul Van Deventer, president and CEO of MPI. “We salute each of these leaders who were nominated by their peers for outstanding contributions and performance. Their achievements will be recognized within our global community for years to come.”

The RISE Award for Young Professional was presented to Lydia Blanchard of the MPI Ottawa Chapter. As a past volunteer for the chapter’s Community Outreach Committee, Blanchard helped raise more than $90,000 towards the Ottawa Network for Education School Breakfast Program as part of the annual charity auction dinner. She also developed a sport tourism events partnership for the region in order to create unity among key stakeholders so that the city could bid on large tournaments and events. Blanchard is a business development sales manager for NAV Centre and currently serves as the director of publications for the chapter.

The RISE Award for Meeting Industry Leadership was presented to Kevin Iwamoto, GLP, GTP of the MPI Northern California Chapter. Iwamoto is considered one of the original founders of Strategic Meetings Management (SMM), is acknowledged globally as a leading subject matter expert in the discipline, and continues to work with key influencers across industries to raise awareness of SMM benefits. He currently serves on the MPI Foundation US Council and is a senior consultant with GoldSpring Consulting LLC. Prior to this role, Iwamoto served as vice president of industry strategy at Lanyon, where he guided the company’s strategy for engaging with buyers, associations and suppliers.

The RISE Award for Member of the Year was presented to Carol Norfleet, MBA, CMP, DMCP, of the MPI Tennessee Chapter. Norfleet has consistently given back to the profession through multiple leadership roles and continued involvement with the Certified Meeting Professional (CMP) program. She has mentored many of the chapter’s past volunteer leadership and created their first five-year-plan, helping establish a long-term vision and strategy. Norfleet is the executive vice president and COO of Destination Nashville, and has served as co-presenter for the CMP Boot Camp/Master Class at WEC since 2004.

The RISE Award for Educational Programming was presented to both the MPI Minnesota and MPI Tennessee Chapters for the advancement in education and professional development of its members through innovative programming with their respective hybrid meeting and road trip initiatives.

In September 2015, the MPI Minnesota Chapter began implementing MPILive! hybrid meetings in conjunction with monthly educational programs. This initiative has allowed them to broaden their reach to members who live outside of the metropolitan area and also to those who are not able to attend in-person.

The MPI Tennessee Chapter Past Presidents’ Road Trip incorporated a new meeting style called Pecha Kucha, where educational presentations are given in just under seven minutes and limited to 20 slides. The program involved traveling across the state to three cities in three days and resulted in the chapter growing their membership by 27 percent.

The RISE Award for Marketplace Excellence was presented to the MPI Belgium Chapter for providing exceptional business exchanges for its members. The chapter approached its annual BE Conference differently, including sponsors and partners in the planning process and during the event. Their new approach helped elevate the connection between attendees and their partners and created business opportunities between their members. Since the successful conference, MPI Belgium has also seen growth in its chapter involvement from its members.

The RISE Award for Membership Achievement was presented to the MPI Arizona Sunbelt Chapter for outstanding membership growth, engagement and retention. The chapter held a volunteer-a-thon from June to August 2015 with the goal of influencing 50 members to join a volunteer committee. They also set out to educate membership on the various networking, educational and volunteer opportunities available. At the program’s conclusion, 34 members signed up to serve on 12 committees, and by October 2015, the chapter’s volunteerism rate grew to 31 percent and is expected to continue to increase.

The RISE Award for Meetings Impact was presented to Ricoh USA, Inc. for its achievement through the strategic use of meetings and events. By holding their annual Ricoh Services Leadership Symposium in smaller sessions within seven regions, they created the opportunity for more local leaders to attend and interact with their counterparts. This approach also provided a more effective way to deliver content, gain consensus and momentum, and make adjustments as needed to customize each regional event.

“The MPI RISE Awards highlight the exceptional talent we have in our beloved industry on a worldwide scale. This year’s recipients have all demonstrated that with hard work and dedication we can achieve success whether as an individual or team,” said Daniela Caputo, Chair of the RISE Awards Judging Panel.

For more details on the MPI RISE Awards and this year’s recipients, visit www.mpiweb.org/RISE.