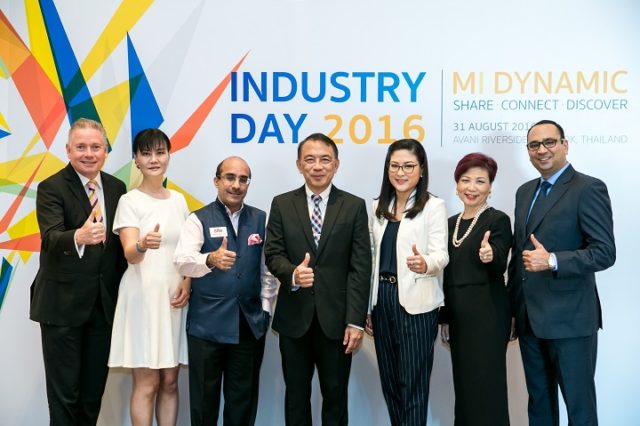 [pullquote]As a testament, the International Congress and Convention Association (ICCA) reported that Thailand’s world ranking improved from 33rd place in 2014 to 27th place in 2015 in the number of international meetings held – increased from 118 events in 2014 to 151 events in 2015[/pullquote]Thailand Convention & Exhibition Bureau has taken another step forward in strengthening Thailand’s leadership position as a hub for unique business events in Asia by introducing Chiang Rai – the northernmost province of Thailand that is complete with potential and readiness in facilitating business events.

To pave the way for endless innovative experiences for business events travellers to Thailand, the TCEB International Media Familiarisation Trip 2016 has been organised to showcase modern facilities and time-honoured heritage of Bangkok and Chiang Rai.

For the ICCA Asia-Pacific ranking, Thailand is in 6th place, behind Japan, China, Korea, Australia and Singapore. In addition, Bangkok¹s world ranking jumped from 29th place in 2014 to 16th place in 2015 with the number of international meetings increased from 73 in 2014 to 103 meetings in 2015. When compared with other Asia-Pacific cities, Bangkok ranks 4th, behind Singapore, Seoul and Hong Kong.

Mr Weerasak Kowsurat, Chairman of the Board of TCEB disclosed that, “The ongoing success of the Thai business events industry demonstrates our strategy to encourage public, private, people, and communities to work hand in hand to harness the power of cultural capital and local wisdom, building sustainable economic growth and generating income for local communities. This is in line with the government¹s policy, which requires us to work with our strategic partners to achieve one common goal ­ making Thailand a premier global business events destination.”

In this honour, TCEB has laid out strategy to showcase emerging destinations throughout Thailand that can offer unique experiences for business events, while continue to highlight Bangkok as a premier destination at the heart of the fast-growing ASEAN region.

During TCEB International Media Familiarisation Trip 2016, delegates will have the chance to learn more of the exciting new and upcoming developments in Bangkok s such as sky train routes and much more.

To showcase Thailand’s emerging business events destination, Chiang Rai has been chosen to be featured prominently in TCEB International Media Familiarisation Trip 2016. This Thailand¹s northernmost province is strategically located in the Golden Triangle area which enables business events travellers to conveniently connect to the neighbouring countries of Laos, Myanmar and China. Boasting a laid-back atmosphere and a blend of cultures, Chiang Rai is complete with facilities that can serve the sophisticated needs of international business events travellers.

In addition, TCEB International Media Familiarisation Trip 2016 will showcase some of Thailand’s endless innovative experiences for business events travellers. TCEB has worked with partners to identify these experiences based on the kingdom’s distinctive characters which include Fascinating History and Culture; Outdoor Adventures; Team Building; CSR and Green Meetings; Beach Bliss; Lavish Luxury and Culinary Journeys.

Also underlining TCEB’s strategy to ensure Thailand’s leadership position as a destination, the bureau is offering business visitors the Thailand CONNECT Welcome Package until December 2016. This global support is specially designed to provide business travellers with the essentials to ‘connect’ businesses in Thailand under the country’s three fundamental pillars for the MICE industry, namely destination, business, and people.

Looking ahead, TCEB forecasts that the marketing initiatives will enable it achieve a five per cent increase in visitors over 2015, welcoming more than one million business travellers and earning the Thai economy a total of 92,000 million baht (approximately US$2.5 billion in the fiscal year 2016).