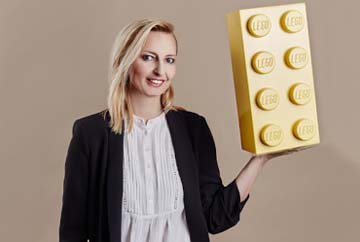 Andrea Faflíková, the first woman president of EuBea Jury, will lead a panel composed by representatives of big corporations with international responsibilities and by members of European national event agencies’ associations.

The Jury will establish the winners of the 12th edition of the European Best Event Awards and of the first edition of Bea World, a new global competition launched by ADC Group. The Jury will gather in Porto, where the EuBea Festival will be hosted next November 15-18, 2017.

Faflíková is currently in charge of setting PR & event strategies in Central Europe, the Middle East and Africa (CEEMEA) for The LEGO Group, where she entered in 2014. She started her career in 2000 when she joined Euro RSCG/Havas, at the Prague offices of the international communication agency. Within a few years, she progressed to the role of heading the agency’s Corporate Communications unit. After almost a decade working in advertising, she joined a newly formed team within the Czech Football Association, and worked as managing director of the Czech FA’s business unit, established to support and promote Czech youth football. During this time, she represented the Czech FA at Uefa seminars and presented Czech football projects on a European platform. Furthermore, she graduated in Football Management at the University of Lausanne, a special programme developed by Uefa. Last year, Andrea was one of EuBea 2016 Jury Vice Presidents.

The European Best Event Awards and the new Bea World competition will be celebrated within EuBea – The International Festival of Live Events and Communication. The event, launched by ADC Group, will be held this year with the support of Tourism of Portugal and the Association of Oporto Tourism, and the precious collaboration of APECATE, the association that gathers and represents the Portuguese companies of Congresses, Events and Tourist Animation.

Bea World is the big news and the big challenge this year. With this new and unprecedented award dedicated to the global event industry, ADC Group is making a big step forward, which broadens the horizons of the initiative. Bea World will be open to event industry entities based all over the world, including agencies, corporations, public bodies, associations, non-governmental and non-profit organizations, locations, etc.

Andrea Faflíková will also be present in Rimini, where the EuBea Advisory Board will convene between March 16th and 18th. The Advisory Board Meeting is the annual appointment that brings together the most influential representatives of the international event industry with the aim to discuss the guidelines of the Festival, propose topics and speakers, examine the Jury process and propose, in general, ideas, and stimuli.