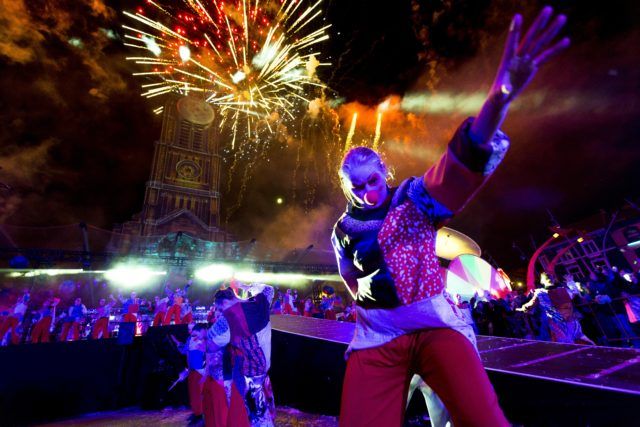 La Louvière is an industrial city in Belgium. Three decades ago it was one of the country’s most successful places because of its coalmines. After years of prosperity, however, the mines began to close down, but the city wanted to find a way to move forward and make the people happy to keep living there.

The authorities therefore decided to contact one of the best-known show directors in the world, Franco Dragone, to make a popular free show for all of the townsfolk. He jumped at the project and with the valuable assistance of Luc Petit, who is now responsible for the artistic direction, created an urban opera called “Décrocher la Lune”. Importantly, the idea here was to include citizens in the show whilst not making it a one-off event.

Every three years, a “Décrocher la Lune” takes place in the town centre of La Louvière. Many of the townsfolk take part in a lot of different workshops and meet professional artists. And finally, during a night in September, the city becomes the most joyful place on earth. In terms of stats, this event is particularly huge: 35,000 spectators and many thousands more of television viewers, 200 technicians, 650 volunteers, 8 workshops, a one kilometre stage and the full mobilization of citizens.

Q: To refresh our readers’ memory and enlighten those who mightn’t yet know of you, what does the Luc Petit Creation agency do?

The Luc Petit CREATION group is able to offer its clients both the design and the implementation of tailor-made shows and events, such as creations of general public or company shows, product launches, inaugurations, parades, heritage-oriented and street operas, fashion shows…

Thanks to a truly cinematographic approach, each piece of entertainment that it designs is an original creation intended to leave the public with a strong image, illustrating the values or themes that are dear to the client’s heart. Having a platform of exceptional acts and performers, Luc Petit CREATION produces events that are presented all over the world.

Q: In your opinion what is the best creative event brought together by your agency?

For us, the best event that we made is “Décrocher la Lune VI” in 2015 and for which we received 4 awards at the EUBEA Festival 2016. After years, this show remains and becomes a key element in the cultural landscape of the region. Each edition moves forward in the creation process, but also in citizen mobilizations. Every three years, the challenges are bigger and the people are there to take them up. Each “Décrocher la Lune” succeeds his gamble: making a show with people, for people and helping them to have a better image of their own city.

Q: From a creative point of view what was the real specialty of the event?

It’s a 3-year creation process that includes all of the citizens, professional artists and crew…over three years a great piece of social work has been made with all of its associated life. This edition was also especially taking care of the European feeling, with a direct collaboration with seven foreign cities that had made giant puppets for acting in the show. All of those citizens have been coached and helped in their tasks by professional artists.

Q: What were the project’s major challenges and obstacles?

As everybody may already know the main crux of that matter is always the budget, but in the Décrocher la Lune show this budget becomes a real challenge for everybody who’s jumping into the project and those types of limits can become a new impulse in the creation process. The challenge is also to match citizens, professional artists and crewmembers to make 800 costumes in a couple of weeks and ultimately delight 35,000 people. The challenge in this project remains huge, but gives hope.

Q: How important is the design of each event and how do we measure a good event design? What are the key criteria for this?

Nowadays, the design of an event is a key element in the creative process. Every client wants to have visuals, inspiration mood boards, 3-D renderings to understand clearly what they really want… The most important thing for us is to always keep humans central to the process, because it’s one of the few factors that can make the difference. Nothing can replace a clown in an audience, for example. So, in a world full of new technologies and multimedia communications, bringing the human to shows still remains our mission – people need to be surprised, and that’s the main goal of our job.

Q: You have received numerous awards for creativity and your originality – how important is this for you and do you have a basic recipe for success?

In 2015 and 2016, we were awarded a lot (4 awards at the EUBEA 2016, 1 award at the BEA festival 2016, 8 awards at the EUBEA 2015…). I don’t think there is a recipe for success; people see a lot of new things thanks to YouTube, Facebook, the Internet… The client continues to ask for unseen performances, WOW effects… The challenges remain bigger and for us, as a creative company, the main goal is to carry straight on with surprising people and bringing emotion. Every day, we work hard to make life a better show to see.

Q: In your opinion what is the best event of all time?

For me, the best event I have seen remains “The Wall” by Roger Waters. The design of this concert, but also the video clip, the music and, above all, the message, have changed my perception and bring me the will to surprise people and give them emotions. The stage was so huge, the effects so unbelievable at that time. Yet just one guy, Roger Waters, remained alone on the stage to bring people to another dimension. What a talent!