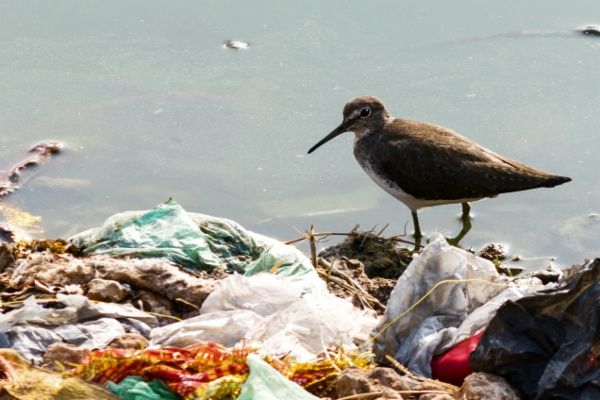 What happens to the plastic that enters our waterways and where it ends up is just one of the questions being looked at by the 14,000 international participants at this year’s Annual Assembly of the European Geosciences Union (EGU) at the Austria Center Vienna. More than 17,500 presentations in over 1,000 sessions will discuss the future of the planet.

Once again Europe’s largest geosciences congress will discuss research findings that change the world, in every sense of the word. Among the current focuses is the impact of plastic waste on bodies of water and fauna. Christian Schmidt, a substance waterflow specialist from the Helmholtz Centre for Environmental Research (UFZ) in Leipzig, confirmed that virtually every single body of water worldwide is contaminated with plastic.

Discarded plastic ends up in rivers
Europeans produce 26 million tonnes of plastic waste each year, equivalent to around a tenth of the global total. “Europe has excellent waste and disposal management systems in place with around 100% of all waste disposed of properly,” Schmidt confirmed. “Methods include recycling (30%) and thermal use (40%) as well as professional disposal at landfill. Unlike in emerging and developing economies where rubbish is often illegally dumped in marine and aquatic ecosystems, European waterways are primarily contaminated through rainwater drainage, e.g. road and combined sewage overflows where untreated domestic waste water empties into rivers.

Plastic enters the water system through overflows and subsequently reaches the nearest water source during the next heavy rainfall.” Carelessly discarded rubbish and processing waste, such as packaging and insulation materials used in industrial or residential applications, are simply washed away into rivers. “The plastic content of aquatic and marine ecosystems varies enormously. One indicator for the degree of contamination is the presence of settlements in the catchment area. Put another way: the more people that can theoretically divert waste into a river, the more polluted it will be. Around 80 million people live in the Danube basin. Rivers of this size carry disproportionately more waste into the world’s seas and oceans, purely due to the amount of industry and river traffic,” Schmidt explained.

Microplastics enter global water cycle
One area that has not yet been properly researched is how long it takes for plastic to break down. “Although we know that plastic breaks down in time with exposure to the elements, this process simply produces micro and nano plastics. It also involves chemical weathering, which releases harmful additives such as plasticisers and fire retardants. And it is still unclear how long it takes for this to happen,” Schmidt cautioned.

According to the current state of research, plastic simply breaks down into smaller and smaller pieces before entering the water cycle, invisible to the human eye. Contact with the river bed or other flotsam breaks the plastic down still further, grinding it into ever smaller fragments. Pieces of plastic that measure less than five millimetres in diameter are categorised as microplastics. These microplastics are either ingested by animals or washed out to sea with larger pieces of plastic. “Organisms in land-based bodies of water are fundamentally more robust as natural particle contamination is inherently greater. Sea dwellers are much more at risk of taking on plastic as they are more likely to filter their food out of the water,” noted Schmidt.
In some places there is six times more plastic than plankton in sea water and plastic particles build up inside the plankton themselves. When microplastics are ingested by sea creatures the toxins ultimately end up in fatty tissue. At this size they are fat-soluble and highly persistent. The toxins enter the food chain through larger animals and ultimately end up on our plates.
“The only way to break the chain is to reduce the plastic footprint in the long term and have greater awareness of the subject. From today’s perspective, use of plastic will never disappear completely, and neither should it. However, every single one of us can easily cut the amount we consume to an absolute minimum, primarily through doing away with single-use packaging. All of the plastic produced – several million tonnes each year – remains in the environment for a very long time to come, with consequences for all of us that are not fully understood,” Schmidt concluded.

Broad range of topics at 2017 EGU Assembly
Among the other themes under discussion at the five-day congress are environmental changes in the Arctic and their ramifications for the planet, as well as the reasons behind mass extinctions over time, using the dinosaurs as an example.
The session led by EGU President Hans Thybo and Christiana Figueres (executive secretary of the UN framework convention on climate change 2010–2016 and founder of Mission 2020) held under the banner of “Make facts great again” will look at how scientists can take a stand for science in the post-factual era. These and other focuses will be presented at a series of on-site press conferences.

PICO as a presentation option
A total of 17,500 poster presentations will give young scientists the opportunity to make an active contribution at the annual assembly. No other congress gives so many participants the opportunity to make an impact. Delegates can use the PICO (Presenting Interactive Content) tool, developed by Austria Center Vienna partner enterprise H82 Medientechnik specifically for this event, to present their results. At certain points during the congress individual participants are given two to three minutes to give oral presentations of the highlights of their work. Afterwards, audience members can call up the presentations as PowerPoints, animations, films or PDFs on large-format, plasma touch screens and contact the authors directly to discuss the content.

About the EGU
The European Geosciences Union (EGU) is the continent’s largest geoscientific association. It focuses on different disciplines including earth, planetary and space science. Founded in 2002, its annual congress is Europe’s most highly respected geosciences event. The EGU General Assembly brings more than 14,000 scientists from over 100 nations to the Austria Center Vienna each year. The 2017 EGU Congress will take place from 23 to 28 April. Further information: http://media.egu.eu/registration/