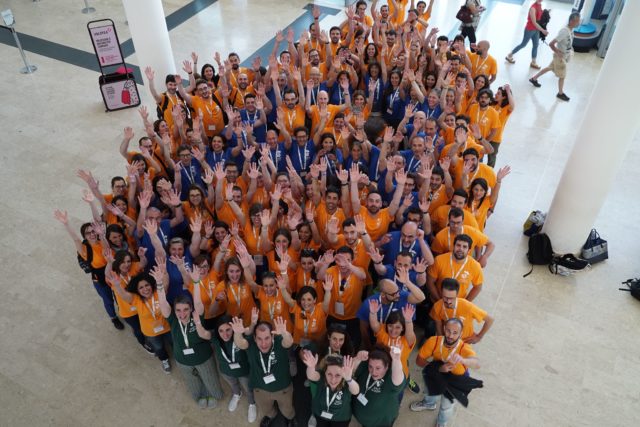 The SIAARTI Academy (Italian Society of Anaesthesia, Analgesia and Intensive Care) went to Lampedusa for a unique training event.  For four days opinion leaders and specialists met to confront issues of emergency medicine. Attendees included more than 100 residents from 38 Italian post-graduate schools who participated in classes and took part in simulated emergency operations.

Emergencies and disasters are not simple or predictable events. Through the use of simulation technologies, first responders and medical personal can participate in guided learning replicating real world experience. This singular opportunity improves organizational and logistic techniques in evolving scenarios while teaching the best procedures to save human lives.

For this first edition of the SIAARTI Academy, the Association and AIM Group International felt the small island of Lampedusa would be the most appropriate host. A backdrop for migrant boat landings and major socio-sanitary challenges, Lampedusa is well acquainted with human suffering and known for its ability to handle emergencies. Organisers also wanted to demonstrate that Lampedusa can be home to events, congresses and educational initiatives. It represented itself as a destination capable of satisfying the needs of both the Italian and international meeting industry. In fact, its airport is equipped with numerous multifunctional spaces adaptable to various training needs.

This first full-scale European training project offered theoretical sessions including plenary, a series of lectures for smaller groups, hands-on sessions with experts, and sessions with stations complete with the most up to date simulators. Feelings were also high during the testimony of Doctor Pietro Bartolo. He is the doctor responsible for the outpatient clinic in Lampedusa and the one who has provided medical care to all refugees and migrants. The moving and extraordinary character of the stories and photos of his daily reality shook many of the participants. It was thanks to these many common moments of simulation and exposure to local realities that the group of specialists were able to build a strong synergy and create a cohesive atmosphere.

The event closed with a simulation in collaboration with the Coast Guard and the Military Corps of the Italian Red Cross. The sinking of a boat was simulated and field hospitals were situated on the beach. The 100 specialists were divided into groups that played different roles such as the wounded, rescuers and observers. This situation was a test of their ability to implement what they had learned in the previous days. It was not just a practical training course, these young doctors “dressed the part” making it a very realistic experience with great emotional impact.

This first edition of the Academy was very successful.  SIAARTI and AIM Group took a bold step by choosing a small island for such a challenging format. Lampedusa is a symbol of Europe’s growing migrant crisis and in the frontlines of providing assistance. What better place to show the impact and effect around the issues of emergency aid in the fields of anaesthesia and resuscitation. The educational value outweighs any logistic complexities. As in many other examples, it is more important to adapt the organisation to the territory.

Gaia Santoro, Project Manager for AIM Group International, points out, “when in September 2016 we first made our site inspection with the client, we thought that the numbers would be around sixty and that we would need two or three conference rooms.  However, much to the surprise and satisfaction of all, 38 of 39 post-graduate schools participated. Now the challenge was to manage a group of over 160 people between students and Faculty in 16 small conference rooms and to organise a very large simulation outside! Of course, you have to be visionary and adapt to the situation but participants’ energy, enthusiasm and team spirit made the hard work pay off.”

The SIAARTI Academy was realized thanks to the patronage and support of the Italian Emergency Relief Body of the Order of Malta (CISOM) and the City of Lampedusa. Here is an example of the meeting industry creating social and economic legacies in the development of a region while contributing to a very worthy endeavour.