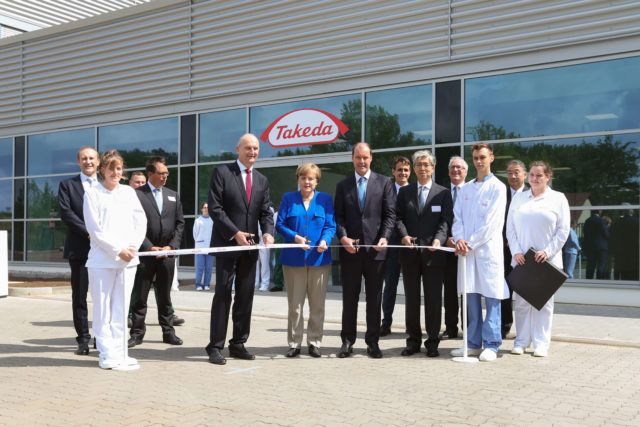 The Berlin office of VOK DAMS, an agency for events and live-marketing, looks back on a long-standing experience of sensitively implementing events with and for political notables.

Thus, when it came to designing and implementing the grand opening of the new Takeda production hall at their location in Oranienburg, Takeda Germany again entrusted VOK DAMS Berlin with this important project. The Berlin-based VOK DAMS team designed an attractive program and took over the supervision and control of the top-class event – in the tried and tested, successful cooperation.

Takeda is a research-driven, global company with a focus on pharmaceuticals. As part of a global production network, Takeda operates production facilities in Oranienburg and Singen in Germany. In Germany alone 2,000 employees work for Takeda, and 766 of those are currently employed in Oranienburg.

500 guests from politics and industry as well as from the company attended the festive ceremony. In a ceremonial opening pageant, chancellor, ambassador, premier and CEO jointly cut the red ribbon and inaugurated the new production complex.