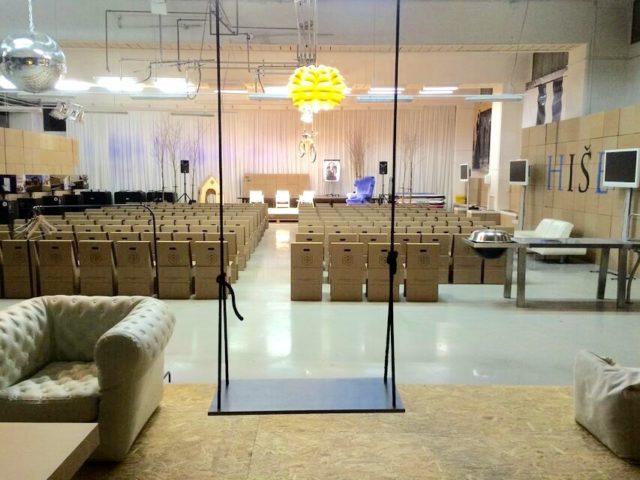 From a printing house to an innovative place for special events

City of Design Slovenia is a pop-up centre for the creative economy and a place for new business opportunities, reflection and new visions, exchange and co-operation, ideas and solutions, and the presentation of the latest novelties. It is a space that has come to life in the former Mladinska knjiga print shop on Dunajska cesta in Ljubljana.

City of Design Slovenia is located at 123 Dunajska cesta street in Ljubljana. The atmosphere in the factory halls of Savin Sever’s architectural monument (the former Mladinska Knjiga printing house) is created by the high ceilings, contrasts of light, the scale of the exceptional industrial architecture and unexpected features, all powering the idea of a parallel city made from cardboard.

The vast majority of City of Design Slovenia is made from cardboard, from cheap, and perhaps even the cheapest, building material. The Faculty of Architecture (University of Ljubljana) designed the concept of place and objects, delivering a space with a story and a touch of creativity. The squares and streets inside the building are named after renowned Slovenian architects, as the building itself is both a former printing house and a cultural monument (the architect Savin Sever received the Prešeren Fund award in 1967) with great meaning to the newly created City of Design Slovenia, so the streets here are named after Jože Plečnik, Edvard Ravnikar and Savin Sever.

The spaces are ideal for those who want to fascinate their guests, to surprise them and leave a sense of boldness on them. The City of Design Slovenia is a platform and definitely an experiment that is challenging for many different kinds of occasions.

In addition to festivals organised independently in City of Design Slovenia, they mostly host corporate events, with to date events having been hosted for Jack Daniel’s, Cynar, Peugeot, Compass, Gerebit…

There is adequate infrastructure in place for catering and customers can bring their own guest caterer for which the City of Design Slovenia can help with some advice and information.