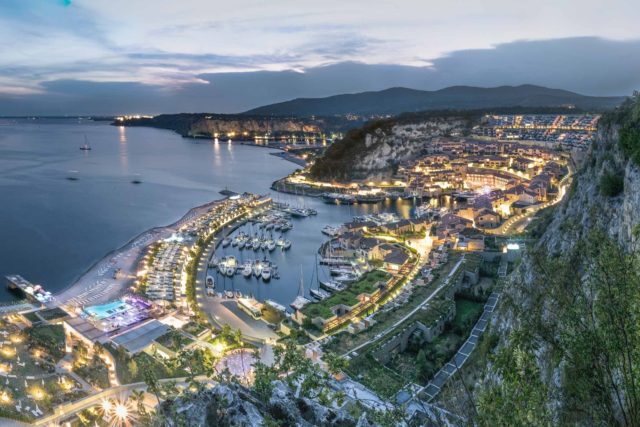 LUXURY MEETINGS ON THE ADRIATIC

Some years ago, in the Bay of Sistiana that stretches out towards Trieste, an ambitious idea of one of the biggest Italian construction companies based in Udine to build a luxury tourist resort in an abandoned quarry first took root. The entrepreneurial de Eccher brothers behind the company were subsequently able to transform their dream into a reality, one that is today worth well over 350 million EUR. The entire project was a joint venture between different investors, but the lion’s share of the financing came from the the Rizzani De Eccher construction group and the Rilke real estate fund.

In August 2014 the resort, together with its own marina, luxury Hotel Falisia, spa centre and unique congress centre, was officially opened to the public, and already today the resort is likened to prestige destinations such as Saint Tropez, Porto Cervo and Cortina d’Ampezzo.

The resort was designed by mastermind architect Francesco Lupparelli from nearby Sistiana, who has made the building look truly stunning from any viewing angle. The complex stretches across 3.5 acres of land and was planned as a compact seaside town, perfectly complementing the existing cliff shore. There are 460 units of accommodation in the form of villas, terraced houses and independent apartments that make up the complex. Portopiccolo has also received the Green City certificate, meaning it is 100 percent ecologically geared. Electric energy in Portopiccolo is sourced from a solar power plant and geothermal energy is used to heat up the water.

Part of the prestige American hotel chain Starwood, Hotel Falisia is positioned in their Luxury Collection trademark and was the first five-star hotel in all of the Friuli – Venezia Giulia region. Each and every one of the 65 rooms in the boutique hotel tells its own story. They range from 35 to 120m2, the latter being the size of the presidential suite. The hotel offer includes two restaurants, a wellbeing centre and three conference halls. The interior architecture takes its inspiration from the shipbuilding heritage of the area and subtly resembles the inside of a luxury cruise ship. Everything conveys an impression of elegance with a touch of timeless exclusivity.

A town within a town

When entering Portopiccolo through the lower entrance of the Sistiana Bay a new world for the truly big spenders opens up – a wide array of shops and fashion boutiques with clothes, shoes and furniture is open for business, and the restaurants and bars are working full steam ahead too. The restaurant choice is very diverse, with everything from the Beach Bar Maxi, serving cocktails and bistro cuisine, to the more prestige Bris restaurant. The offer is topped off by numerous bars and the now legendary home-made ice cream shop Gelateria Fiordilate. The morning hustle and bustle resembles the vibe of a Mediterranean coastal city, but instead of fishing boats it is luxury yachts and sailboats that are adorning the marina.

Congress Centre Portopiccolo Pavillion can host 372 participants in the Neptunia Hall and makes a strong impression with its terrace for coffee breaks or receptions that offers sea views. Its exclusivity makes it a particularly popular choice among wedding planners. The integral parts of the centre consist of two spacious and excellently equipped conference halls – Saturnia, with space for 215 participants, and Victoria, with space for 100 participants. The resort itself isn’t lacking in other venues as well – on the clifftop stands an administrative building with a smaller conference centre and halls with views of the entire bay of Trieste. Hotel Falisia also houses a smaller business centre with space for 35 guests. As you would expect from a resort of this calibre, all of the halls are excellently furnished and have great access, as there is an underground car park with 1,220 parking spaces.

Events on the beach

They call ‘the artificially crafted beach part’ of the Beach Club resort, a posh beach with pergolas in terraces by the turquoise sea by day and a perfect venue for receptions and parties by night. The Marina & Yacht Club is another picturesque venue, very quickly adopted by organisers of automobile/maritime themed events. There is no lack of venues for all kinds of corporate events scattered around the resort and meeting planners have been using them for incentives, workshops and new launches for cars, yachts and other products. These special event spaces total a whopping 6,490m2 altogether.

The cuisine is something that is taken very seriously at the resort. The entire culinary story is concentrated in the Bris restaurant, where the menu follows a “less is more” philosophy based on authentic and local Mediterranean cuisine. In a place like this the influence of the sea is unavoidable and one can verily say that Portopiccolo is a seafood heaven. The menu is complemented by an excellent selection of wine from the Karst and Goriška Brda regions and it was something of a surprise to see that they haven’t gone crazy with the prices in this segment. Their culinary philosophy can also be packed into a very admirable catering package for different types of events. As far as we can see, they provide one of the best catering services anywhere in the Adriatic.

Soon after opening its doors, Portopiccolo SPA by Bakel became synonymous with being the best spa in the Alpe-Adria region. Its fame can be accredited to the elegant architecture, soothing Mediterranean climate and a holistic experience that all blends into a harmonious ensemble, all of which can best be felt in the luxurious Panoramic Spa Suite. The 3,600m2 of the elegant wellness centre houses different saunas, indoor and outdoor pools and a fitness centre. The offer also features beauty treatments with high quality Bakel cosmetics. The spa is also popular among day time visitors, coming from all over the Alpe Adria region for a Sunday trip, a weekend self-indulgence or just an afternoon jump in the pool after work.

North of the Sistiana Bay, an incredible view of a town called Duino opens up, inviting guests to come and enjoy the historic atmosphere of the Duino Castle. On the south side of the bay, you are just a proverbial hop away from the enchanting Miramare Castle and its magical and pleasantly cool castle gardens. And one cannot visit Portopiccolo without stopping in metropolitan Trieste, which is only a couple of minutes’ drive away. The Karst outskirts are also known as an excellent incentive destination with bucket loads of possibilities.

Portopiccolo is centrally located in the Friuli Venezia Giulia region and just 20 km from Trieste. Daily flights from the Airport of Trieste connect Portopiccolo to the main national and international destinations: London, Vienna, Munich, Brussels, Valencia, Rome and Milan. It takes less than two hours by car to reach Venice, Treviso and Ljubljana. Portopiccolo is the closest seaside location to Vienna, Klagenfurt, Munich and Salzburg.

A paradise for incentive organisers

Despite the resort being targeted at the rich and famous, more and more regular congress guests and incentive travel organisers are coming to Portopiccolo. It sometimes even seems like the resort was designed solely for them, looking at all the possibilities it offers. Due to the professionalism of their staff, which is setting new standards in the region, ‘Monaco’s little brother’ will await you in top shape and allow you to carry out an unforgettable incentive or congress experience.