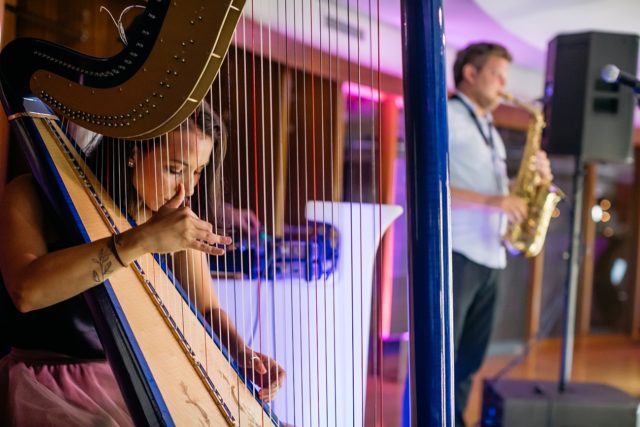 With the event organisers seeking a developed meetings industry city that would give attendees the intimate touch, Ljubljana was the only sensible choice, and so the event was hosted in Slovenia’s capital and largest city. A series of networking activities and dinners provided a great opportunity for independent properties and small collections to build great business relationships and the opening night was hosted at Modna Hiša (“Fashion House”), which was once a thriving shopping hall and recently became the venue for unique events with a fashion-inspired setting. The networking and activity opportunities were held in the renovated Union Hall, which can host up to 850 attendees. The exclusive location of the Grand Hotel Union, located in the heart of the city centre and overlooking Prešeren Square and the Triple Bridge, gave its guests the perfect base to explore Ljubljana and its surroundings during their free time.

BEHIND THE SCENES
Karantanija congress hall: between music, trees and wild animals

In August 2016, Union Hotels in cooperation with Conventa Crossover presented a new “out of the box” meeting concept to meeting planners at the Hotel Lev. This year it was time for a real jungle upgrade of the Karantanija conference hall, which can accommodate up to 400 guests. The carefully designed venue with a jungle theme and a precise eye for detail wowed the attendees. The Union Hotels team designed the venue with a cosy living room feeling mixed with the wild vibe of being in a jungle. The big bamboos and palm trees added the lush, jungle theme, while several flying animals created the jungle wildness. Since we believe in the power of all the six senses, Union Hotels did an amazing job when it came to the culinary delights, prepared by their chefs with a special ‘jungle theme’. For any further snacking the hall wasn’t lacking, with more than 100 kilos of bananas, pineapples and coconuts for visitors to enjoy!

Nataša Keršič Razinger has been appointed as the new hotel manager of the four-star hotel and conference centre. For Nataša, a great enthusiast and proud member of the Slovenian hospitality industry, her career started out at the Slovenian Tourist Board, where she worked as an Assistant to Head of Promotion and Marketing. Following that, she joined and became acquainted with the MICE industry as a Sales Representative at the Grand Hotel Union, where she instantly fell in love with the hotel industry. She later joined the team at the Best Western Premier Hotel Slon as Marketing Manager and PR representative, where she remained for four years. Her heart then led her to Slovenia’s hidden paradise, the city of Bled, in 2011, where for the past six years she has been a great success in her role of managing director of the four-star Best Western Premier Hotel Lovec and Hotel Kompas.

Ljubljana’s hospitality industry is now proud and delighted to welcome Nataša back to the capital city, to have her share her knowledge of and positive attitude to the daily routine and challenges that tourism and the meetings industry brings to this lovely city. The Hotel Lev team and the key members are very happy to welcome Nataša on board and are eager for her to bring Hotel Lev and its staff to an even higher level regarding services, the hotel offer and its congress centre.