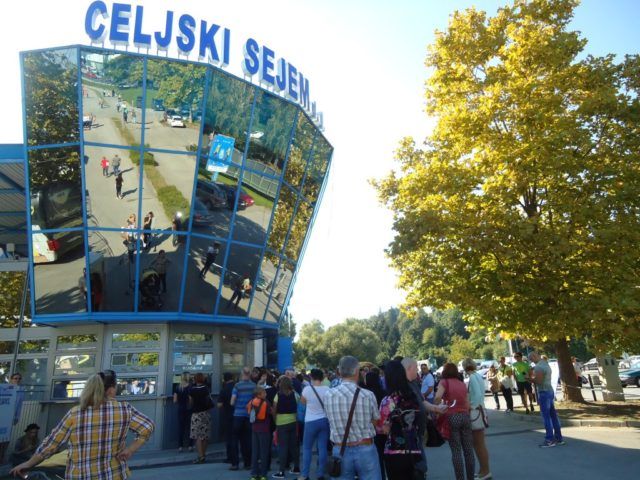 Amongst the biggest trade fair centres in Slovenia

In the area of trade fairs, Celje Fair is best known for its International Trade Fair (MOS), which is one of the largest trade fair events in Slovenia. The opening event of the Golvec Hall in 1976 marked a turning point in the history of the fairground, when the organisation of trade fairs was professionalised. The next turning point was the opening of the Celjanka Hall in 1995 with its modern conference halls. Since 1996 it has been operating as Celje Fair Plc. (Celjski sejem d.d.). Today, Celje Fair has 60,000m2 of exhibition space, of which 22,000m2 is covered. This ranks it among the biggest trade fair centres in Slovenia. It organises from 9-11 trade fairs per year as well as numerous other events.

LOCATION
The city of Celje has two centres. The old historic part of the city and the newer part with the fairground and shopping centres along the Mariborska cesta road. This is also the location of Celje Fair, an important trade fairground of local and national importance. It could even be said that it helped shape the identity of this part of the city. Today, however, it is physically quite separated, and also poorly connected with the city, as it is surrounded by shopping centres which have led to it losing part of its identity. The green areas next to the fairground are particularly worth highlighting – the Golovec hill is the city’s recreational centre and offers the fairground a kind of natural shelter.

ACCESSIBILITY
Celje is the third largest city in Slovenia, and is well connected in terms of transport with other parts of Slovenia as well as neighbouring countries. The location is easily accessible and the majority of visitors to Celje travel on the Ljubljana-Maribor motorway. This is undoubtedly a great advantage of the fairground. The fairground has 2,000 parking spaces, which, however, is not sufficient during the largest events it hosts and parking represents one of its biggest problems. The connections with Slovenian railways are commendable – the fairground can be reached on foot from Celje railway station – whilst public transport in the city is also well organised.

COLD APPETIZER – Architecture and Aesthetics
Among the trade fair halls, Hall L, which was completed in 1999, is the most outstanding. It was designed by the architect Jože Kopitar, who was also responsible for the town planning of the area of Golovec. The Golovec Hall and Halls C and D are also his work. As a pupil of the Slovenian architect Edvard Ravnikar, he was a follower of functional, modernist architecture, and, from this perspective, he was among the best in Slovenia. All the demands of convention organisers were taken into consideration, including ceiling heights of 6-8 metres, which enables the installation of over-sized stands. The latest acquisition was Hall K, which covers an area of 3200m2 and was built in 2004. Perhaps the greatest hindrance is the entrance to the fairground, which doesn’t seem appropriate and we hope that the plans for renovation of the fairground will one day be realised.

WARM APPETISER – Staff and customer service
The organisation of trade fairs and events at Celje Fair is carried out by a small, but very professional team. The most visible result is the success of the MOS International Trade Fair, which celebrated its 50th anniversary last year. This is a particularly special achievement, since trade fairs in general are in crisis. The team does not lack knowledge and skills and is constantly developing and opening new trade fair avenues. An additional confirmation of their good work are the loyal exhibitors, who did not abandon them, even during the times of the biggest economic crisis.

MAIN COURSE – Quality of facilities
Celje Fair is proud of its state-of-the-art infrastructure – the most modern in Slovenia. It offers a wide range of areas of very different quality classes. Among the trade fair halls, the most outstanding are Halls L and K, and the business areas in the Celjanka Hall. In terms of quality, Halls C and D are much less well-designed. From a functional perspective, this causes a great challenge and probably hinders even better marketing. This is one of the reasons that an architectural renovation is being considered, as it would even further improve the fairground’s competitiveness. They are even considering building a hotel, which is a problematic area of the city’s fairground facilities.

DESSERT – Catering and additional offer
A speciality of the fairground, which you either love or hate, is its improvised catering facilities on stalls. Many trade fairs are remembered for this. It would be possible to discuss the quality of such facilities at length, however, in our opinion they do have a certain charm. We welcome the fairground’s move to organise culinary festivals such as the ‘Coffee Festival’ and the ‘Kulinart Festival’. We believe that part of the experience from both events will become a regular feature of the fairground’s programme.

FLOP – NEGATIVE SURPRISES
At times of large events, Celje is significantly lacking in hotel capacity. This can partly be addressed through visitors staying in nearby thermal spas, however, for the continued development of the fairground and events, a new hotel would be a welcome and necessary addition.

TOP – POSITIVE SURPRISES
The extensive exterior areas enable a wide variety of uses and the display of exhibition equipment in action. An off-road polygon has already been set up. This is also a very attractive feature for event organisers.

EXTRAS
The MOS Celje Trade Fair is the parade horse of trade fairs, which has been in existence for 50 years and has justified its reputation as the largest trade fair of its kind in the region. During this period of specialisation of trade fairs, this is an achievement worthy of respect.

FINAL IMPRESSION AND CREDIBILITY
The development engine of the fairground was its strategic position at a crossroads of important routes, halfway between Vienna and Venice. At the same time, the fairground is located away from the newer hub of the city of Celje. Throughout its existence, the fairground has been enhanced by a corporate mentality, which personifies its parade horse – the legendary MOS International Trade Fair. It was in this spirit that solar panels were installed on the roof of the fairground, and it also became one of the first companies in Slovenia that received the rights to use the ‘CO2 neutral’ sign. It is constantly innovating and updating its trade fair events. It is lagging behind, however, in the area of congress activities, which has been developed more as a supporting rather than a main trade fair activity. Investments are awaited in order to improve the direction of development in this area, and we hope that the plans that are circulating in the media will come to fruition.