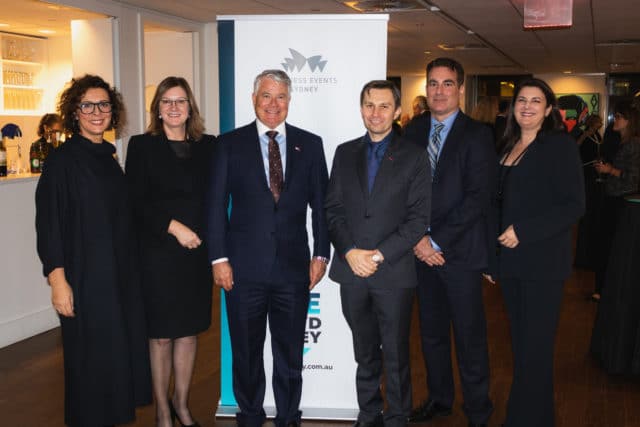 The annual Sydney Speaker Series aims to highlight the true value of global meetings as a catalyst for conversations and change for international organisations. Hitting the road, Team Sydney, shared insight and intelligence on the impact of these meetings to the future of business and society.

“Sydney is a city that stimulates serious change,” said Lyn Lewis-Smith, BESydney CEO.“Our mission is to bring the world’s leading organisations and experts to Sydney for their next conference, congress or meeting. Through these platforms, we are attracting senior business, government and academic leaders from around the world to our shores – earning our country’s leaders a seat at the table in international problem-solving.”

In New York, Professor David Sinclair AO, Geneticist and BESydney Global Ambassador, spoke to an exclusive audience at the first-ever collaboration between BESydney and Advance (Australia’s leading global network of Australians and alumni overseas), as part of their ‘Salon Series’. The 2017 Advance Global Award Winner and Time Magazine’s Top 100 Most Influential People in 2004, Professor Sinclair shared his story of his journey as an Australian entrepreneur, researcher and international collaborator.

“Australians are leaders and changemakers in thought and innovation in many fields and endeavours across the globe,” said Serafina Maiorano, Advance Global CEO and BESydney Global Ambassador. “Professor Sinclair is a true example of an Australian global leader and innovator kicking goals on the world stage.”

In London, The Right Honourable Baroness Valarie Amos CH PC, the former British High Commissioner to Australia and United Nations Under-Secretary-General for Humanitarian Affairs and Emergency Relief Coordinator spoke to the importance of servicing both ‘Local vs Global Societies’.

ICC Sydney Director of Business Development, Beverley Parker said she was delighted to be showcasing the venue and the destination of Sydney across two important events in two different continents. “As an international convention centre, our network of clients extends all over the world. We are delighted to join BESydney in this series as we continue to create connections and build relationships, while sharing the message of Sydney and the extraordinary experiences that await for business events at our venue.”

“The Sydney Speaker Series provides Sydney with a platform to tell the stories of world-leaders from our worldwide network – Ambassadors, alumni and honoured guests alike. The forum highlights the economic and social impact of industry prosperity on local communities, and the power of global meetings to bring about change,” said Ms Lewis-Smith.