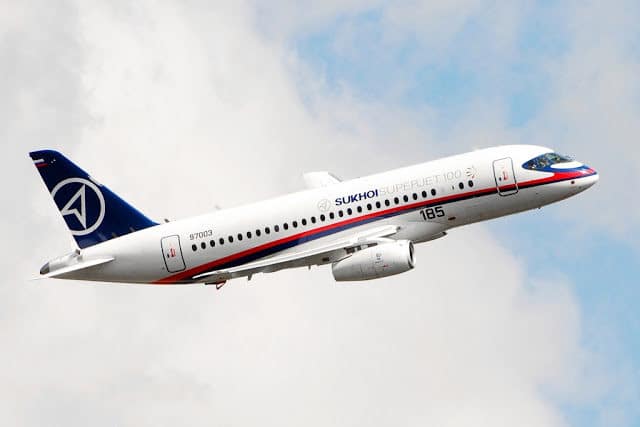 Adria Airways will take delivery of its first of fifteen Superjet 100 aircraft from Russia’s Sukhoi Civil Aircraft Company (SCAC) in April 2019. The Slovenian carrier and the Russian plane manufacturer, which signed a Letter of Intent for the jets last month, must first ink a binding contract for the deliveries. The President of the Sukhoi Civil Aviation Company, Alexander Rubtsov, said, “We are working on that. I think that in the first quarter of next year we will sign the contract or maybe even earlier, in February, because based on our plans, the first deliveries are scheduled for April”. According to Mr Rubtsov, Sukhoi will deliver both new and already built airframes to Adria. He noted that the planemaker has accumulated more than a dozen manufactured aircraft that have not been handed over to operators.

“The SSJ100s will be deployed primarily on Adria-operated flights, while its existing Airbus and Bombardier equipment will be increasingly used for wet-lease purposes. According to Mr Rubtsov, the carrier’s maintenance provider, Adria Tehnika, will play a “significant role” in servicing the jets. Adria Tehnika is a separate company from Adria Airways and is a Bombardier Authorised Service Facility. Its agreement with the Canadian plane manufacturer is set to last until 2021. However, the SCAC CEO also noted that the company will establish a joint venture for the maintenance and repair of Sukhoi aircraft at Ljubljana Airport. “That service platform will secure the operational reliability of SSJ100 aircraft in Europe”, he said.

The Superjet 100s will be supplied to Adria under a long-term lease and will be financed by European banks. The airline itself does not own any aircraft. Its two Bombardier CRJ700s are being leased until December 2019, one A319 will stay with the company until 2021, with the leasing contract for the other two Airbuses expiring in April and May 2022. The Slovenian carrier has four CRJ900s under contract until 2022, another two until 2026 and 2027, while one of the jets is being leased through a pay-by-the-hour agreement, where Adria pays its dues to the lessor based on aircraft utilisation. Adria Airways’ CEO, Holger Kowarsch, previously said the Sukhoi jets will “completely support Adria’s development strategy”. “During the past two years we have been analysing the SSJ100 and came to the conclusion that all the technical and operational characteristics of this aircraft would suit our strategic goals the best”, he added.