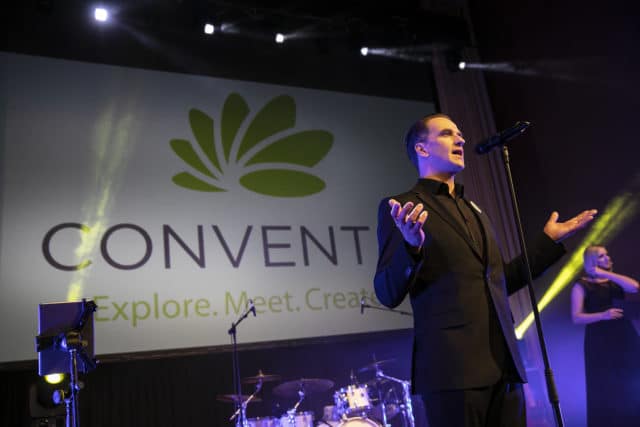 Conventa, the trade show for meetings, events and incentive travel, for the 11th year in a row gathered the representatives of the meetings industry of New Europe and event organizers from around the world. From the 23rd to the 24th of January, Slovenia’s capital was transformed into the hub of the New Europe’s meetings industry.

Conventa, organised by Toleranca Marketing and Slovenian Convention Bureau in partnership with Ljubljana Tourism and Slovenian Tourist Board, this year welcomed 132 exhibitors from 15 countries and 238 hosted buyers from 46 countries, among which 61 were Slovenian event organizers. Conventa once more kept the promise to gather high-quality hosted buyers with the real interest in the region, among which 86% visited Conventa for the first time. Ljubljana was for two days a business hub for event organizers of the New Europe region, where 4.274 One2One meetings took place.

According to the results of a survey carried out among hosted buyers and exhibitors, the 11th Conventa has been written into congress history in terms of the number of the best results from the satisfaction survey.

Here are some highlights:


In addition, Conventa every year rewards extraordinary achievements in the meetings industry. With the Conventa Hall of Fame the organisers reward an individual who has with her or his extraordinary and invaluable effort made a mark and impacted the development of the meetings industry. This year the title went to the catering partners of Conventa: Vivo Catering, Jezeršek Catering, Kaval Catering, and Union Hotels. While the Ambassador of Conventa is the title that goes to an individual or company that has been a longstanding partner and the greatest ambassador of the trade show. The prestigious title went this year to the ICCA (The International Congress and Convention Association) and was collected by Elif Balci Fisunoglu, the ICCA Regional Director for Europe.

Karmen Novarlič, Head of Business Communication Department at Slovenian Tourist Board: »Conventa ranked as must go to event on the European congress calendar for the key stakeholders in congress tourism, which is attended by more than 120 international partners from 44 countries and more than 100 Slovenian business partners this year. The evidence of great importance that the trade show gained are also the statistics from the past 11 years: over 2,500 buyers from abroad, more than 1300 exhibitors and more than 27,000 meetings are pinning Conventa among most important events of business and congress tourism in the region and beyond. The trade show also makes an important contribution to the reputation of our country as an excellent host of quality and professional business events. And impresses foreign visitors with enthusiasm, sustainable approach and genuine hospitality, on Slovenia as a boutique and authentic destination for 5-star experience.«

Jan Oršič, Head of Ljubljana Convention Bureau: »Ljubljana Convention Bureau at Ljubljana Tourism is a proud partner of Conventa and we are pleased that our destination can boast of an event that has already marked the upcoming congress year for the eleventh time by bringing together the whole region and the providers from around the world. Conventa entered the new decade as an established and recognizable event of the international congress industry, which significantly contributed to the establishment of Ljubljana and Slovenia as a meetings destination. The positive responses from invited guests and exhibitors this year again confirmed that Conventa is a trade show with a bright future.«

The organisers of Conventa are therefore proud to present the results of the survey, which confirm the high professionalism and excellence of the event and the satisfaction of all those involved.

Check out the results here.