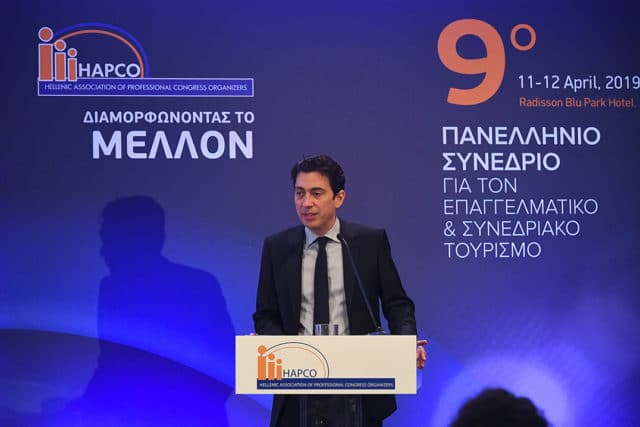 This is Athens-Convention & Visitors Bureau participated actively in the discussions around industry perspectives during the 9th Panhellenic Conference on Business and Conference Tourism, organized by HAPCO (Hellenic Association of Professional Congress Organizers) at Radisson Blu Park Athens Hotel, on the 11th and 12th of April. Other participants included prominent executives of the MICE industry, as well as representatives from the Technology, Management and Consulting sectors.

A number of significant issues were analyzed through round-table discussions and speeches:

As Athens rises as a top MICE destination -now ranked 26th in the world’s top convention tourism destinations according to the ICCA 2017 Annual Report- its selection to host key medium and large-scale conferences, has been showcasing the city’s great potential and consolidating the local industry’s extensive expertise in such events.

During the opening speech of the HAPCO Conference, Mr. Alexis Galinos, Managing Director of Athens Development and Destination Management Agency (ADDMA) presented the vision of This is Athens & Partners, the unique public-private partnership led by the City of Athens, that brings together major stakeholders, including the Greek Tourism Confederation (SETE), AEGEAN, the Athens International Airport, Lampsa S.A., Lamda Development, and Ioniki Hotel Enterprises S.A.

“We shall seize the momentum and attract small and medium-size international conferences over the next period. The timing is optimal: our team is growing with the right tools in hand. We have the know-how and the necessary financial resources to set up our international networking and outreach”, mentioned Mr Galinos during his inaugural speech.

Mr. Galinos who also participated in a round-table discussion under the topic: “Development Strategies in a constantly changing tourism/conference market”, had the opportunity to analyze Athens’ growth potential as well as the importance of a closer collaboration between the city’s stakeholders’ to grasp it. Other panelists included the President of the Hellenic Chamber of Hotels, Mr Vassilikos, the CEO of Marketing Greece, Mrs Ioanna Dretta, the Manager of Thessaloniki Convention Bureau, Mrs Sotiriou and the General Secretary of Tourism Policy and Development of the Ministry of Tourism, Mr Gialas.