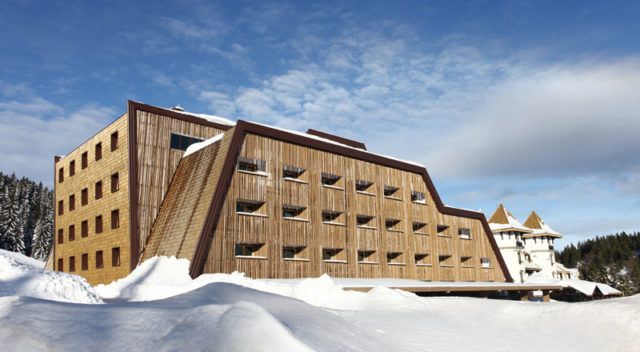 For all of us who cheered on the skiers at the 1984 winter Olympics in Sarajevo the skiing centre is dear to our hearts. The Jahorina Olympic mountain, with its 20km of ski slopes, hosts one of Bosnia’s best hotels, one for which we could add another category to our Hidden Congress Guest section, as the Hotel Termag is a genuine alpine/mountain congress hotel. The most luxurious hotel on Jahorina was opened in 2005 and was a boon in terms of extending the winter season with congress tourism, hiking and mountain biking. The skiing centre is also developing from season to season and according to the locals it now provides a reliable coat of snow from November to March, adding up to 175 snow days.

Jahorina is just 30km from Sarajevo and 32 years after its construction the road to the peak remains in good shape. The best form of transportation is therefore by car, or by bus from one of the agencies in Sarajevo. A good 9km will get you to Pale.

The hotel is situated adjacent to the ski resort, surrounded by mighty trees and the dramatic mountains. Its creator is a renowned architect from Sarajevo, Amir Vuk Zec, who has been able to achieve an excellent sense of being very much in touch with nature. The use of wood and natural materials like tree trunks in the halls are hallmarks of what makes the hotel so unique. A very specific and recognizable architecture has been formed that now symbolizes an iconic spot on Jahorina. The hotel meets all of the strictest standards of the hotel industry and has quickly gained a lot of attention and positive feedback from both locals as well as tourists and a professional clientele.

Traditional hospitality, a general sense of kindness and attention to professionalism are all trademarks of Hotel Termag. The food in the hotel is superb and the service is also deserving of praise. The staff are incredibly considerate and ensure that guests are taken care of like they are in their own home rather than tourists. Bosnia and Herzegovina is definitely an excellent choice if you like to eat well without spending a fortune. They make fantastic ćevapi, sudžukice, uštipci, kajmak and mix it up nicely with European cuisine.

The hotel rooms all have a bit of traditional flavour left in them but also feature very elegant and modern furniture. An excellent choice of materials, warm colours, and touches of wood all combine to give you a feeling of comfort and homeliness and the views of the surrounding forests from the balconies are simply amazing. The hotel offers a congress centre with views of the ski slopes and a very nicely thought out lobby for coffee breaks or exhibitions. The hall is suitable for 350 guests and can be split into 4 smaller halls. Despite being very modern even the congress centre has a pleasant, comforting feel to it.

For entertainment the hotel offers ping pong tables, billiards and a bowling alley, which seems to be pretty popular amongst guests.

Out of the winter season the offer is focused mainly on the hotel and the incentive activities that revolve around it, which have to be organised separately. On the other hand, getting away from the hustle and bustle of the city is the number one advantage of Jahorina.

A traditional brand of kindness and the hospitality of the staff.

In Sarajevo and its surroundings, the spirit of the 1984 Olympics is still present and there is no better way to experience it than up in the mountains. The Olympic rings, Vučko, and all of the infrastructure that is slowly decaying might just be the best backdrop for a top selfie. With Hotel Termag, Jahorina has acquired a fresh verve, as this is an excellent congress hotel. It has the right mixture of design, functionality and broad offer that allows for the organisation of corporate events – this hotel is definitely changing Sarajevo’s congress offer.