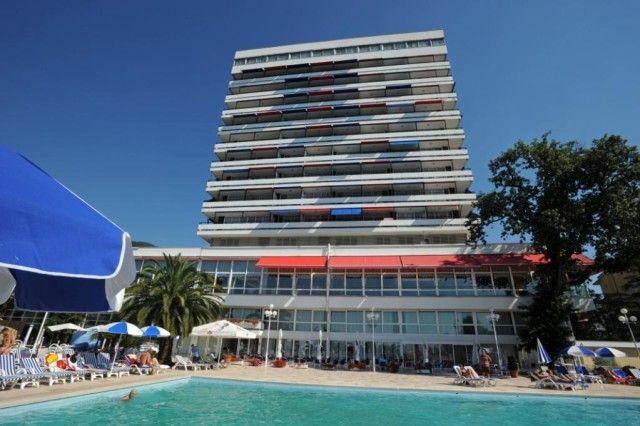 Opatija is itself a tourist and conference pearl of the Kvarner bay. The roots of tourism began in 1884 with the first hotel on the Adriatic coast, Hotel Kvarner. Hotel Ambassador was built in 1966, designed by Croatian architect Zdravko Bregovac. It has a prime location near Opatija’s city centre, but it still maintains its privacy. It is situated above the private beach and Lungomare, a 12-kilometre promenade on the coast of the Adriatic Sea.

Opatija is within a 5-hour-drive radius of some of the most important towns of Southern and Central Europe, such as Zagreb, Split, Ljubljana, Venice, Vienna, Budapest, Salzburg, Munich and Belgrade. There are five international airports in the vicinity, the closest being Rijeka (the island of Krk, less than 1 hour’s drive away), and the four others being Pula, Zagreb, Ljubljana and Trieste, all within two-hours’ drive. By train, Opatija can be reached from the railway station in Rijeka (15 km away and by using the Opatija-Matulji railway station).

When decending to the Opatija coast the tallest building in Opatija will grab your attention with its white façade. The architect Zdravko Bregovac is the author of many hotels on the Adriatic coast and without many changes being made during the renovation it is still very functional for leisure as well as for the conference guests.

If Opatija is often called “an Old Dame”, then hotel Ambasador is its “Gentleman”. Here is a hotel with tradition, where everything is well laid out and well organised. A first impression can only be had once, and there first impression here is helped by the professional staff at the entrance, fresh flowers in the lobby, the professional receptionist and the engaging waiter in the lobby bar. Everybody knows what is his or her role and that makes the guest or client feeling relaxed from the first moment. The rooms in the main building were recently renovated in a fresh and modern style, while in the Villa Ambasador, which is also a part of the hotel, you can enjoy some of the classic hotel rooms. Breakfast is one of those experiences where you could easily spend some more hours enjoying the selected dishes, especially the wide selection of pastries. For smaller conference receptions, lunches or seated dinners the outdoor area always offers a fine solution – there is nothing quite so inviting as the scent of the Mediterranean sea and plants.

Hotel Ambasador is still the largest convention hotel in Opatija, with a plenary hall for 525 participants and six break out rooms, all of them conveniently located on the same floor. As the MICE business has been increasing over the last years, they are planning to invest in enlargement of the conference capacities in the near future. As the hotel is part of the Liburnia group offering 10 hotels in Opatija, conference social events can easily be organised in nearby hotels. One of the recommended options for a gala dinner is the historical ballroom in Hotel Kvarner.

Wellness & Spa Five Elements covers an area of 1,300 square metres over two floors. It was created as a combination of the ancient Chinese feng shui philosophy and modern wellness programmes.

Room prices for conference guests can be quite high in June when the tourist season starts.

Organising a conference with the Ambasador team is what professional congress organisers are looking for, as flexibility and willingness to help the client in case of any unpredictable situations is one of the points of pride of the Ambasador team.

If you are considering the Adriatic region for your next event, definitely don’t overlook Opatija. Its charming hospitality tradition stretching back to 1844 will easily convince you to go there. People have hospitality in their DNA and you can feel it with every step you take in Opatija.