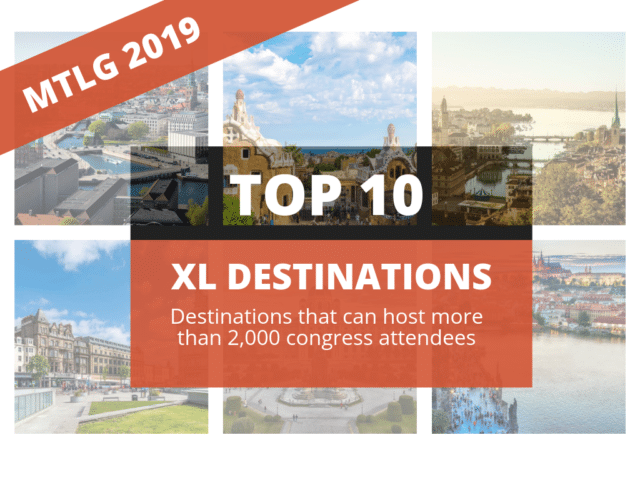 Ever since 2010, the Editorial Board of Kongres Magazine has been presenting fresh and interesting meeting destinations to international meeting planners.

Till this day we have presented 84 Meetologues from 23 destinations. Each destination is evaluated based on 75 different criteria that enable fair comparison of the destinations. Meeting organizers appreciate the expertise, value and practicality of this guide through congress destinations.

SO GOOD THAT WE COULDN’T IGNORE IT!

There are cities in the world which can prove quite stressful for congress participants, and then there is Vienna. From first-hand experience I can confirm that the city is easy to get around, pleasant and enjoyable and already belongs among the so-called ‘smart’ cities of today. Vienna’s city authorities are convinced that the ‘smart’ city can grow whilst at the same time reducing the use of natural resources. One of the crucial initiatives is the intensive inclusion of the city’s residents, since there is a desire that innovations help improve living standards for all. It is all this that places Vienna among the smart cities of the future and makes it an excellent meeting destination.

The premier capital of Northern Europe is Scandinavia’s most fantastic city and the center of the most dynamic region in Europe, the Øresund Region. The city is one of Europe’s oldest capitals with an exclusive royal touch – the monarchy in Denmark is the oldest in the world. The town has several large convention centers such as Forum Copenhagen, Bella Center and Øksnehallen which often host international fairs and conferences. The Medical Valley is on the outskirts of the city has large biomedical centers where many conferences are held. It has large venues, as Denmark’s national stadium Parken, Brondby Stadium and the newly built Royal Arena, which is expected to open in autumn in 2016. Overall, Copenhagen is a safe city to live in and a destination filled with special venues.

According to Numbeo, Zurich is a city with one of the highest “quality of life” indexes in our comparison and a similiar result is provided by Mercer. Switzerland’s biggest city boasts quite a few superlatives and is known as the commercial, cultural and congress centre of Switzerland. It is the hub for train, road and air traffic, which gives it a big advantage over its competitors. It offer great congress infrastructure in the Kongresshaus Zurich and numerous other spaces, acccompanied by some amazing special venues. Congress guests will appreciate the excellent public transport, which, in combination with great public infrastructure, is a must if you want to stay at the top of your game.

Unsurprisingly, the city of quality beer, wurst, dirndl skirts and “lederhosen” is also a first-class European congress destination with one of the most developed fair infrastructures in the wider region. There are 31,000 hotel rooms in 395 excellent hotels with conference capacities. Added to the charm and picturesqueness of the Bavarian capital are numerous green open spaces and a high quality of living. Munich airport is also one of the key European air-traffic hubs, cementing the city’s position on the world congress map. Its history has always been distinguished by major events, including the 1972 Summer Olympics. In the world’s beer capital with centuries of tradition, beer doesn’t just flow freely in October, but the whole year round. The city belongs at the very top of our evaluation.

Edinburgh is a top convention destination, which is blessed with outstanding cultural and historical heritage. The destination is in its mature phase, with a fully-developed congress infrastructure and excellent destination management. Four universities and numerous centres of excellence in science and art related to the Edinburgh Science Triangle are a guarantee for further successful development of the destination. Congresses and events are a part of a scientific breakthrough and further development of the city, as it stimulates numerous multiplier effects. The key stakeholders in Edinburgh are aware of this and this message should also be transmitted as an example of best practice in new European destinations.

Prague has for a long time not been an Eastern European gem, but a true European tourist metropolis with a diverse and comprehensive offer, luxury hotels and sometimes too high prices. The story is reminiscent of Škoda, of which the Czechs are very proud and is one of the oldest automotive in Europe. Reputable, solid and reliable pre-war limousines were after the war changed by cars that were behind the times. Today, Škoda’s shine, again and again, puts the Czech manufacturer where it once was. The same can be said for the meetings industry, where Prague began to seriously falter the locations top of the European league. If we look at the position of Prague regionally, Prague certainly has all the conditions to remain one of the most popular congress destinations for a long time.

Berlin is exciting in every sense of the word and one can only speculate on the range of its different options in this congress ‘land of plenty’. The Convention Bureau is known for its ingenuity, creativity and the rich offer it brings together. Moreover, Berlin’s congress offer is jam-packed into a very reasonably priced package. It’s no surprise that the city hosts more than 115,000 events annually and this number is expected to increase once the new Berlin Brandenburg airport finally opens its doors. Fuse Berlin’s excellent congress offer with its urban heartbeat and you get a first-class congress destination. The city is also the capital of fun, dance, creativity, socializing and unforgettable nightlife, which sets it apart from its competitors.

Spain’s second largest city has become an annual stop on the congress pilgrimage to IBTM World. Its extroversion and trendy city architecture and design, in combination with a healthy dose of Mediterranean casualness, is all worthy of serious praise and admiration. Barcelona is a city that comes alive in the evening, when it becomes a paradise for lovers of cuisine, cool taverns and cultural icons. Barcelona’s list-topping luxury and designer hotels and a nearly perfect congress infrastructure have positioned the city at the very peak of Europe’s congress industry. Although it is battling its current “OMG, there are so many tourists!” syndrome, we believe it will soon evolve into a city where the congress industry becomes part of the positive transformation of an otherwise overcrowded destination.

A historic city with excellent connectivity to the rest of the world and where you will find infrastructure befitting a major European capital, but with better weather and in a more interesting location. The Athens allure includes 300 days of sunshine a year, more than 30,000 hotel rooms in 439 hotels, 95,000 sq.m of conference space, 1,000+ restaurants and 200,000 flights per year. All major hotels in the city underwent a refurbishment for the 2004 Olympics. Athens is an attractive destination in its own, very special way. It is a unique combination of the old and the new, set in a spectacular Mediterranean landscape.

Frankfurt is the most international city in Germany, the largest financial centre on the continent, the historical city of coronations, the city of Goethe and the Frankfurt School… In brief, the smallest metropolis in the world, in which there is a lot to discover at close hand.

Frankfurt Airport connects 293 destinations and over 65 million passengers walk through its gates each year – how’s that for airline connectivity? The airport is one of the key European air traffic intersections and also has a well-developed train and highway network to all of the major German cities. It only takes around two hours to get from the centre of the second biggest metropolitan region in Germany to Koln or Stuttgart.

Today Warsaw is one of the fastest-growing capitals in the EU and a city that can pride itself on a mix of new and old architectural styles. Its growth in infrastructure was strongly boosted when Warsaw was the host of the UEFA European Championship in 2012 and many new hotels were opened. The biggest congress hotel, the Hilton Warsaw with a hall for 1,600 participants, is one of the biggest in Europe, but The Palace of Culture with its 40 congress halls is also an interesting option.

Budapest enjoys a very favorable position in Europe, at the crossroads between the East and the West. It is one of just a few cities in the world that literally lies on thermal springs and to which the Danube River gives a special experiential value. The city has no shortage of picturesque special venues nor the most luxurious hotels and crazy and diverse incentive locations. If Prague is love at first sight, then Budapest is love on the long run. All this has been for many years an excellent and well-established MICE destination with well-oiled congress
machinery.

TOP 5 XL DESTINATIONS OUTSIDE OF EUROPE