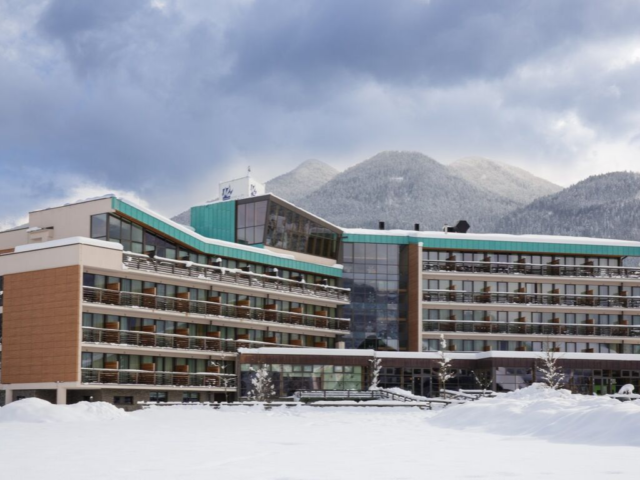 To put a hotel in Bohinjska Bistrica, which is less popular among tourists than Bohinj a few kilometres away, you have to be bold. As an entrepreneur to conceive of the biggest ski resort in Slovenia, which will open next year, you have to have a vision. And there is no shortage of this among the young Slovenian team of the first Slovenian eco-hotel that has received numerous awards and the admiration of its competitors. The hotel is located in the Bohinjska Bistrica, on the edge of the Triglav National Park and in the middle of the most beautiful Slovenian mountain scenery. The main tourist attraction is definitely Lake Bohinj, which is the largest permanent natural lake in Slovenia. With the opening of the hotel, tourism in this area, which already reached a level of prosperity before WWI but that later shifted towards the coast of the lake, has been revitalised,. The company is aware that unspoiled nature is their biggest asset, so the integrated environmental protection that they have chosen is both logical and smart.

The main road to Bohinjska Bistrica runs along the Lower Bohinj valley, which connects Bled with Bohinj. The main Slovenian airport is relatively close and the route to the hotel takes about 40 minutes. The hotel can be easily reached by train, certainly one of the advantages and motives for the more environmentally conscious guest. During the high tourist and meetings, season parking can be a problem, but the hotel guests are well served by the hotel’s own garage and its own parking space.

At first glance, the hotel exterior doesn’t take your breath away. The architecture is typical of many hotels, but it is in its use of natural materials that the hotel fits more organically with the surrounding environment. The main feature, however, is hidden from view: so that the hotel’s impact on the environment would be minimised, it has its own water borehole to heat the hotel. As one of a range of built-in technologies, such as LED lighting, this is probably the most economical hotel in Slovenia, on which point it is unparalleled both at home and abroad, but guests come mainly because of the wide range of offer and the location. Wood, stone and glass dominate the interior, which is decorated in warm colours and gives the impression of familiarity.

Staff working at the hotel do so from the heart. It is probably the young management team with a lot of positive energy who is largely responsible for this. Even in their cuisine, green standards are being applied and they are committed to serving local food, which one can try at the well-stocked breakfast. The solid signature restaurant 2864, although suitable for the more demanding guest, is not excellent or comparable with some of the 5-star restaurants.

The rooms are spacious and of minimalist design. Compared to some of the more renowned hotels they lack a little of the hotel-room pampering by way of various gadgets that can often be found. If you’re lucky, you will be in a room with a balcony enjoying the view of the highest Slovenian peak and be able to admire the beautiful views of the surrounding mountains. As befits a hotel of this class, the hotel lobby is well equipped and comfortable; you’ll like it if you like cosy, modern and warm hotel lobbies in preference to the more traditional hotels.

The naturally daylit convention centre can accommodate up to 220 participants in 8 different conference rooms. When the weather allows there is an outdoor terrace for coffee breaks or to simply enjoy the views.

2864 is a number behind which is hiding the new ski resort with a modern cable car system and over 40 kilometres of ski slopes and a summer cycling park.

Some pretty dark hotel corridors. A computer system that provides temperature control is supposed to create optimal conditions for the stay, but when the system does not always succeed in creating the best temperature the guests are alternately frozen or heated.

Bowling for many conference guests is an unusual, but highly welcome offer, which can bring a pleasant and relaxed end to business meetings and conventions. The main plus points are undoubtedly the ecological efforts of the hotel, which is the first of this kind in the region.

Pioneering is not easy, especially in the field of tourism. The hotel is a real hidden treasure and is actually very well managed, but we wonder why they did not prefer to go for 4-star superior category, into which they could easily fit¸ as for the 5 stars they sometimes fall short in the field of standard service and cuisine. They lack the hotel glamour of the more famous alpine tourist destinations. It is true that they are the first in the field of sustainable tourism, but is it worth the higher classification and the price? For some, certainly; for others, the equation does not work out and they will instead explore alternative solutions, but the hotel is nevertheless an excellent choice. It is important that congress organisers also have available a hotel that is friendly to the environment. In short, if you are willing to accept some disadvantages, the Bohinj Eco Park will sit at the top of its class.