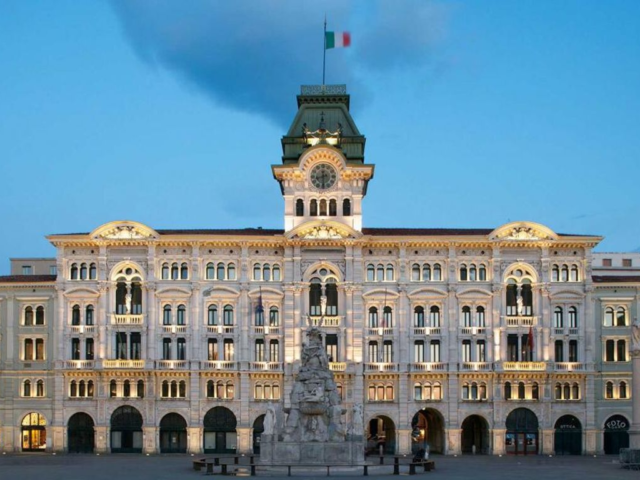 The imposing buildings of the Habsburg period on the central Trieste square Piazza Unita continue along the central coastal road into an impressive building of the Savoia Excelsior Palace Hotel. This historic hotel which opened in 1911, is today exemplary renovated and offers views of the Gulf of Trieste and is only a stone’s throw away from the convention centre. It is reminiscent of the old glory of the city when it had its own particular identity, which is also Austrian, Slovenian, Croatian, Jewish and above all multicultural.

For centuries Trieste was an important transport hub and main port of the region. Consequently, the trans- port infrastructure is still very good. Train infrastruc- ture is solid and as part of the Italian rail system is among the more developed in the region. Perhaps the worst part is air accessibility, where the city depends on the nearby airports in Ljubljana and Venice, as Trieste airport has less frequency. The airport con- nects around 15 destinations with 12 airlines.

Exemplary renovated historical building from 1911 was at its inception one of the most exclusive hotels in the Habsburg Monarchy. After two years of renovation, which was completed in 2009, the hotel shines in the former beauty. The external appearance does not stand out as much with its stylish lines, but mainly by its magnificence. For the interior design of the hotel, we can say that less is more. Much more, as they take care to move forward in the internal arrangement of rooms that simply thrills and in which you can easily flow into and which it does not disappoint you.

The hotel convinces with the quality of service. But this is not the only speciality of the hotel. Advanced culinary experience begins at breakfast and continues in the À la carte offer of the restaurant Savoy. No wonder the hotel is a central venue of all important events in Trieste, film stars, politicians and the elite. Guests are pampered with extra luxury at the hotel, which includes a special pillow menu “pillowmania” and a well-stocked bathroom full of little details.

At the hotel Savoia excellence is observed in every step, touch and view. Materials in the rooms are natural, selected and fit nicely with the whole. Especially charming are certain rooms with balconies offering views of the Gulf of Trieste. Nowadays one rarely finds rooms with such high ceilings. Leather seating, warm colours, ambient lighting with the possibility of day-light, all of which offer very tastefully furnished conference rooms. The hotel has nine meeting rooms. Maximum capacity of the largest one is up to 320 participants.

A nice library similar to a home living room.

Perhaps the only downside is the slow wi-fi.

Trieste is a nice city with a lot of soul and many attractions. A city worth a visit and a great convention destination.

The Savoia Excelsior Palace is definitely a good example of why such hotels are still a big selling hit and a shining exception on the otherwise quite tired Trieste congress-hotel scene. The hotel with its offer is a good starting point for the re-launch of Trieste as a congress destination. Less can be more. Probably the most stylish first category facility also in the wider region.