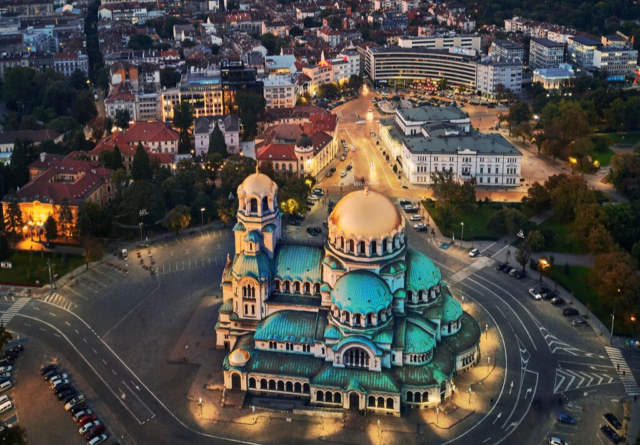 Q: In your opinion, what makes Sofia special?

For me, Sofia as a city is like a rainbow – A combination of different vibes and colours, history, religions and architectural styles, which sometimes may contradict each other, but all together combine perfectly – you see it and get amazed! Sofia, as the capital of Bulgaria, is blessed to be in the very heart of the strategic “Golden triangle” geographical territory, formed by the countries from the Balkans, the Black Sea and Danube region.

Sofia is a safe city, proudly developing its SMART CITY strategy. An easily reachable destination well connected with all European cities as well as constantly adding direct flights to long-haul destinations. Sofia is friendly and alive – if you are planning to be awake for 24 hours, there are numerous things to be seen and places to be visited – historical monuments, art galleries, museums, technology parks, shopping malls, modern co-working spaces, creative hubs, bars and restaurants. Once you see it, you will be amazed and will be looking to come back!

Bulgarian wines are an absolute must-try

Q: Where would you take someone to “feel” the vibe of Sofia and what is your best incentive idea in Sofia?

Let’s meet in the city centre and make an easy exercise: I am waiting for you next to St. Sofia statute. It is easy for you to get here, a couple of transportation options, as well as the underground – exit at Serdika station.

So we are now facing the St Sofia Monument, which is the symbol of the city and I will lead you through a very easy exercise, where we will make just a slow 360 degrees turn.

Starting with a 45 degree turn into the right, you are able to see some estate buildings – neither modern, neither old in style, classifying them as “ordinary”. Look a bit further down and there is the corner of the Central Sofia Market Hall, known popularly simply as The Market Hall. It is a covered market now, opened back in 1911 and is today an important trade centre in the city. If you are a food lover, you better plan to spend a few hours there during your next visit.

Keep turning right, adding roughly another 15 degrees, and you see the Banya Bashi mosque, which is the only functioning mosque in the town. It was built in 1576, during the years of the Ottoman rule of Bulgaria. The Mosque is famous for its large dome and the minaret rising upward to the sky. Reaching just over 90 degrees, you’ll see the building of the Central Department Store popular in Bulgaria with the abbreviation TsUM /ЦУМ/. Designed in 1956 and being the most modern building of its time, the Central Department Store was a must-stopover place for every visit to Sofia. People from all over the country came to TsUM for every major purchase because they could find everything in there. Next to it – the Council of Ministers and the Presidency.

So, now at 180 degrees – we leave at our backs the St Sofia Statue and face the Largo. Don’t you get the same feeling you want to fly? Straight ahead – the building of the former Communist Party House /Bulgarian: Partien Dom/, which is now used by the National Assembly of Bulgaria. Though today the building is mainly used as Government offices and the splendid Sofia Hall is occasionally used for charity concerts, it is an evidence how former Communism leaders in Bulgaria made their effort to follow the whole Communism concept and establish an impressive building with the intention to house the Communist Party Central Committee.

As we have mentioned the Presidency already, keep going and you will see the head office of the Ministry of Education. No, this is not another department store – the next glamorous building you see is Hotel Balkan, a Luxury Collection Hotel, previously Sheraton. You can’t see it from here, but if you decide to stay there or to explore its meeting facilities, in the backyard of the hotel is located the Church of Saint George, which is an Early Christian red brick rotunda that is considered the oldest building in Sofia.

On your right, St. Nedelya Church and St. Nedelya Square. I know it might be difficult to see it from here, but over there, where the tram makes a left turn, starts the Vitosha boulevard. It is a lively pedestrian area, full of bars, restaurants and trendy shops, so the choice is yours, we are going there! Reaching the starting position, on your left, that modern building is the headquarter of UniCredit Bulbank.

Okay, we are done here! I hope you enjoyed the journey throughout the centuries, seeing emblematic monuments related to our history, culture and traditions in a simple 360 degrees turn.

My best incentive idea in Sofia – let’s face again the Vitosha boulevard – you are lucky today – it is clear so you can see the Vitosha Mountain! We are so lucky as a capital city to have a Mountain so nearby, therefore my incentive idea is definitely related to it! Depending on the season, we can schedule various activities, and though it is not our most famous mountain resort, I bet the incentive trip will be remembered. I am giving no further details, as we should leave some suspense for the forthcoming groups!

Q: What do you see as crucial marketing elements to lure meeting planners?

I believe in those simple rules:

Q: What was the most important event in Sofia 2019 (MICE event)?

In 2019 – with no doubts – WEBIT.Festival – leading in size, the overall number of speakers, international & national delegates, the total number of attendees, number of days, number of sessions, industries covered, government support, marketing campaign. Brilliant job – from its start to the very end!

Q&A: Daniel Šaškin, the man who brought WRC to Croatia

Volkan Ataman: “Excitement in people’s eyes is what inspires me”

Bohdana Jelemenska: “Not everything can be replaced by the online and virtual world”