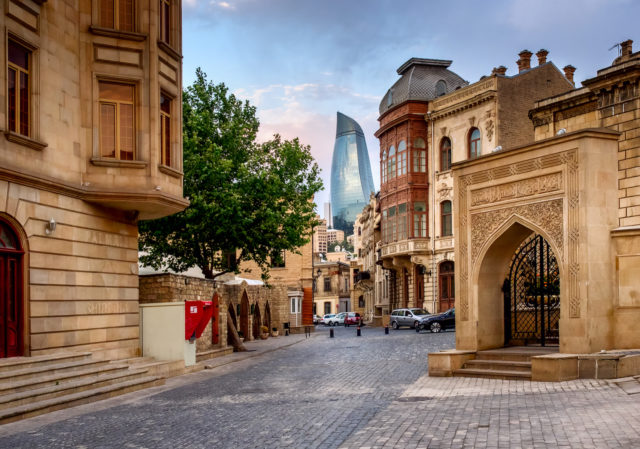 Looks to the east and to the west

What’s your take on Azerbaijan as a host city for your event? Ever wanted to host a MICE event there, but had some doubts?

We warmly advise you to visit the country as soon as possible and experience the immense hospitality and warm-heartedness of the locals first hand. To make the decision process easier, we are about to bust some of the most common myths about the country and its capital city Baku.

CONFIRMED: The capital city of Azerbaijan has the infrastructure and the capacities to host international mega-events. The current number of participants that the city is able to host in one day is 15,000 and the capacity of the largest stadium is 68,000. The hall where Eurovision took place can host 16,000 participants.

MYTH 2: Azerbaijan is the land of oil and fire

CONFIRMED: The country is rich in oil and natural gas and is known as the birthplace of the oil industry. Azerbaijanis have a strong connection with fire, one of their national symbols. Due to a high concentration of natural gas, a geological phenomenon has occurred. Yanar Dag or “burning hillsides” are caused by gas seeping through fissures in the earth and catching fire, creating an impressive natural sight. This even fascinated Marco Polo on his way to China.

MYTH 3: Azerbaijan is a Muslim country with strict rules

BUSTED: Azerbaijan is a secular country that is extremely modern and tolerant. All religious groups have equal rights, women are dressed according to the latest fashion and Azerbaijani lifestyle is distinctively European. Moreover, Azerbaijan was actually the first country in the whole of the East, to provide women with the right to vote.

MYTH 4: Getting a visa to travel to Azerbaijan is complicated

BUSTED: You will need a visa if you want to get to Azerbaijan, but obtaining it is super simple, without any complications or extensive paperwork. You can get your visa in as little as three days. According to many portals, Azerbaijan’s visa issuing system is one of the most user-friendly in the world.

MYTH 5: Azerbaijan is not an affordable destination

BUSTED: In comparison to Europe, hotel accommodation prices and expenses connected to event organisation are much lower. Low travel costs also make it a very attractive destination. For example, a half-litre glass of beer will hardly ever be over EUR 2 and coffee or tea are even cheaper.

BUSTED: In the Soviet era, prospects of education in Russian contributed to the intensive Sovietization of Baku’s population. Nowadays, language is still dividing the population in two, as schools and universities are providing education in both Russian and Azerbaijani.

MYTH 7: Baku is not safe and poorly accessible

BUSTED: Air connectivity is really solid and the modern Baku airport is directly connected to 53 destinations. A good sense of safety raises the overall well-being of meeting participants and public transport infrastructure is also well maintained and orderly.

PLAUSIBLE: This is partially true, but because of rapid development, the face of the city is changing and becoming ultra-modern. You will still find some reminders of Soviet times on the outskirts of Baku, but once you get to the Boulevard promenade, your jaw will drop.

BUSTED: This could not be further from the truth, as Azerbaijan’s wine industry dates back to the second millennium BC. Winegrowing in Azerbaijan was stopped by the Soviet Union prohibition law in 1985, but from 2012 onwards, the quality and production quantity of Azerbaijani wine have steadily been increasing. They are especially proud of their pomegranate wine, which you should certainly try.

MYTH 10: The Caspian Sea has freshwater

BUSTED: Throw away your old geography books, as the Caspian Sea is not a lake. It’s the largest body of water that is not connected to world oceans. It also sits in a geological depression, making it an endorheic basin that rivers drain into, the Volga being one of them. The Caspian Sea has saltwater, but the salt levels are much lower than those of oceans.