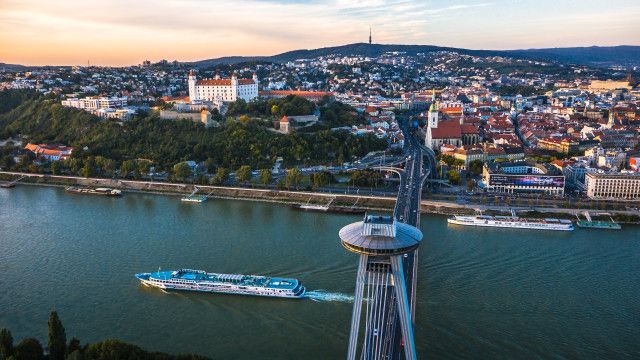 Danube river, the second longest river in Europe, has a long history. In the times of Roman Empire the Danube was a long-standing frontier. Today the river flows through 10 countries (originating in Germany, and passing through Austria, Slovakia, Hungary, Croatia, Serbia, Romania, Bulgaria, Moldovia, Ukraine to the Black Sea), which is more than any other river in the world. The Danube route was a traditional trade route in Europe since the ancient times, and even today all the 2,415km of its total length, is navigable. The river is also an important source of hydropower and drinking water.

Only 30 years ago the river was divided between East and West, separated with barbed wire and soldiers, but today is again a part of a united Europe, and unites the two halves of the continent, and brings political, economical and touristic benefits to the countries along its course.

“Tourism is the emotional bracket; it brings people together through the discovery of each other’s cultures, nature and cuisine.  At this year’s conference the organizers want to look back at the opening of the Danube, unhindered navigation and all the possibilities that the river offers with its different countries, bustling cities, landscapes, peoples, and diversity of touristic opportunities.” (www.donautourismus.eu)

This was also the main reason for choosing this years theme of the conference: Building Bridges—Thirty Years of the Free Danube. Slovakia’s minister for transport and construction, Mr. Arpád Érsek, has undertaken to act as patron of the 24th Danube Shipping and Tourism Conference.

Leisure and travel cruises are of great significance. The most popular and frequent route is from Vienna through Bratislava to Budapest, where over 70 cruise liners are in use on the river.

The Danube region is not only culturally and historically of importance, but also due to its fascinating landmarks and sights important for the regional tourism industry. With its well established infrastructure regarding cycling, hiking and travel possibilities, the region along the Danube attracts every year an international clientele.

The 24nd Danube Shipping and Tourism Conference will take place in Bratislava, Šamorín at the X-Bionic Sphere Hotel 2–5 December 2019. This year again, the conference serves as a platform for the industry to exchange news about the latest developments and trends.

The 24nd Danube Shipping and Tourism Conference will take place in Bratislava, Šamorín 2–5 December 2019. This year again, the conference serves as a platform for the industry to exchange news about the latest developments and trends.

Participants of the conference will also have the opportunity to explore the new boat Harmonia. The boat was successfully put into operation with the inaugural voyage on the 10th of October, and will for sure quickly be on the event managers lists of Danube venues.