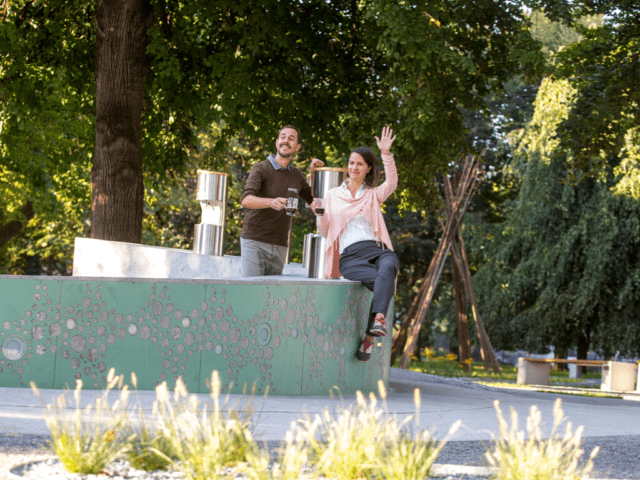 First Beer Fountain in the World

Fountain of the Green Gold represents a tribute to the hop heritage of Žalec and Lower Savinja Valley, which embodies the centre of hop growing industry in Slovenia. The Green Gold Fountain is a tribute to the hop growing heritage of the Lower Savinja Valley and Žalec, which is the hop-growing centre of Slovenia. Slovenia is also the fifth largest producer of hops in the world and hop is the “spice” that gives beer its distinctive flavour. The Green Gold Fountain is the result of these efforts.

Beer brewing industry also has a rich history in Slovenia. The first documents testifying to the brewing of beer on our territory date back to the 13th century. At the end of the 19th century, small breweries were quickly expanding across the land and the largest ones were capable of brewing up to 3,000 hl of beer. After WW1 all the Slovene breweries merged into a joint-stock company. Vrhnika and Mengeš stopped brewing beer in 1922, and the year 1925 was fatal for Kočevje, Kranj and Žalec. After WW2 three large breweries were established: Union, Laško and Talis. New smaller breweries started to appear, such as the Adam Ravbar brewery from Domžale, the Kratochwill brewery and others.