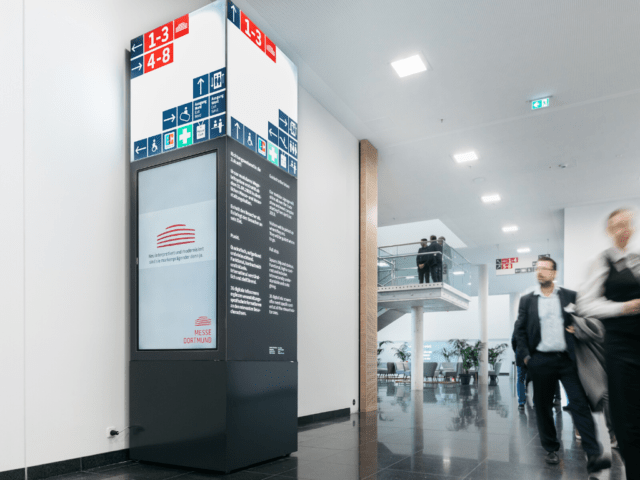 Messe Dortmund is further expanding its existing digital-signage network by installing 18 innovative multi-function columns, so-called “InfoS” throughout the exhibition grounds. These information columns with a height up to 3.5 meters combine analogue (constantly visible) with digital (temporary and alternating between visible and invisible) information for a targeted trade fair visit. The 18 information columns are controlled by the digital-signage software solution kompas from dimedis. The absolute highlight: screens are located on two opposite faces of the information columns, which, besides easily understandable visual route guidance, also display digital content. This includes up-to-the-minute information about the ongoing trade fair program, advertising from participating exhibitors, image campaigns with photos and videos as well as warnings and evacuation instructions that can be displayed at short notice in the event of unforeseen occurrences.

Thomas Malms, dimedis’s head of product development and integration for kompas, talks about the new digital-signage project at Messe Dortmund: “I am convinced that the information column concept will be exceedingly well received by the visitors, on the market and by advertisers. This is the starting signal for a new approach towards sensible combinations of digital and analogue media.”

With the exception of the power supply cables, the columns are completely wireless and operate via the trade fair’s in-house WLAN network. Every content update is sent to the columns via WLAN and saved locally in each column’s own fail-safe industrial mini PC, a slot-in computer integrated into the display to ensure that the most recently transferred content is still stored locally in the event of a network failure.

65-inch screens from Philips in portrait format are used. The information columns have a lockable roller system and can be pushed to a new location by a single person if required. The upper section of the information column with an LED backlight functions as an eye-catcher and directs the trade fair visitors to the respective halls and the nearest service points. The columns designed by the Austrian company Typico based in Lochau are square-shaped with a side length of 1 meter. The multi-function columns are located at all intersections on the exhibition grounds and thus act as an easily recognizable source of information as well as an orientation aid. The columns were used for the first time during Germany’s largest sustainability fair, FAIR FRIENDS, in September 2019.

Messe Dortmund uses kompas in the North Entrance, in the congress center, in the Mercure Hotel Dortmund Messe und Kongress and in the exhibition halls for the digital menu boards in the restaurant areas. Messe Dortmund has been relying on kompas since 2008 to control the total of 120 digital-signage installations on the entire exhibition grounds.