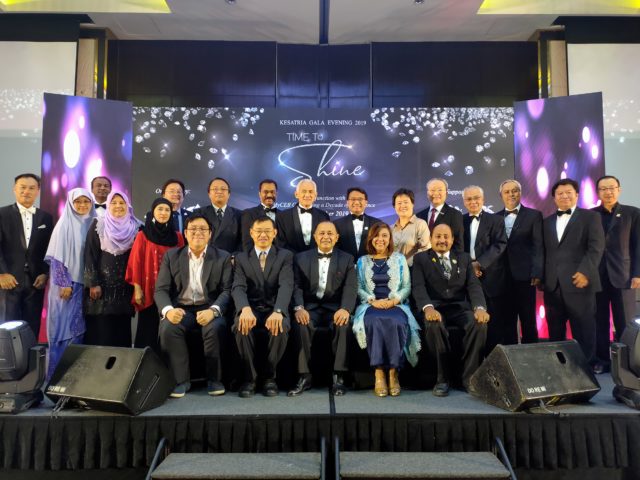 Attended by over 120 association representatives and industry players

The Malaysia Convention & Exhibition Bureau (MyCEB) held its 8th edition of Kesatria Gala Evening at the Pavilion Hotel Kuala Lumpur last night. The annual event which expresses appreciation and recognition to the nation’s conference ambassadors for the business events industry was attended by over 120 association representatives and industry players.

Having carved its reputation as the authority of the country’s business events industry, MyCEB is known for many strategic and purposeful efforts that have placed Malaysia in the global map as Asia’s Business Events Hub.

One such effort is the long-standing Kesatria Malaysia Programme which is modelled under international conference ambassador programmes.

Speaking at the event themed “Time to Shine”, Datuk Zulkefli Hj. Sharif, Chief Executive Officer of MyCEB said that the Kesatria Malaysia Programme was launched in 2012 with the aim to encourage these industry champions to continuously pitch Malaysia to the global business events sector and in turn, be rewarded with stripes as great economic and knowledge contributors for the country.

Datuk Zulkefli noted the effectiveness of the Kesatria Programme, stating that, “We have successfully developed 145 business events leads, with approximately 223,516 delegates and the potential contribution of RM3.2 billion in economic impact to the country since the commencement of the Kesatria”.

Datuk Zulkefli also revealed, “Drawing from this, 47% of bids were won and supported with 73 secured events, amounting to approximately 113,514 delegates and RM1.5 billion in economic impact. A strong testament of how beneficial the Programme is”.

“I have worked with MyCEB in generating leads to bring conferences of my area of expertise to Malaysia including the World Wound Healing Congress. It is a whole new experience to be in an industry such as business events and very eye-opening. It is definitely a phenomenon that will continue to grow, and I am glad to be part of it. I look forward to exploring more leads for Malaysia with MyCEB” – Prof. Dr. Harikrishna K.R. Nair, Founding President of the Malaysian Society of Wound Care Professionals (MSWCP).