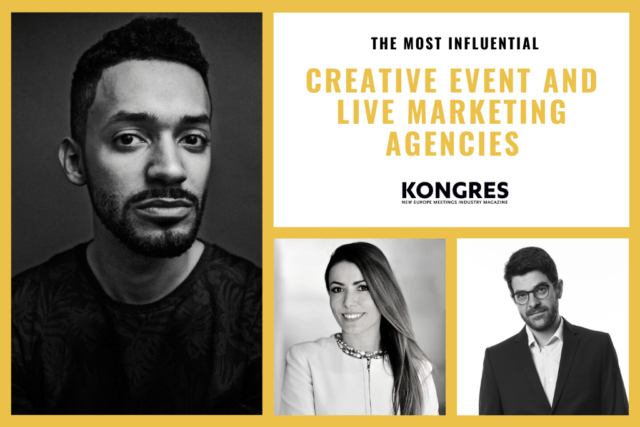 The CREATIVE EVENT AND LIVE MARKETING AGENCIES with the most votes are:

Yemi founded and now leads creative agency JAD Productions, with which he works not only for clients such as Google, T-Mobile, or Coca-Cola, but also produces his own projects. Teniskology (a multi-day european sneaker festival), Ynspirology (an arts, music and inspiration festival focused on Generation Y) and Cycles (disruptive, highly artistic immersive theatre). JAD Productions was awarded as Best Event Agency in the Czech Republic in 2014, 2015 & 2016, and received the World Best Event Award (BEA) in 2015, 2016 & 2018. Yemi’s team also won international awards for social media campaigns for adidas Originals and product launch for Mercedes-Benz.

She has founded her own company 18 years ago. Today, Rafaela Rica is a founder and manager of one of the biggest marketing and PR companies in Albania. The specialty of the company is that the team is literally the foundation stone of its success for most of the team members are part of the company since its creation. Iceberg Communications works in digital marketing, advertising, creative works, events, decoration, and PR & communication.

Ognena Vasiljević has founded her own events agency in Skopje, Macedonia. In its first year of existence, Momentum Inc. signed three innovative, large scale projects – the Health, Fitness & Wellness Expo, the Fashion & Lifestyle Expo as well as Showtime. The projects have by now grown into a tradition and are pivotal to the development of the events industry in the country. The agency is also realizing a number of events for clients from the corporate and NGO sectors in the country.

Matjaž is an entrepreneur, start-up lecturer, co-founder and member of the accelerator KIKštarter and the owner of ETC Adriatic, a corporate events agency. He founded his first start-up in 2011, when he and his team built a camping booking solution. Afterwards he continued his career in tourism as the founder of ETC Adriatic and in the start-up world as the initiator and founder of coworking spaces KIKštarter. He is also a member of the KIKštarter accelerator committee, where he participates in the selection of start-up ideas.

Vision Event is a five years old event management, marketing, and PR agency, doing business in Montenegro. Ivona Dabetić Jovović is besides being the owner and director the Vision Event, also a co-founder of regional Convention of women of Western Balkans with the main idea of empowering women in society. She is also the founder and president of NGO „Brini o sebi“ with the main goal of promotion of self-care and prevention of breast cancer. She is a moderator and speaker. She is a proud mother of an 8-year-old boy.

Established in 2002, EX-ALTO was the first Croatian agency providing experiential marketing and tourism services. In tourism EX-Alto has been mostly creating tourism experiences through leisure and entertainment in hotels and local communities. The EX-ALTO team of 7 permanent employees, along with numerous partners-professionals, constantly introduces new, innovative services to in key areas of tourism and event management. Since its beginnings, EX-ALTO has provided various lifetime experiences for more than 200 satisfied clients. One of the key components in this success has been Antonia Radić.

Ivo J. Franschitz owns a Master degree in International Marketing from the Vienna University of Economics and his early career milestones include Senior Marketing & Management positions in the Tourism and Business Events industry. Since 1999 he has been involved with a number of national and international educational institutions, and sharing his experience and knowledge through a variety of speaking engagements. Currently he holds a Board member position with EMBA (Event Marketing Board Austria) and with LiveCom Alliance (Pan-European Platform of National LiveCom Associations), as well as being an active member of ICCA (International Congress & Convention Association) and of 27NAMES .

Ivana has been at Projektil for 9 years but has more than 18 years of experience in dynamic project management and event business. During her career she has had the opportunity to initiate, participate and lead the organization of projects and events for marketing, media and communication in the entire Adriatic region.

M2Communications is a creative and brand experience agency. Miro Antić has 15+ years of international experience in the field of marketing and business development and has introduced a new dimension of event production by having designed one of the most spectacular in the region. He has participated in campaign development both in Serbia and abroad for global mega brands, such as BMW/MINI, Porto Montenegro, Microsoft, Fiat Chrysler Automobiles, BASF, Samsung, Rolls-Royce, Mercedes-Benz, Calzedonia, Jaffa Cakes, Vip Mobile, etc. He led his agency to several international consecutive awards.

Started as a casting manager at a time when that profession in Slovenia was as common as E.T. She climbed the ranks in TV & film production as a production manager, executive producer, script supervisor, AD, etc. She mastered event management in all its variations while freelancing for marketing and event agencies and finally embraced independence with Pirana Productions. A few years ago, a handful of dedicated individuals decided to face the challenge and put Slovene fashion on the map. The Zvereene Institute was established, and Ljubljana Fashion Week was born.

Newcomers in 2018, voted by readers

Elena established her company MaxiMICE in 2007. It is a complete cycle agency of professional operations in the field of business travel and corporate events capable of integrating all kinds of MICE, Event Marketing & PR services.

Boštjan is the Managing Director at New Moment for more than 6 years. Working in marketing and advertising has been a part of his life for 18 years and he already has 24 years of experience in advertising in the Adria region, where he handles 80+ brands. He is also Chairman of the Board of the Slovenian Association of Advertising Agencies.