In Zagreb, there recently took place a quite unusual conference. Or more specifically, an unconference. The Society of Architects Zagreb organised the second Think Space unconference (Think Space UnConference) at the end of February, which completed the annual cycle of competitions in the architect community called ‘Past Forward’. Architects from around the world were sending their work via the Internet and the best ones were selected, but the crown of it all was the unconference and the live meeting of interested parties who got not only a chance to meet with the winners, but also to share their ideas and views on current and future trends in the field of architecture. In doing this, the organisers decided to go beyond classical conferences with a pre-established programme and encouraged greater interaction and participation for participants, the format of open space being ideal for this because it opens the way for a more active co-operation, learning and creativity. The atmosphere of the entire event was heightened by being in one of the most visually interesting spaces (special venues) in Zagreb – the Gallery of Contemporary Art Lauba – a home for people and art and former military riding complex of the Austro-Hungarian army. 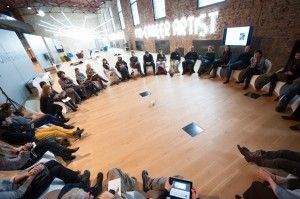 UNCONFERENCE VS. CONFERENCE
The term unconference was used for the first time in 1998 at an American IT event and was most frequently connected with gatherings of IT people and geeks. It is about unstructured conferences with no predefined agenda, but with a very clear purpose. Unconferences are based on participatory methods which have been used around the world over the past thirty years, like space technology, world cafe, circle practice and such like that enable a high degree of active participant involvement.
Unlike traditional conferences with a pre-defined schedule, speakers and topics, unconference participants are involved in creating their own topics for discussion or presentations that they deem relevant. At these events, a maximum of 25% of the programme is known, while the rest of the programme is completed on the spot. The open space method was devised by the American Harrison Owen in the 1980s and is based on four principles:
– Those people who come, are the right people
– What happens is the only thing that could have happened
– When it starts, it is the right time
– When it’s over, it’s over
Zagreb inhabitants Vesna Vrga Perović and Jasmina Lukačević have been dealing with participatory methods for years, and have been working together as moderators (facilitators) through the HUB Zagreb and Šesti oblik (sixth form) initiatives. They have also been collaborating with the Society of Architects Zagreb for years on the Think Space project. Both like to experiment and to open doors to new ideas.
“There is not a lot of wisdom here; the point is that in the preparation of the conference space, the distance between those who present and those who listen is erased, so for example you strip off the stage or put them in the same plane,” said Vrga Perović. “Thus, already in the set-up of space you create an intimacy between the presenters, participants and moderators, and open space for discussion and questions. In this way, people are opening up. The sum of the knowledge and experience of the people sitting in the audience is typically greater than the sum of the knowledge of the people who sit on the stage, and the knowledge that is otherwise closed in the public should be freed.”
This year’s Think Space unconference began with a presentation of the works of the architects and students of architecture awarded, while the next two days were marked by the open space concept. Participants offered themes important to them and were, depending on their own interests, divided into smaller groups, sitting and talking at tables, just like in a café. The most important ideas were then written down on papers that were later exhibited at the ‘Learning Wall’, visible to everyone. This process is called ‘harvest’ (harvesting) and represents a kind of reaping of benefits from the conversation. Also, using Owen’s ‘Two Feet’ Rule, those who did not find the interest to actively participate in one group, were free to move to another group. The advantage of such a method is that a large number of people can participate in the discussions, a couple of hundred or even thousand. It is fascinating that within a few hours the level of personal stories at the tables, things general to the fundamental values and the common image of the whole group, is created. It does not matter who said what, but what are the collective values of the group.
“No matter how good structured conferences are, because they give an overview of current issues and an opportunity for people to hear something new, people can not bring up their own topics that are important to them, so you often hear that the conference was good, but that the most important things have happened at coffee breaks or at informal gatherings,” said Jasmina Lukačević. “Unconference uses this principle of informal discussions, the right of mutual learning and experience, which in the long run can bring new knowledge and make a change in society.” 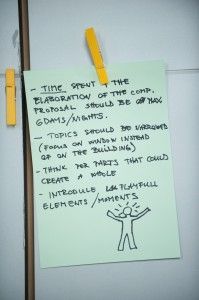 A GOOD MODERATOR IS WORTH GOLD
One of the most important figures at the unconference is certainly a good facilitator / moderator. The organiser defines the main theme and purpose, but the facilitator is the one who provides and explains the methods of work, includes people, guides them, opens space and a platform for co-operation. A good facilitator must be an expert in the methods used, and equally important is the inner feeling for the work with the group. He or she does not have to be too familiar with the theme of the conference nor with its content, but needs to know what the story is and who are the people who participate, so that they could be properly directed.
In participative work with people, there is not much operational preparation of the programme and speakers, but it is important to make clear to participants why they are invited to the unconference. Under the umbrella of a clear purpose people will propose their own theme for discussion, will invite others who are equally interested in it themselves and will define the agenda in accordance with what they are interested in at the moment and what is important to them. Organisers should be willing to give up the control in defining the programme and put the focus on the clarity of purpose. If the purpose and the theme of the conference is clear to people and they are offered the possibility to pose their own questions within the topic, and get quality education, then they will come. Tell them that the work part will be like a coffee break – this is a good argument for the sale!

Nature is an eternal source of inspiration

Marilka Tovarac: The art of conference sales lies in negotiation

Incentives on a green island – no cars allowed!

INTERVIEW: Those who know how to do it will succeed and...

Christian Woronka: “Focus on the time after the crisis”

INTERVIEW: Those who know how to do it will succeed and...

Christian Woronka: “Focus on the time after the crisis”