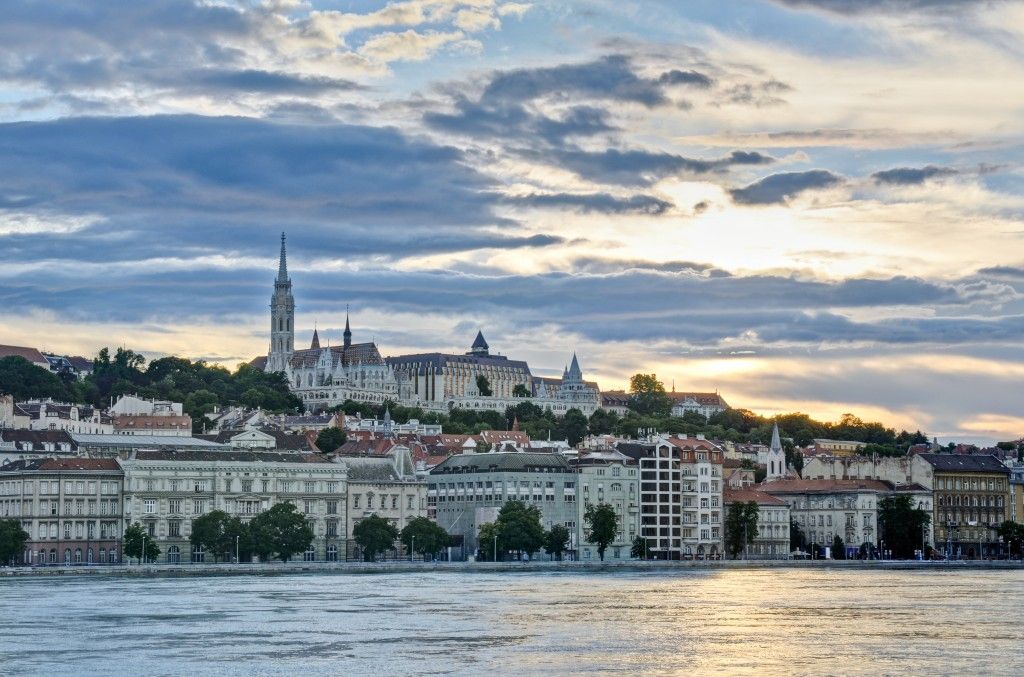 CONGRESS QUEEN OF THE DANUBE

The second largest city of the former Austro-Hungarian Monarchy is one of my favourite European capitals, where I feel at home. Even in times of gray it seemd to me colourful, cheerful and full of power of life. Through numerous visits I observed the transition of the city into today’s modern congress metropolis.

The first impression in the mighty Hungarian capital city gives the Danube River, which divides it and through picturesque bridges connects historic areas of the city Obuda, Pest and Budim. All three parts are connected into a whole since the year 1872, when the city developed into one of the major European metropolitan areas. Paris of the East, pearl of the Danube are just a few of the terms with which the beautiful city may be poetically described.

Budapest can be explored for days, but you will always discover something new. On the left bank of the river inspires the oldest part of the city Budim on the Gellerthegy hill with the famous Citadella, underground labyrinths and beautiful views of the Danube. In the city centre you will be impressed with public baths, which can also be the most special venues for crazy parties. Under the city there are more than 120 thermal springs. The most famous spa is Gellert spa that is built in the Art Noveau style. In addition to it, there is also well-known Kiraly spa, which is decorated in the style of Turkish swimming pools. In the Pest there is the most famous Furdo Szechenyi, which is one of the largest spas in Europe.

Pest is known as the business part of the city with one of the most spectacular buildings in Europe, the Hungarian Parliament building which is built in neo-Gothic style. Personally, I prefer Pest, as it is more lively and cosmopolitan. Specialty, which is worth some interest are some points of so called Dark Tourism. Such is, for example. “House of Terror” or “Statue Park” with statues from the period of socialist realism. Attractions in the former centre of the former Austro-Hungarian Empire do not run out as surprises await you literally at every step.

Budapest has been among the eastern capitals the first one to get rid of the socialist feel, and in addition to Prague it quickly caught the cosmopolitan tourist spirit. The city centre is nicely arranged, the city is developing, worn-out buildings, green spaces and public areas are from one year to the next looking better. In addition, the Hungarian cuisine is excellent and a great value added of the city. You can learn to cook it yourself in culinary schools such as Chefparade where they like to organise cooking courses for conference guests. Personal experience at the last visit was excellent. Sense of security is good and the public transport system operates without any major problems. Budapest has among other things one of the first underground railways in Europe that still operates smoothly and without complications. The biggest added value for many Westerners are relatively low costs of food and entertainment and living in general. Air accessibility of the city is good, mainly thanks to low-cost carriers, which practically from the first to the last are putting Budapest on their maps. Nevertheless, after the collapse of the national air carrier Malev, low-cost carriers were not able to fully fill the shortfall, which is reflected in the somewhat lower availability of some of less important destinations.

Budapest is Hungary’s biggest tourist attraction. In Budapest, there are currently 256 hotels with a total of 22.000 rooms. Approximately 47 % of hotels are in a category suitable for congress tourism (4, 5 or more stars). It seems that the crisis has not affected Budapest too much, according to STR Global research each year Budapest is attracting over 3 million tourists who generate 7.3 millions of overnight stays. Most of overnight stays (87 %) are made by foreign guests. Still, the main tourist months are from April to October. The majority of tourists come from Germany, Great Britain and Italy. The fastest growing are tourist arrivals from Russia and China. According to the same survey, the average occupancy of rooms in the city last year was 64. In addition, positively has grown also the RevPAR , which last year amounted to EUR 53 as per data collected from 52 hotels. The average price of a hotel room last year amounted to EUR 135, 60 in a typical four-star hotel, which compared to other European metropolises is very favourable.

The wave of opening of new hotels has stopped with the opening of two upscale hotels in 2012, namely five-star lifestyle hotel Budha – Bar Hotel and Park Inn Hotel by Radisson. Major hotel investments in the current economic situation are not predicted. An important part of the overall tourist offer are virtually unlimited possibilities of shopping, recreation and night entertainment, which is ranking Budapest among the major tourist metropolis of Europe. Especially popular is night entertainment, which attracts many city- breakers for the club scene, restaurants as well as for traditional cultural offerings.

The meetings industry has experienced the largest decline between 2009 and 2010, but in recent years it has further strengthened and is now experiencing a positive growth. The biggest congress advantages of Budapest often include easy accessibility and value for money. In addition, the city has an exceptional concentration of world-class convention hotels. All this has resulted in a tremendous growth of congress tourism in the city. On ICCA scale and on the world scale in 2012 Budapest was on the 20th place and in Europe on the 15thplace, making it the third city in an important convention Bermuda Triangle Prague, Vienna, Budapest.

In the last 20 years there were built numerous convention hotels, the offer of restaurants is rich, special venues do not run out and it is impossible to list them in their entirety. Among the international congress first-class brands there are Kempinski Corvinus, Hilton, Sofitel, InterContintal, Boscolo, Le Meridien, Marriott Hotel, Aquincium in Corinthia and as a specialty Budha bar with its lifestyle story. These names will most often be found in connection with congress events. In Budapest you can organise your event at the highest level in hotels such as the Art Noveau Four Seasons Gresham Palace, which is considered one of the best hotels in Europe.

An important player on the congress scene is Hungexpo, which in 2005 was taken over by the French-Belgian multinational GL Events. On 356 hectares of land it has 8 halls with a total area of 70.000 m2. Hungexpo is the main organiser of trade fairs in Hungary, its flexible halls are also suitable for large conferences. Special locations for organising events just do not end, especially dear to me is the main city market, which is a picturesque and dynamic location. You can taste socialist times through a ride with a Trabant, the grandiosity of the 19th century at a Gala Dinner at the Central library Szabo Ervin and many other locations

Budapest is a place to enjoy and explore that offers a lot to congress organisers. It seems that despite the economic crisis which is facing the whole country it continues to live its life. Nevertheless, the crisis has not bypassed the city meetings industry, especially agencies. Quite a few agencies in recent years closed their doors. Currently they are undergoing a consolidation of the meetings industry for it to be ready for the new wave of demand. Interestingly, most of the events to Budapest are coming from abroad. According to estimates of the Budapest Convention Bureau 80% of them are such. Perhaps the reason lies in the exceptional concentration of top hotels. Among the selected 35 best hotels in Central Europe, according to a survey by Conde Nast Traveller 8 of them are in Budapest.

Drawbacks are that the city still does not have a true convention centre with a capacity of 1.500 and more participants that would attract to the city larger international congresses and facilitate the marketing game with Vienna and Prague. Therefore, the news which resounded in November, that they are going to build a new centre is encouraging.

Budapest has always belonged to the tradition and culture of the West and the forced stay in the Eastern Europe is already quite a faded memory. Specific added value give the city extremely professional and positive professionals who because of their Finno-Ugric linguistic connection are reminiscent of their Scandinavian relatives. Once you agree all the details everything will work like clockwork and without unnecessary problems. It’s no wonder that it is always attracting congress organisers.

A.    Natural and cultural factors                     4,50
One of a few cities in the world that literally lies on thermal springs and to which specific experiential value gives the Danube River. In the city there is just no end of cultural and historical attractions, which positions Budapest among experientially the most attractive tourist cities of Europe.

B. General and transport infrastructure    4,20
Budapest enjoys a very favourable position in Europe, at the crossroads between the East and the West. Moreover, even according to Mercer’s scale of quality of life it is among the first ones in Eastern Europe with a strong multicultural character. Accessibility of the city is excellent, as all roads in Hungary are leading to the capital. Excellently arranged is also public transport, which is known as reliable and the city as a safe convention destination.

C.    Tourist infrastructure                               4,60
The rich legacy of the Austro-Hungarian Monarchy in combination with sights of the socrealist period and affordability are the formula for an exceptional tourist  popularity of the city and a good occupancy of 22.000 hotel rooms. If we add to this an excellent hotel infrastructure and attractions such as spas, gastronomy and a rich nightlife we get a top tourist destination.

D.    Meetings infrastructure                            4,40
The winning combination of world-class convention hotels, additional incentive offer and good prices. Behind its main competitors Vienna and Prague Budapest lags in destination management and has a little worse image. We are missing a more proactive city convention bureau.

Comparison with the region
If put congress destinations of the New Europe in a football perspective, then in the first league dominates Vienna, which is immediately followed by Prague and Budapest. This has also shown on our scale on which Budapest among larger cities ranked third. The city has no shortage of picturesque special venues nor the most luxurious hotels and crazy and diverse incentive locations. If Prague and Dubrovnik are a love at first sight, then Budapest is love in the long run. In addition to the selection of 16 five-star hotels from Intercontinental to Kempinski and 61 hotels with four-stars it impresses with a unique specialty historic spa resorts. All this has been for many years an excellent and well-established MICE destination and well-oiled congress machinery. In addition, Budapest unlike its rivals is also a very pocket friendly congress destination.

Cool meetings
Hungarian cuisine is famous for its pepper and I can not imagine a visit of the capital without tasting the world famous specialty of Hungarian goulash. Thy cook it with different kinds of meat-  from veal or pork. There are plenty of versions and in the 19th century, it has spread via the Viennese cuisine around the world.