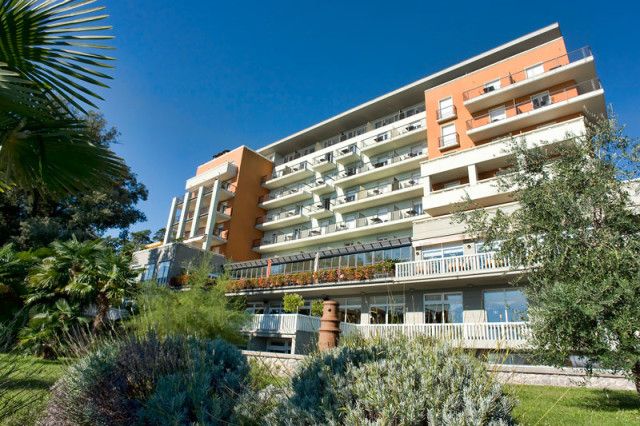 LOCATION Opened in 2004, the Grand Hotel 4 Opatijska Cvijeta announced a new era in meeting tourism and set new hotel standards in Opatija. This hotel in the heart of Opatija is in perfect harmony with its surroundings, located on Lungomare Avenue, and wellpositioned as one of the most important congress and wellness hotels. A prestigious villa used to stand at this very location, which was built in 1880; the second part of the hotel was once the Continental hotel with its famous coffeehouse. Today, after reconstructions, the hotel consists of four luxurious villas, which are named after famous flowers from Opatija: Camellia, Wisteria, Melia and Magnolia.

ACCESSIBILITY This is a great location by the Lungomare Avenue and Angiolina Park, only a stone’s throw from downtown Opatija. Among regional and local congress organisers, Opatija is a well-established meeting destination and therefore most guests arrive to the city by road. Its main advantage is that the city is only a fewhour drive away from all regional centres. In this respect, guests especially appreciate the hotel car park with 220 parking spaces. A few large airports are also a maximum of 2 hours away; usually, guests arrive from the airports in Rijeka, Zagreb, Ljubljana, Trieste, Pula and Venice.

COLD APPETIZER – Architecture and Aesthetics Architects were faced with the difficult task of taking into account the hotels’ architecture, which was built in the times of the Austro-Hungarian Empire, and the new central hotel and to connect them into a new functional whole. As a matter of fact, a new heart of Opatija with a central square was created, which is elegant, pleasant and functional at the same time. Inside the hotel there is no design surplus; nevertheless, the space is thoughtfully used and very pleasing. Generally speaking, the entire hotel complex is extremely well maintained and does not show its age.

WARM APPETIZER – Personnel and Cuisine Hotel services are harmonised, balanced and ordinary; this fulfils the wishes of many congress participants. It is apparent that they are always trying to raise the level of services, but somehow you get the feeling that quantity prevails over quality. The biggest advantage is the hotel’s breakfast with a bright variety of dishes, where even the guests’ special wishes are fulfilled. Furthermore, the wide range of national dishes is inspiring; based on this the hotel was awarded the Croatian national cuisine standard, which ensures that only national dishes are served. The personnel is very professional; this especially holds true for barmen and reception staff. They make an effort to fulfil the wishes of every single guest and are considered to be the hotel’s particular strength.

MAIN DISH – The Hotel‘s Congress Services The hotel’s rooms are predictably designed in a classical style, but are by no means dull. The addition of a few pieces of designer furniture makes the rooms more luxurious. After a decade, some rooms already show signs of ageing and intensive use and are due to be renovated. In some parts of the hotel (Begonija) the rooms can be smaller than one would expect. WiFi works perfectly and without complications. Laudable is the Tamaris Congress Centre, which is functional, spacious, and due to its eight halls very popular among event organisers. Furthermore, the connection between centre and hotel square, which can be used for receptions and outdoor events as well, is exceptional.

DESSERT – Extras The marina right in front of the hotel is a starting point for sailing trips and sight-seeing excursions on the Adriatic Sea.

FLOP – NEGATIVE SURPRISES The hotel is composed of 4 separated buildings and therefore finding your way around can be problematic at times.

TOP – POSITIVE SURPRISES Exquisite and by now legendary desserts created in the hotel’s confectionery named Milenij, which can be included in individual event menus.

FINAL IMPRESSION AND CREDIBILITY Renovation has changed this building into a substantial congress hotel, and although it was renovated ten years ago it still is in an enviable condition. However, if you are looking for a more prestigious destination, the staff of the Milenij hotels will be happy to assist you in finding a better solution within their group. Due to the spacious ambience, the pools and the nicely manicured gardens you will not run out of ideas for finding a perfect outdoor location for your event. A standard hotel of middle congress class, which attracts guests due to its price and how gracefully it defies age.