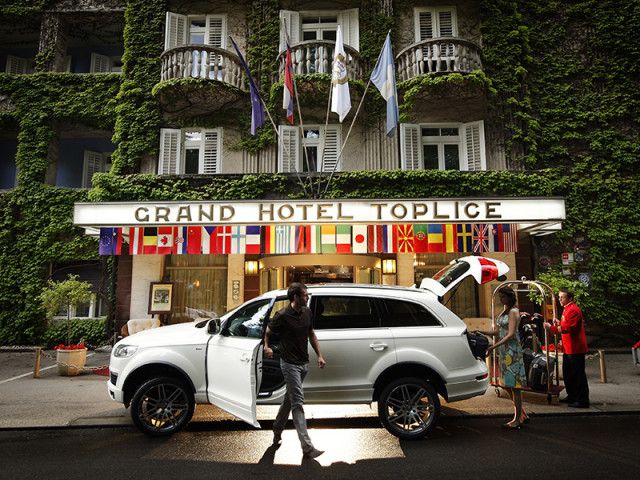 The renovated Grand Hotel Toplice has an illustrious history; unlike the many new designer hotels coming on stream today, it has throughout its years collected and absorbed numerous fascinating tales of the guests who have been passing through its doors. There is one stand-out story dating rightback to 1939, when Grand Hotel Toplice welcomed Mr. and Mrs. Humphrey. The newlyweds from England had chosen Bled as their honeymoon destination, but unfortunately during their stay England had declared war on Germany and with the closed borders of Europe the Humphreys encountered a number of problems making their return journey. On their safe arrival home they decided to hang the photo of the beautiful Lake Bled, taken during their honeymoon, on their living room wall as a daily reminder of the romantic time they spent together in Slovenia. Over the following years the couple had three children, all of whom grew up listening to stories about the ‘fairytale’ place of Bled and looking at the photo that was still hanging on the wall after so many years. In 2015 their daughter, Diana, decided that she would visit this beautiful place that her parents remembered so fondly. The traditional elegance of the hotel was just the way she had pictured it and she was so happy to experience it herself that she shared the story with the hotel staff and donated the original hotel receipt and caricatures of her parents made in Bled back in 1939.

What makes the Grand Hotel Toplice so special is its old world charm and quaintness. The creaking of well-preserved parquet floors and the smell of old wood are reminiscent of the many stories we hear in childhood; this is a place where the imagination can really come alive! The Presidential lounge radiates the history of the many important political leaders and diplomats who shook hands there and the many important agreements that were signed in that very same room. Every piece of the hotel tells its own story: the China with its gold logo, the silver plated accessories, the heavy furniture… Grand Hotel Toplice truly has an old soul that hasn’t lost any of its old charm.

The Grand Hotel Toplice is renowned for hosting the most demanding protocol, social, business and education events. The conference rooms are infused with the character, history and tradition of the hotel. The atmosphere is particularly pleasant thanks to the natural light and magnificent views of Lake Bled, but in order to enjoy the event in full, one also has to of course be well rested. Fortunately, the Grand Hotel Toplice is the King of comfort and relaxation, being one of the first hotels in Europe to have an air system that regulates the mattress firmness. For an even higher quality sleep guests can also choose the type of pillow they prefer and, before settling down for the night, enjoy the good energy generated by the thermal spring located next to the hotel. To top it all off, they can also visit the in-house wellness centre, where they can get fully re-energized and revitalized.