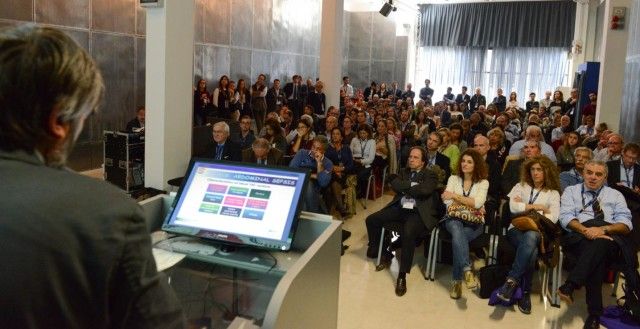 Combining Social Media and Innovation to Increase Participation and Sponsorship

Social media is a communications tool that is now required by audiences, which makes many associations still a little anxious of how to embark on this journey and manage the tools successfully. SIAARTI (Italian Society of Intensive Care and Anaesthesiology) saw the opportunities offered by social media, but needed the guidance and expertise in order to make it strategic and successful, but mostly lasting far beyond the event itself and imprinting it in the way the association communicates for the future. SIAARTI wanted to use it in order to increase interaction with participants, before, during and after the event, but also to create new opportunities for sponsors, reaching beyond the 2.350 participants at the congress and thus opening new fields for additional return-on-investment (ROI).

AIM Group created a structured plan which became operational three months before the event with its consistent campaign. The approach was to create an event within the event by combining the best traditional aspects of a scientific medical conference with innovations and social media. Social media allows engaging with the audience months before the conference begins. Interest and interaction was fostered among all interested parties, while building expectations and inspiring many to attend the event.

At the end of July, AIM Group created a weekly SIAARTI Newscast which broadcasted up to and throughout the congress, featuring interviews with various speakers on scientific issues on the SIAARTI YouTube channel.  The newscasts were then reposted on other social media channels (Facebook, Twitter) and received an average of 675 hits.

A photo contest on Facebook was created to enhance the presence of SIAARTI online and to reach more members of the association. The Scientific Committee chose the theme “Pain in an Image” and the photo with the most “likes” was recognized during the closing ceremony. The launch of the competition helped increase awareness and visibility of the SIAARTI Facebook page with a 63% increase in views as early as the first week of the contest.

Sponsors had enhanced social media involvement through posts dedicated to the scientific sessions. They sponsored various corners for “selfies” #SIAARTI2015, were on the splash page of the app (advertising pages placed when an app opens) and in the sale of virtual stands.

A new opportunity was offered to the sponsors with an innovation called a virtual stand. This feature allows a sponsor to be showcased on a Congress app. Companies have the opportunity to present their products, videos and company information even though they may not be exhibiting at the conference and they will be able to reach those users not attending. The virtual stand allows maximum visibility during a congress. These choices have proven successful. When compared with the results of the 2014 congress, there was a 10% increase of companies present and a notable 30% increase of participants.

The key performance indicator (KPI) set was surpassed and when looking at the relationship between investment and operating profit there was a good balance. It was recorded an increase in traffic on the Congress website (+70%), of followers on Facebook (+186%) and Twitter (+118%). During the week of the event, there was an increase of 211.4% of views on Twitter, an increase of companies sponsoring (+10 %) and acquisition of new contacts. AIM Group was thus able to design an activity on social media with measurable business objectives.

The President of SIAARTI, Prof. Massimo Antonelli, during the presentation of his three-year presidency,commented:

“I would like to thank AIM Group International for the strength and the tenacity with which they pursued the goal of developing social media for SIAARTI. We were able to approach a younger audience and keep our members updated.”