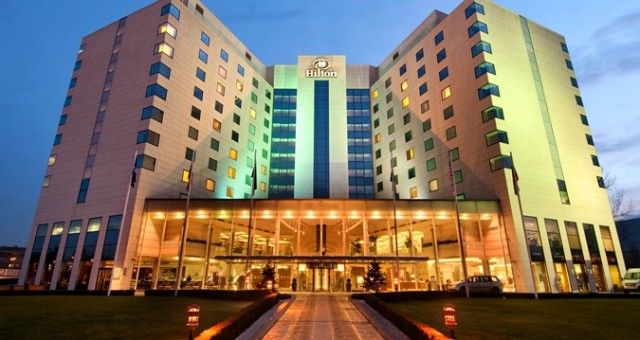 A landmark in the city of Sofia, Hilton Sofia has 245 spacious rooms on 8 floors, including Executive Floors, 16 Park Executive Suites and a brand new Presidential Suite. The comfortably furnished hotel rooms are all equipped with the most modern amenities. Guests also have access to the Executive Lounge where they can work in privacy, enjoy some time off or the complimentary breakfast, drinks and snacks throughout the day.

During the summer season Hilton Sofia offers free bicycle rentals to it’s hotel guests. You can take a city ride or go for a ride in the South Park Hilton Sofia, which has 5 bee hives.

Hilton Sofia opened its doors in April 2001 and became the landmark hotel to host guests from all around the world.

Hilton Sofia is situated within the lush South Park, thus offering its guests the opportunity to stay in the city center, yet in a quiet area and stroll, jog or simply relax in the surrounding greenery.

The Hilton Sofia meeting facilities provide 7 meeting rooms with daylight and a capicity of 2-50 conference or banquet participants.

All meeting rooms are located on one floor

Seasons Restaurant
At Seasons Restaurant you will be inspired by Bulgaria, as well as by the many cultures that come across in everyday cooking. That is why you will be served what is called ‘Bulgarian influenced cuisine’: combining the best of Bulgaria with the rest of the world. The renowned Executive Chef, Andre Tokev, as founder of the new Bulgarian cuisine, tries to use as many traditional, local and seasonal recipes and ingredients as possible. Celebrity Chef Andre Tokev has extensive culinary expertise, having worked at many highlight locations in Germany, at Hilton Vienna and Waldorf Astoria Berlin.

Top 6 Things to do in Sofia

The last week of August will be marked by Conventa