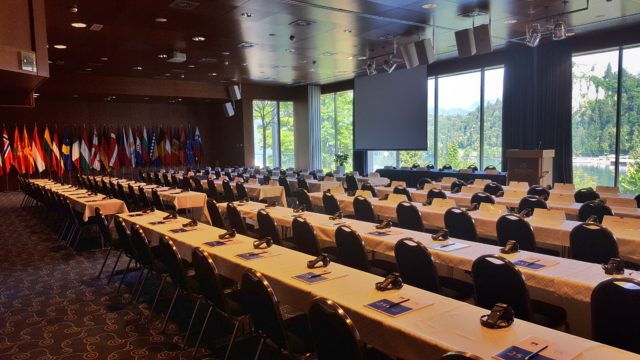 Constitutional Court of the Republic of Slovenia has celebrated the 25th anniversary of the functioning of Slovenian Court in the independent state by organizing an international conference. The event took place at Golf Hotel in Bled, Slovenia, from 22 to 24 June 2016.

Throughout the history, Bled and Sava Hotels & Resorts have been the hosts of many national and international protocol events; the city because of its unspoiled fairytale nature and Sava Hotels because of its outstanding congress services. The 25th anniversary of independence of the Republic of Slovenia has been celebrated with many events all over the country but the international conference taking place in Brdo and Bled over the past three days was something special. It was a closed event with eminent speakers that came from Belgium, Italy, Austria, Germany, Croatia, Slovenia, Hungary and Lithuania. The preparations for the event were extensive as the execution has to be impeccable. Sava Hotels & Resorts again made sure everything ran smoothly and that their staff was on-point.

The following morning the conference officially opened with the speech from the president of the constitutional court of Republic of Slovenia, mag. Miroslav Mozetič. Hotel Golf know for great multipurpose conference halls and green meetings offer was the main venue. After the conference, sessions and meetings were conducted during the whole afternoon and concluded with a dinner prepared by the excellent chefs of Sava Hotels & Resorts at Grand Hotel Toplice.

The last day of the gathering was reserved for strengthening business relations and exploring the breathtaking surroundings of Bled. The tour finished with delicious lunch at Vila Bled and the State celebration of Slovene National Day in the capital city of Ljubljana.