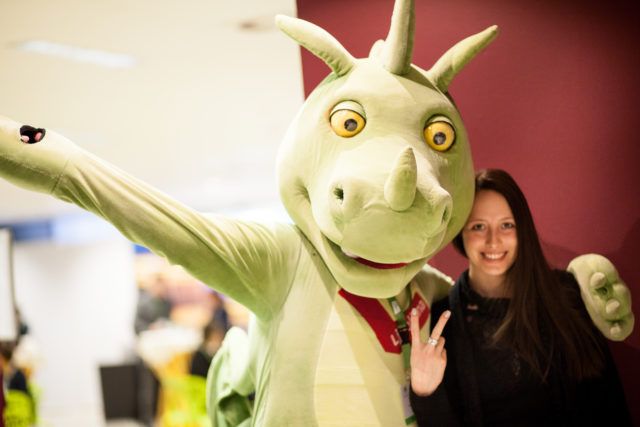 New Europe exhibition for meetings, events and incentives traditionally held in Ljubljana, Slovenia was again a big success with a record number of meeting providers and providers of technology solutions for the meetings industry.

149 exhibitors from 15 different New European countries, for the first time joined by representatives from cities like Krakow, Lviv and Košice, were presenting their services to 171 international meetings planners and around 100 regional and Slovenian meetings planners.

“CONVENTA STRIVES FOR QUALITY NOT QUANTITY”

A satisfaction survey conducted among this year’s exhibitors and hosted buyers showed that the trade show did evolve and has gained recognition among not only European meetings industry professionals but even wider. The Conventa team is proud to present the survey results that again proved high level of professionalism and satisfaction of all participants.

Hosted buyers were surprised by the boutique format and warm atmosphere

The ninth Conventa hosted 171 international meeting planners from 35 countries and around 100 regional and Slovenian hosted buyers. It is important to mention the fact that 95 percent of hosted buyers attended the show for the first time. This is overwhelming for the team since that shows huge interest for Conventa.

91,7% of hosted buyers attending the show said their participation did fulfill their expectations. On a scale from 1 to 5 the overall satisfaction with Conventa was rated with 4,50, while Conventa reputation received a slightly higher rate of 4,54.

The majority of the meeting planners attended Conventa because the organizers of the show personally invited them. More than 96% of hosted buyers attended the show for one main reason, which is One2One meetings between exhibitors and buyers. With a 63,6 % importance of networking possibilities ranked as the second main reason to attend Conventa.

Beside those two factors, their attendance depends also on offered fam trips (60%). Most of the participants are coming from distant countries and it is important to maximize their time here. This year organizers gave hosted buyers the opportunity to choose among a record number of fam trips and experience one of the eleven offered destinations by themselves. Success of their attendance depended mostly on the quality of meeting providers, network opportunities and knowledge they gained about the destination. While a number of meeting providers and a large number of prescheduled meetings are not among the main reasons.

They were very satisfied with several aspects of the show. With the trade show itself, to networking lunches and evening receptions. All aspects of networking events were highly rated, from setup to diverse range of food and drink.

The Conventa webpage was best rated among Conventa communication channels with 4,30 points, followed by Conventa catalogue 4,22.

The satisfaction with content of meetings was rated with 4,40, while web application for pre-scheduling One2One meetings was given 4,10 points.

The Conventa team gives a lot of attention to make sure hosted buyers feel welcome from the very first minute till the end. With the team’s personal touch, they wanted every hosted buyer to create their own Conventa experience. On a scale from 1 to 5, hosted buyers rated friendliness and effectiveness of the show organizer with 4,70. Hosted buyers were pleasantly surprised by the warm atmosphere and helpfulness of the organizers.

Conventa organizers know, how important it is, to improve the hosted buyers experience every single year. As in the previous years, they are again emphasizing the biggest challenge, which is the lack of flight connections to the host destination. The strategic position of Slovenia helps a lot when solving this problem, directing passengers to nearby airports.

“This was my first trip to this part of the world. I was very impressed with all the arrangements – organization, logistics, and the choice of the hotels. Also, the choice of restaurants and other venues was great. For me, it was a great opportunity to learn about this region and assist me in making my future choice as also advising my clients on the aspects of this wonderful region. To me, this was a very very satisfactory learning. I sincerely wish to thank the organizers and to the whole team that made this possible for me.”

“It was my first time for this Conventa, and the organization was very great. The distance between pits was completed. The quality of the suppliers was perfect. The team was kind and available. The ceremony was fantastic and the musical group was incredible! Thank you for all those good meetings!”

“Conventa is your gateway to Southeast Europe tourism business. At Conventa you can make new connections and do business in a really welcoming and pampering environment. Probably the best way to start your new year!”

“Conventa was one of the best Trade Fair formats I ever attended and also seems that this fair brings more value than others. For sure we will come again next year – this is already fixed. Have a great 2017 and see you again in 2018.”

“All organization was flawless. Everything was in perfect order. I also believe, the contacts we gained will be profitable. So see you next year! Thank you once again for your support! All the best until next time from Sarajevo.”

WHY DO YOU ATTEND CONVENTA?

The main reason, why exhibitors attend Conventa is still the opportunity to conduct face to face meetings with hosted buyers. Conventa offers plenty side events, intended for networking between meetings industry professionals, which is also a significant reason for exhibitors to participate.

In exhibitor’s opinion, the success of their participation has been influenced primarily by the quality of hosted buyers (97,2%), while number of visitors at the show and the stand is not one of the main reasons. What also contributed to the success was the total number of pre-scheduled appointments  and the actual number/value of orders received at the show.

On average, exhibitor realized 24,50 appointments during the two day show and had together with the meetings scheduled on spot 30 meetings. On a scale from 1 to 5, they rated their satisfaction with meetings with 4,2 and thought One2One meetings application was easy to use with 4,0 points.

More than half of exhibitors said their investment in exhibiting at Conventa will absolutely pay off and one third of them stated the investment will pay off partly.