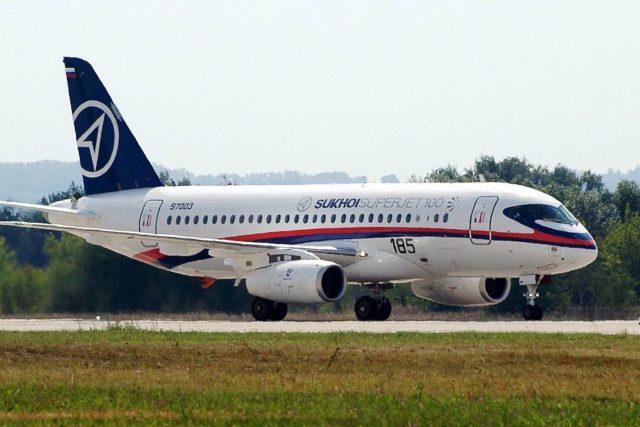 Adria Ariways plans to make an order for twelve Sukhoi Superjet 100 aircraft which will replace the carrier’s entire Bombardier fleet. Deliveries of the new jet are expected as early as June 2018. Russia’s State Transport Leasing Company (GTLK) will finance the transaction. Vladislav Masalov, President of the Sukhoi Civil Aircraft Company, said, “As part of the Paris Air Show, we will meet with Adria Airways to discuss the transaction which is being conducted by GTLK. The company is considering the purchase of twelve SSJ100 aircraft”. As reported by EX-YU Aviation News, talks over the order have been ongoing. “This is not the first session of talks between the two companies. We have been engaged in this project for over six months”, Mr Masalov added.
Once the talks are finalised and the transaction completed, it will mark the biggest single aircraft order ever made by Adria. Furthermore, the carrier will operate Russian-manufactured aircraft for the first time in its history. The development would also mark the loss of a notable European customer for Bombardier, as well as maintenance company Adria Tehnika, which is a regional Authorised Service Facility for base and other repairs on all Bombardier CRJ series aircraft. As such, Adria, with its fleet of nine CRJ jets, is its biggest customer. The Slovenian carrier is said to be in advanced stages of planning for the arrival of the new type, with crew expected to begin aircraft training next spring.

Sukhoi Superjet 100 celebrates its tenth anniversary since rollout this year. It has the capacity to seat between 87 and 108 passengers, depending on cabin layout and seat configuration. The SSJ100 has a single-engine option, the SaM146, manufactured by France’s Safran in cooperation with Russia’s United Engines. The Russian manufacturer is already planning a new generation of the regional jet with extended capacity, new wings and new engines, which is expected to appear after 2025. The first European carrier outside of Russia to operate the SSJ100 on revenue flights is the Irish regional airline CityJet, while Brussels Airlines has wet-leased some of the aircraft. “We expect that operations in Brussels will attract interest from other European airlines”, Mr Masalov said, adding that by the end of the year Sukhoi will have delivered eight Superjets to CityJet. Negotiations are also about to resume with Air France concerning the possible wet-lease of SSJ100s from CityJet.